Trump about-face on elephant trophies could be legal misfire 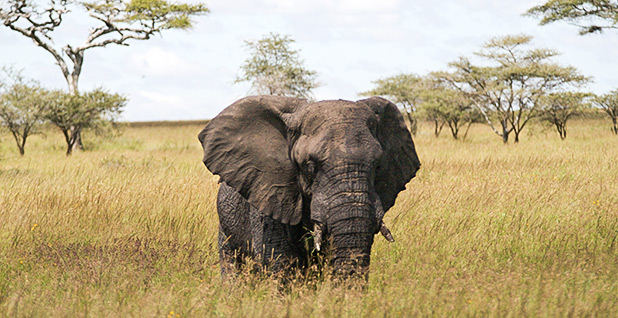 President Trump’s abrupt U-turn on elephant trophy imports could undermine his own appointees, break standard practice and all but invite a legal challenge from his customary allies.

Already, the president’s move has sent Fish and Wildlife Service officials scrambling to figure out how they might unwind a decision that was painstakingly vetted and formally published. The officials must also handle hunters who may have already received trophy permits.

"In my experience, it’s unprecedented for a final decision to be put on hold and reversed by the White House," former Fish and Wildlife Service Director Dan Ashe said in an interview today.

Citing the confusion, the Center for Biological Diversity and Natural Resources Defense Council sued the Trump administration today in a bid to keep the initial ban in place.

"Trump’s abrupt backpedaling after public outcry, while appreciated, shows how arbitrary this deplorable decision was. These incredibly imperiled creatures need a lot more than vague promises," said Tanya Sanerib, a senior attorney with the Center for Biological Diversity.

The mess follows Trump’s second-guessing of the service’s elephant trophy import decision that had officially been made public Thursday and published early Friday in the Federal Register (Greenwire, Nov. 17).

Citing a detailed 39-page assessment, the agency declared it could "make a determination that the killing of trophy animals in Zimbabwe, on or after January 21, 2016, and on or before December 31, 2018, will enhance the survival of the African elephant."

With the so-called enhancement finding, and a similar 23-page one for Zambia, Fish and Wildlife announced it would resume issuing trophy import permits for the two African countries. Each assessment examined what officials termed a "number of factors."

Within hours, facing heat, Trump said on Twitter that he would put the decision "on hold" so he could "review all conservation facts." He then retweeted commentators who praised him, and yesterday foreshadowed what he’s going to do.

"Big-game trophy decision will be announced next week but will be very hard pressed to change my mind that this horror show in any way helps conservation of Elephants or any other animal," Trump wrote.

Interior Secretary Ryan Zinke said in a statement that he and Trump had talked and "as a result, in a manner compliant with all applicable laws, rules, and regulations, the issuing of permits is being put on hold as the decision is being reviewed."

It’s extraordinary for an administration, let alone a president, to immediately put on hold an agency decision that had gone through routine procedures including final publication in the Federal Register.

"I never experienced anything like that," said Ashe, who served 22 years with Fish and Wildlife — nearly six of them as director — and now is president and CEO of the Association of Zoos & Aquariums.

Potentially, a legal challenge could be mounted by hunting proponents claiming that the reversal violated the federal Administrative Procedure Act. Safari Club International and the National Rifle Association cited this same law in a 2014 suit challenging the earlier import ban.

The Fish and Wildlife Service in 2014 had banned the trophy imports from Zimbabwe, after concluding that it could not make the finding that sport killing of the Zimbabwe elephants "would enhance survival of the species," as the law requires.

"Federal defendants … violated APA rulemaking procedures by abruptly suspending the ability of Safari Club members to import their African elephant trophies from Zimbabwe, without first giving the public advance notice and the opportunity to comment and without providing data," the 2014 lawsuit stated.

Summoning the words that can kill a federal agency’s decisionmaking, the hunting advocates in their 2014 suit further termed Fish and Wildlife’s earlier import ban "arbitrary and capricious" and "an abuse of discretion."

The lawsuit is now on appeal.

In a weekend statement, Safari Club International decried the "shrill, negative reactions" from "hysterical anti-hunters and news media outlets" and urged hunters to contact the White House and Interior Department.

The Fish and Wildlife Service has revised upward Zimbabwe’s estimated elephant population, citing in its new notice a 2014 aerial survey called the Great Elephant Census that pegged the number at 82,304 individuals.