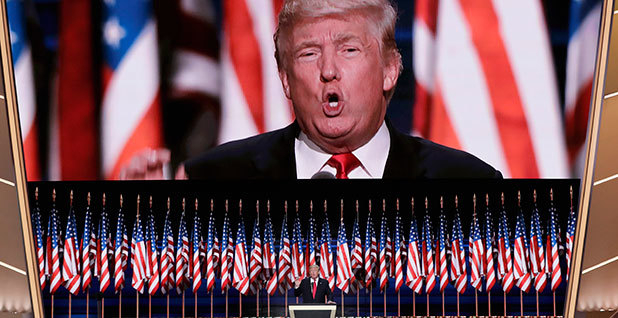 Donald J. Trump accepted the Republican nomination for president of the United States on the final night of the GOP convention in Cleveland. Photo courtesy of AP Images.

CLEVELAND — Donald Trump appealed to Americans struggling in coal fields and inner cities as a champion for the working class who will infuse wealth into a nation choked by crime and liberal policies, formally accepting the Republican nomination and launching the last leg of the presidential race.

Trump promised to repeal federal restrictions on oil and gas development and spark trillions of dollars in economic development in a showman’s speech last night closing a turbulent Republican National Convention less than four months before the election.

"Excessive regulation is costing our country as much as $2 trillion a year, and we will end it," he said. "We are going to lift the restrictions on the production of American energy. This will produce more than $20 trillion in job-creating economic activity over the next four decades."

Trump described rival Hillary Clinton as threatening to the languishing coal industry and its workers, such as in the important electoral states of Virginia, Pennsylvania and Ohio. He said Clinton "wants to put the great miners and great steelworkers out of business."

That’s been a frequent attack this week. Republicans seized on Clinton’s clumsy description of her proposed transition program for miners.

Trump answered: "Let’s defeat her instead."

The billionaire real-estate developer struck a populist tone by saying he’s a voice for the unemployed and crime-threatened.

"The problems we face now — poverty and violence at home, war and destruction abroad — will last only as long as we continue relying on the same politicians who created them," Trump said, blaming President Obama for rising murder rates in the nation’s largest cities.

"The number of police officers killed in the line of duty has risen by almost 50 percent compared to this point last year," he said. "Nearly 180,000 illegal immigrants with criminal records, ordered deported from our country, are tonight roaming free to threaten peaceful citizens."

Trump blamed Obama for overseeing a period in which too many African-Americans are poor and unemployed. He also expressed sympathy for struggling Latinos, a tonal contrast to Trump’s criticism of Gonzalo Curiel, the American-born district judge whom the nominee described as someone who cannot rule fairly because of his ethnicity.

The Republican nominee also suggested that Obama helped fuel the spate of shootings targeting police officers in Dallas, Louisiana and other places.

The convention didn’t shed new light on Trump’s ideas about climate change or how his administration would approach the issue if he’s elected president. He said in the weeks leading up to his formal nomination that he would cancel the Paris climate agreement finalized by 195 nations in December. Trump also called climate change a hoax late last year and said the Obama administration is mistakenly placing it high among national security priorities (ClimateWire, Jan. 7, 2016)

Environmental groups are clamoring to highlight the divide between Trump and climate scientists.

"On its own, his blatant ignorance of basic science and insistence that climate change is a hoax should disqualify Trump, but his racist rhetoric, ugly campaign and full embrace of the dirty fossil fuel industry put the matter to rest," said Clay Schroers, national campaigns director for the League of Conservation Voters, in a statement. "Donald Trump is an unacceptable nominee, and should never be president."

The convention showcased scores of speakers, but the climate issue surfaced only briefly.

‘Lives at risk’ from regs

Oilman Harold Hamm, CEO of Continental Resources Inc. and a key Trump adviser, suggested Wednesday that the Obama administration’s energy policies might be contributing to terrorism, like the mass shooting carried out by an American-born gunman in Orlando (Greenwire, July 21).

Climate policy hasn’t been totally absent this week. Rep. Kevin Cramer (R-N.D.), who is advising the Trump campaign on energy issues, downplayed his past comments supporting a small carbon tax. But it seemed like he didn’t rule it out completely. Pointing to one challenge, Cramer said swapping the Clean Power Plan, Obama’s signature climate regulation, for a revenue-neutral carbon tax is unworkable because it doesn’t prioritize carbon capture and sequestration.

Cramer also suggested that Trump is unlikely to see climate change as a top concern if he’s elected.

"I will tell you this, I think it’s quite clear that climate change is not a top-10 worrisome issue for Donald Trump," Cramer told reporters Wednesday (Greenwire, July 21).

Some of the 2,472 delegates here disagree with their party on the climate issue. ClimateWire asked 51 delegates if they think people are contributing to climbing temperatures. Twenty-three said that humans have an impact on climate. Seventeen said humans do not, and 11 answered "maybe."

"I make up my own mind," said Johnny McMahan, an Arkansas delegate who believes in man-made climate change. "It’s common sense to me, and that’s what I believe."

Others worry that the party is harming itself by continuing to question the science.

Jerry Taylor, president of the libertarian Niskanen Center, which supports a revenue-neutral carbon tax, said at an event here Wednesday that the party is ignoring moderate voters and losing them. Addressing climate change could help attract women, minorities and younger voters, he said.

"There is a bigger electorate out there, one that is entirely opposed to the direction that this party takes, and one which this party can talk to if it had the courage," Taylor said.