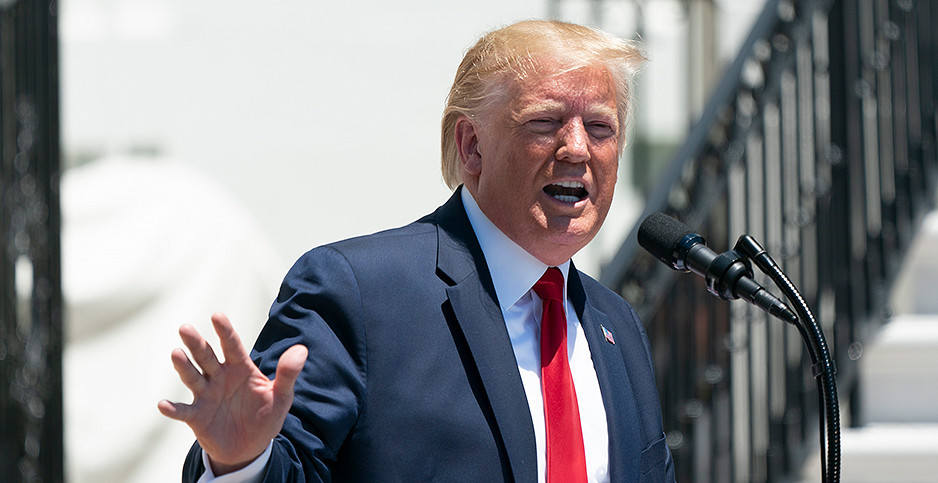 President Trump and his administration are abandoning an effort to race through the rollback of clean car rules. Chris Kleponis/picture alliance/Consolidated/Newscom

The Trump administration appears to have abandoned its initial strategy for defending the rollback of Obama-era clean car rules from court challenges, according to three people with knowledge of the situation.

The administration was previously rushing to finalize the rollback in early summer. Experts have said that would have given Trump lawyers more of a chance to defend it in court during the president’s first term in office (Climatewire, June 3).

But the administration seems to have forsaken that aggressive timeline, and the rollback is now expected to be completed after Labor Day, according to the three sources, who agreed to speak with E&E News on the condition of anonymity.

"We’ve been told not to expect the rule to come out until later in the year, probably after Labor Day," one source said.

Another said: "We’re now thinking that it’s probably not going to come out until after Labor Day. In fact, some people are thinking the end of September."

Once the rollback is finalized, litigation is certain. California and a host of environmental groups have promised to sue. The case is widely expected to reach the Supreme Court.

If the rollback had been completed in June, it could have reached the high court before November 2020, allowing Trump administration lawyers to defend the move — though some experts have contended even that timeline may be unrealistic.

Now the case likely won’t be litigated until after the elections, in which a Democrat could oust Trump. A new Democratic president would likely restore the Obama-era clean car standards, rendering the litigation moot.

The administration seems resigned to this outcome.

"If they had got it out a lot earlier, it would have been possible to get to a resolution on the matter before November 2020. But at this point, there wouldn’t be enough time," one source said.

"And that’s important because if a Democrat were to be elected, it is likely that they would probably pull the rule," the person said.

Another source noted that the final rule has not yet been sent to the White House Office of Management and Budget for review — typically a last step of the rulemaking process.

"The big question is, it hasn’t gone to OMB yet. And for a major rule, you can expect it to take even 90 days for OMB review," the person said.

"What we are hearing is that they’re still working on 10 or 12 issues. And I don’t know if any of those are big issues," the person added.

President Obama made the clean car standards a core component of his climate agenda. He envisioned getting cars to travel an average of 54.5 mpg in test conditions.

Under Trump, EPA and the National Highway Traffic Safety Administration are proposing to freeze fuel economy requirements through 2026, allowing cars to travel an average of just 37 mpg.

In addition, the two agencies are proposing to withdraw California’s Clean Air Act waiver for greenhouse gases, which lets the state set tougher tailpipe pollution limits than the federal government.

EPA and NHTSA didn’t respond to requests for comment for this story, including questions about when the final rule will be released.