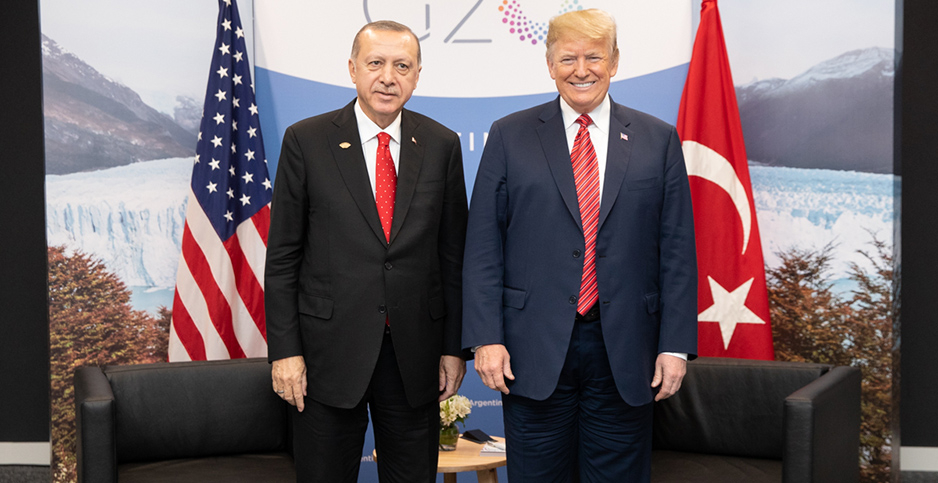 President Trump participated in a bilateral meeting with President Recep Tayyip Erdogan of Turkey at the Group of 20 summit in Argentina. White House/Sipa USA/Newscom

The White House is insisting that some of the world’s top polluters are reconsidering signing on to the Paris climate agreement.

During a briefing at the Group of 20 summit in Buenos Aires, Argentina, this past weekend, a senior Trump administration official told reporters that the last issue to close at the meeting was a climate provision. That is because a few countries were "second-guessing" the language around climate change, the official said.

"The countries who typically might agree couldn’t agree with each other," the official said. "And what you’re starting to see is you’re seeing a little bit of the coalition fraying. Countries like Turkey, like Saudi Arabia, like Russia, might be second-guessing some of that."

Other countries isolated the Trump administration at the G-20 summit because of its stance on Paris and climate change. In the end, the United States was the only country to not sign on to language in a communiqué reaffirming support for the Paris Agreement.

The statement reads: "We will continue to tackle climate change while promoting sustainable development and economic growth" (Climatewire, Dec. 3).

France and China insisted on including the language, though the Trump administration suggested that Paris was a sticking point for other countries behind closed doors.

After reporters pressed the White House on what that might mean for the Paris Agreement, the Trump administration official suggested that it was because those countries were waffling on whether or not they would stay committed to the agreement.

"I think our message was resonating in the room, because that was the last issue to close, and there were other countries who are thinking long and hard about whether they still wanted to remain committed to that paradigm," the official said.

But those involved in past negotiations, including on behalf of the Trump administration, doubted that any of the G-20 nations were seriously considering an exit from Paris. A White House spokeswoman did not respond to a request for comment.

Andrew Light, a former State Department climate negotiator now at the World Resources Institute, said it’s unlikely that the administration was actively urging other countries to follow it out of the Paris Agreement. And it’s equally unlikely, he said, that they would think it was in their best interests to do so.

"No other countries have a motivation to leave like the U.S. does, which is purely ideological and not based on any real consideration of what Paris does or what a country’s obligations are under Paris," he said. "At the end of the day, there is no upside for any country right now to side with the U.S. on this stuff."

The United States is poised to join North Korea as the only two countries outside the Paris Agreement. Commitments to the 2015 deal are nonbinding, and negotiations that kicked off yesterday in the Polish coal-mining city of Katowice will determine, among other things, whether countries’ progress toward them will be subject to expert and peer review. Watchdog groups that track the process warn that numerous countries are currently not on track to meet their initial Paris targets.

Turkey did, in fact, hold up the start of the talks in Poland on Monday — but it was over the long-standing problem of its designation as an Annex 1, or wealthy, country. Through a quirk of history involving Turkey’s place in the Cold War, the nation was classified as both a wealthy and non-wealthy country under the U.N. Framework Convention on Climate Change, the 1992 treaty that established the climate process. That has proved to be a barrier to the country’s ability to access climate finance, and it has been struggling to shake the Annex I designation since the 1990s. Consultations are scheduled on the sidelines of the Poland talks.

Saudi Arabia has spent the same decades honing its influence within the UNFCCC process (Climatewire, Oct. 29). Russian President Vladimir Putin signed the Paris Agreement but had a breezy take in the immediate aftermath of Trump’s June 2017 choice to back out.

The Trump administration would burn a lot of political capital if it tried to encourage other countries to drop out of the Paris Agreement, said George David Banks, a former Trump White House official who focused on international energy policy.

He said that Russia has even less interest in climate science than the Trump administration, particularly because the country would gain economic wealth in a warmer world, but that it doesn’t want to leave the bargaining table.

The same goes for Saudi Arabia, which doesn’t agree with aggressive goals to curb emissions but is not willing to sideline itself from negotiations by joining the United States in exiting the deal.

"The Saudis are not going to back out of the Paris Agreement. The first and foremost reason is that they know if they are going to preserve their market for oil and gas — however it develops, it’s going to develop alongside the climate agenda — they know they can’t somehow kill the international climate agenda," Banks said. "You can’t shape it if you’re not part of it."