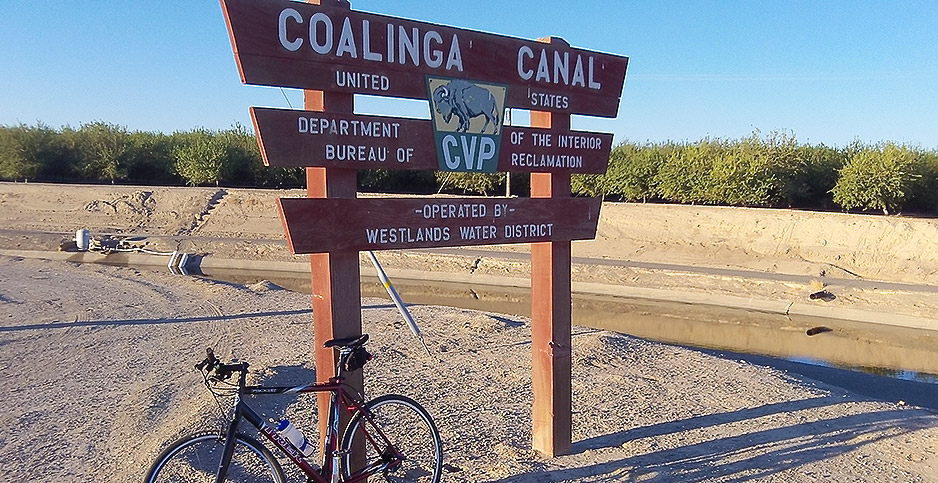 A sign marks the Coalinga Canal in California's Central Valley. An almond orchard can be seen in the background. Hasso Hering/hh-today.com

The Trump administration is urging a federal court to reject a multimillion-dollar claim over water rights from California farmers, in the latest round of a politically sensitive and long-running lawsuit.

At issue is a decadeslong case from major farmers claiming that the Bureau of Reclamation has failed to build a drainage system in the San Joaquin Valley’s Westlands Water District.

Farmers in the district claim that the lack of drainage system has amounted to an unconstitutional taking of their property without compensation under the Fifth Amendment because it has reduced their crop yields.

The U.S. Court of Federal Claims put the case on hold in 2013 while the bureau and Westlands worked on a deal, which would have needed congressional approval. But the case was revived this summer at the farmers’ request. Reclamation’s solution has yet to be ratified by Congress, and there is little to suggest it will be anytime soon (Greenwire, July 21).

In its recent filing, however, the Trump administration accuses the farmers of engaging in "linguistic obfuscation" to try to recharacterize what Reclamation has — and hasn’t — done.

The government argues that the court cannot find that Reclamation took any of the farmers’ property by not doing anything — or "inaction." A illegal taking, they claim, must stem from a concrete action taken by the government.

"At bottom," the government wrote, "Plaintiffs allege both in their original complaint and in their amended complaint that Reclamation’s failure to provide drainage has negatively impacted their farmland."

The farmers, the government writes, are attempting misdirection by relabeling "inaction" as a "deliberate, affirmative and authorized choice" not to provide a drainage system.

Justice Department lawyers also contend that Reclamation has not committed a taking because it has not been authorized by Congress to provide a drainage system.

Providing drainage to the Rhode Island-sized Westlands Water District, an agricultural powerhouse, has vexed Reclamation and its farmers for decades.

Westlands gets its water from the Reclamation’s Central Valley Project, which shuttles water from California’s wet north to its drier south via canals, dams and aqueducts.

Underneath Westlands lies a dense clay layer that prevents irrigation water from draining and causes contaminants like selenium to accumulate. Eventually, that ruins the soil for farming.

Since Reclamation built the San Luis Unit of the Central Valley Project, which serves Westlands, it has known it would need to provide drainage. It originally proposed a 188-mile drain, but only 80 miles were ever constructed, and those fed the contaminated water to Kesterson Reservoir, poisoning the area’s waterfowl.

Courts have ruled that Reclamation must provide drainage. After years of negotiations, Reclamation and Westlands reached a settlement near the end of the Obama administration in 2015 that said Westlands would build the draining system, but the district’s remaining debt for construction of the Central Valley Project would be forgiven — about $250 million at the time. Westlands would also retire at least 100,000 acres of cropland under the deal.

Congress was required to approve the agreement, however, and it hasn’t.

Former Rep. David Valadao (R-Calif.), who represented the area, introduced legislation to authorize the deal, but it ran into stiff opposition from Democrats who said it was too good a deal for Westlands.

Valadao is currently running for his former seat again in a rematch with Democratic Rep. TJ Cox.