Trump admin forges ahead on plan to strengthen truck rules 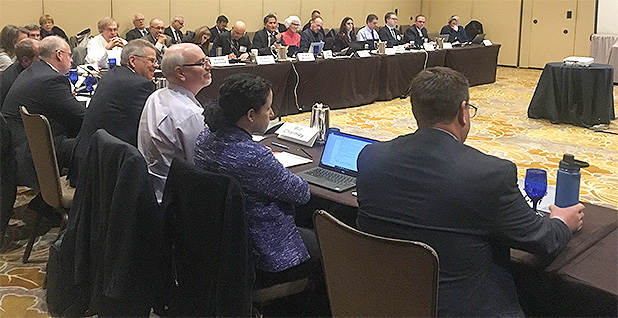 "It’s a big project. We have a very ambitious schedule. Our goal is to propose new regulations in 2020," Chris Grundler, director of EPA’s Office of Transportation and Air Quality, said during an EPA mobile sources technical review subcommittee meeting in Arlington, Va.

"The Clean Air Act says the administrator shall set standards for this sector and from time to time shall revise them," Grundler said. "And it has been 18 years, so we thought, ‘It’s time.’ And certainly we had heard in 2015 and 2016 from state and local air agencies petitioning EPA to take action."

Steve Cliff, deputy executive officer at the California Air Resources Board, attended today’s meeting. In an interview, he rejected this theory.

"We’ll be moving forward probably on a faster time scale than the EPA will be," he added. "I think [Grundler] said they’re hoping to propose in 2020. We’ll be taking our regulation to our board in the first quarter of 2020. So that’s probably somewhat ahead."

"E&E is sitting behind me, so I’m going to choose my words carefully," Grundler quipped in response to a question about the rollback.

"Let me tell you what EPA is doing, because I don’t know what NHTSA is doing," he continued. "What EPA is doing … is a detailed evaluation and analysis of what the NHTSA team has done. We are in the middle of that, so we are briefing our leadership on our technical reviews."

"I don’t know when the final rulemaking is going to be done. As you know, we lost nearly five weeks," he said. "That didn’t help. And there’s an extensive list of comments that the government’s going to have to respond to. So that’s what I can tell you."

Wheeler acknowledged last month that the rollback had been "delayed a little" to late spring or early summer (Greenwire, March 12). In a brief interview, Grundler called Wheeler’s timeline "ambitious" but said it was achievable.

Grundler was seated this morning next to Bill Charmley, a career staffer and director of the Assessment and Standards Division in EPA’s Office of Transportation and Air Quality.

Charmley made waves last year by writing an internal memo that raised serious concerns about NHTSA’s proposed justification for the rollback. NHTSA is arguing that the rollback will increase safety on the nation’s roads by encouraging people to purchase newer, safer cars and ditch older models.

Charmley today gave a noncontroversial presentation on the EPA transportation office’s rulemaking activities. He said the office is "not actively working on" an endangerment finding for greenhouse gas emissions from airplanes, despite interest in the idea.