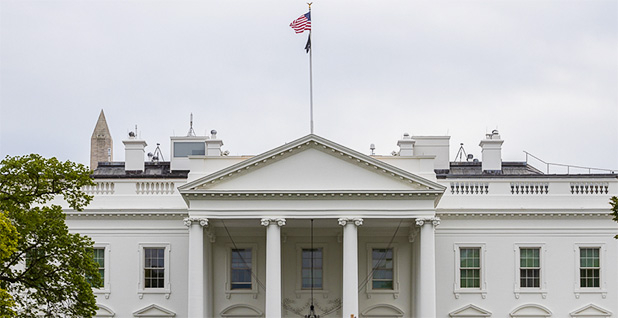 The White House and federal agencies are said to be continuing work on next fiscal year's budget and regulatory agenda. Francis Chung/E&E News

EPA is continuing to prepare its budget plan for the next fiscal year — another sign of defiance from the Trump administration over the election results.

Mandy Gunasekara, the agency’s chief of staff, confirmed via text message this morning that the agency has continued to march ahead with the budget proposal while the president and his top allies allege ballot corruption.

"Just a daily reminder, it’s not over," Gunasekara tweeted, with an American flag emoji and a screenshot from the website RealClearPolitics showing the Biden-Harris ticket with just 259 electoral votes — 11 shy of those needed to win. Other media outlets have Biden-Harris as the clear winners.

Similarly, an Interior spokesperson said the department is "engaging in routine annual interactions with the staff at [the Office of Management and Budget] on the budget process, in the same way that we do every year."

Recent reporting in The Washington Post indicated that the White House has directed agencies to continue to prepare budget materials that are usually released in February.

David Coursen, a former EPA staffer, noted that the Trump White House has already prepared four EPA budgets, which all looked very similar, so "it wouldn’t take a lot of effort to gin up another one."

Robert Shea, who served on the George W. Bush transition, noted that if the Office of Management and Budget is developing a full-scale spending plan "in light of the irrefutable evidence that it won’t ever be submitted is an irresponsible use of taxpayer resources."

Traditionally, he explained, during a transition, OMB produces a "current services budget, which is a considerably lighter lift."

"And they do that knowing the team will be repositioned to focus on the new team’s priorities, with a ‘skinny budget’ submitted early in the term (Feb/Mar) followed by a more fulsome budget some time later," he wrote.

OMB did not respond to a request for comment by deadline.

It is possible the agency is preparing the semiannual regulatory agenda, which is generally issued every spring and fall.

Susan Dudley, who was the Office of Information and Regulatory Affairs administrator in the George W. Bush era, noted that the rules outlined in Executive Order 12866 require the office to issue what is known as the Unified Agenda, though some have been missed in the past.

In 2016, the Obama White House issued a fall regulatory agenda even after it was clear Trump had won the election. Four years prior, though, the Obama administration skipped the spring 2012 Unified Agenda amid pressure from Republicans.