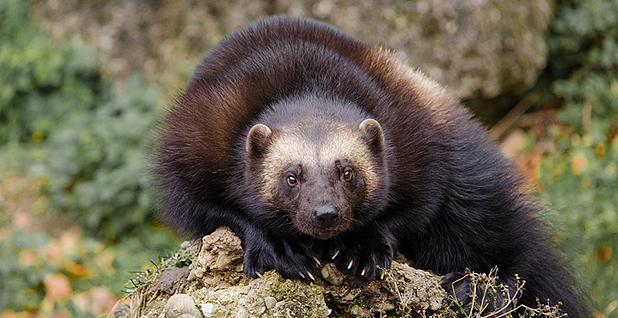 The North American wolverine could end up classified as threatened under the Endangered Species Act. The Trump administration announced new rules today for implementing the statute. Pixbay

The new rules will apply only to future listing decisions. Plants and animals with existing protections won’t be affected unless their status changes.

"The best way to uphold the Endangered Species Act is to do everything we can to ensure it remains effective in achieving its ultimate goal — recovery of our rarest species. The Act’s effectiveness rests on clear, consistent and efficient implementation," Interior Secretary David Bernhardt said in a statement.

"An effectively administered Act ensures more resources can go where they will do the most good: on-the-ground conservation," he said.

Environmentalists promised to challenge the changes in court, and Democrats vowed to attack them on Capitol Hill.

The rules track with the administration’s draft regulations in making the biggest change in a generation to a broad swath of the federal conservation regime.

Some of the regulations’ biggest impacts deal with the difference between threatened and endangered species.

Wildlife is deemed threatened when it’s at risk of becoming endangered in the "foreseeable future." The administration wants to consider only future factors that it deems "likely," not just possible.

The draft regulations would have also allowed the government to disregard some data from computer models; it’s not clear whether the final rule keeps that provision.

"We’ll look out in the future only so far as we can reliably predict and not speculate," said Gary Frazer, the Fish and Wildlife Service’s assistant director for ecological services.

There’s no exact time frame the government will follow, he said, adding that the new standard will codify the Interior Department solicitor’s opinion that the government currently relies on.

"It’ll only go so far as we can reasonably determine that the threats — so this might be climate-induced changes in the physical environment — and the species’ responses to those threats are likely. That we’re not speculating about those," Frazer said.

Threatened and endangered species have enjoyed some identical protections since 1978, when FWS used its flexible authority to automatically grant threatened species the same safeguards as endangered ones from harm or disturbance. That’s known as the "blanket 4(d) rule."

The administration is ending that. FWS will now have to craft individual regulations for each threatened species.

The regulations call for greater emphasis on economic impact analysis, even as environmental groups note the law forbids anything except science from influencing a listing decision.

The regulations allow the government to present economic impacts alongside a listing decision. To stay within the law, separate teams would work in parallel on the listing decision and the economic analysis, officials said.

The rules also change the way officials designate critical habitat for a species’ recovery. Officials would have to consider protecting areas already occupied by the species before considering unoccupied habitat. Those decisions had been made in tandem in the past.

Republicans, who have long struggled to push ESA changes through Congress, cheered the new regulations while urging even more action.

"Under the previous administration, the Endangered Species Act strayed woefully far from its original intent. The Act was morphed into a political weapon instead of a tool to protect wildlife. Secretary Bernhardt’s dogged dedication to righting this wrong is again made apparent today," Rep. Rob Bishop of Utah, the House Natural Resources Committee’s top Republican, said in a statement.

"These final revisions are aimed at enhancing interagency cooperation, clarifying standards, and removing inappropriate one-size-fits-all practices," he said. "I look forward to supporting efforts in Congress to enshrine these revisions into law."

Some Senate Republicans struck an even more forceful tone.

"These final rules are a good start, but the administration is limited by an existing law that needs to be updated. I am working in the Senate to strengthen the law, so it can meet its full conservation potential," Senate Environment and Public Works Chairman John Barrasso (R-Wyo.) said in a statement.

Environmentalists were promising legal action even as they combed through the regulations’ specifics.

"For animals like wolverines and monarch butterflies, this could be the beginning of the end. We’ll fight the Trump administration in court to block this rewrite, which only serves the oil industry and other polluters who see endangered species as pesky inconveniences."

Others pointed to the waves of die-offs happening around the world, which some scientists have called a mass extinction.

"The impacts of this action are bad enough on their own — but the decision also signals continued willful ignorance from the Trump administration about the looming impacts climate change will have on the American landscape," said Rebecca Riley, legal director for the nature program at the Natural Resources Defense Council.

"Many parts of the Endangered Species Act could be helpful in taking a more forward-looking perspective on climate impacts to wildlife, but that seems like an impossibility from this president," Riley said.

Arizona Rep. Raúl Grijalva, the Democratic chairman of the Natural Resources Committee, said these changes will only worsen the ongoing "mass extinction." Grijalva suggested he would use his panel to probe the changes.

"These rollbacks of the ESA are for one purpose only: more handouts to special interests that don’t want to play by the rules and only want to line their pockets. This action by the Trump administration adds to their ongoing efforts to clear the way for oil and gas development without any regard for the destruction of wildlife and their habitats," said Grijalva.

"I have serious questions on whether inappropriate political influence was exerted over decisions that should be based on the best scientific information," he said.

Sen. Tom Udall (D-N.M.), ranking member of the spending subcommittee with jurisdiction over Interior, said Democrats would look for tools to undo the administration’s action, including possible use of the Congressional Review Act.