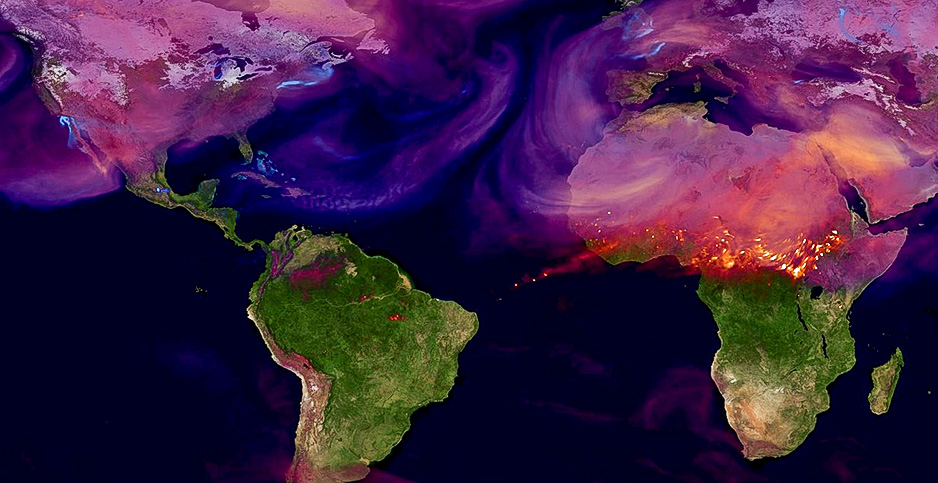 The last time carbon dioxide levels hit the mark the Trump administration envisions for the end of the century, crocodiles roamed the poles and palm trees existed where glaciers are today. In fact, there were no glaciers — not even in Antarctica.

Although the White House has avoided addressing climate change, it made a rare acknowledgement that its proposal to weaken vehicle fuel efficiency standards would contribute to a warmer planet. Its prediction for what the atmosphere will look like in 2100 startled climate scientists — a carbon dioxide concentration of 789.76 parts per million. That’s nearly double current levels.

Scientists said reaching that mark would be devastating for the planet. Although humans would survive, much of that would depend on the ability to adapt to new conditions. Food and water scarcity would result from changing precipitation patterns and higher temperatures. Potentially billions of people would struggle. Some species and ecosystems would collapse.

"By mid Century, food and especially water shortages will likely become so widespread that regional conflicts and environmental refugees will dwarf anything we see now, and hence it is not really livable for all humans," Kevin Trenberth, a climate scientist at the National Center for Atmospheric Research, said in an email. "So the last time 800 ppm occurred is not really pertinent because there were not 10 billion people present."

The administration’s chart attempts to prove that there will be little noticeable effect on global temperatures as a result of its plan, triggering "3/1,000ths of a degree Celsius increase in global average temperatures by 2100." It says that the estimated atmospheric CO2 under the Trump plan would be 789.76 ppm, compared with 789.11 ppm under the Obama plan. The agencies said its proposal would increase oil consumption by 500,000 barrels per day.

The Trump administration does not acknowledge the significant impact of a world where emissions would rise to such an extreme level, one that would be far hotter, with dramatic sea-level rise and an increase in droughts and deadly heat waves.

The number used by the Trump administration assumes that fossil fuel consumption will continue to rise every year, said Ralph Keeling, head of the CO2 program at the University of California, San Diego’s Scripps Institution of Oceanography. It does not account for competition from renewable energy, emissions reduction policies or the assumption that the market can support that rate of growth, he said. It also doesn’t account for a significant global effort to curb emissions, such as the Paris climate agreement.

"That 700 range is accessible, but only if we continue to have a few-percent-per-year growth in emissions, all the way through to 2100," he said. "It’s more than a doubling of emissions, so it’s assuming that the world is going to be burning more than twice as much fossil fuel in 80 years than it is burning now, so not only are we not cutting emissions, we’re just continuing to grow them."

Keeling said the current level of atmospheric carbon dioxide is likely equivalent to that of about 3 million or 4 million years ago. The number used by the Trump administration would put the planet at the same level of carbon dioxide it experienced during the Eocene Epoch, he said. In the early Eocene, when carbon dioxide levels topped 1,000 parts per million, there were crocodiles swimming in the Arctic.

The concentration of atmospheric CO2 has risen more than 35 percent since before the Industrial Revolution, when it was estimated to be 280 ppm, according to Scripps. When scientists first started recording CO2 about 60 years ago, it was 320 ppm. This year, that number hit 410.31, a record high in modern history and a sharp increase since 2013, when CO2 levels surpassed 400 ppm for the first time, according to Scripps.

Scientists said it’s the rates of change, rather than the absolute value of carbon dioxide in the atmosphere, that will matter most.

"In my view, the human species will be just fine," Daniel Schrag, director of Harvard University’s Center for the Environment, said in an email. "But many individual humans (perhaps billions of individuals) will suffer terribly."

EPA and the National Highway Traffic Safety Administration said its proposal to freeze vehicle fuel efficiency standards at 2020 levels, rather than keep tightening targets through 2026, would raise carbon dioxide concentrations 0.65 ppm relative to the Obama administration levels in 2100.

"EPA and NHTSA welcome comments on all aspects of the environmental analysis," NHTSA said in a statement.

Schrag and other scientists said the Trump administration’s projection reflects a business-as-usual scenario. Those atmospheric concentrations would most closely resemble the Eocene Epoch, Schrag said, about 40 million to 45 million years ago, though not when the Eocene was at peak warmth.

Kate Marvel, a physicist at Columbia University and a researcher at the Goddard Institute for Space Studies, said the administration’s estimate would align with levels not seen in 50 million to 55 million years. She called it "horrifying," noting that it could result in a meter of sea-level rise.

Michael Oppenheimer, a Princeton University climate expert, said it is "highly doubtful" that humans "would thrive in such a world, reached in a mere century."

The atmospheric carbon dioxide number selected by the Trump administration is one of the most pessimistic scenarios outlined in the Intergovernmental Panel on Climate Change report. It also does not account for the world’s other major polluters fulfilling their emissions goals under the Paris climate agreement, from which Trump has pledged to withdraw.

The rollback of the vehicle efficiency rules is one of Trump’s most consequential actions on climate, observers have said. Schrag said the administration’s proposal shows that it is not fully considering the implications of its actions.

"I think it is pretty clear that they care only about immediate impact on existing businesses that they are close to," Schrag said. "If you don’t care about the long-term future, then climate change is not as much of a worry."