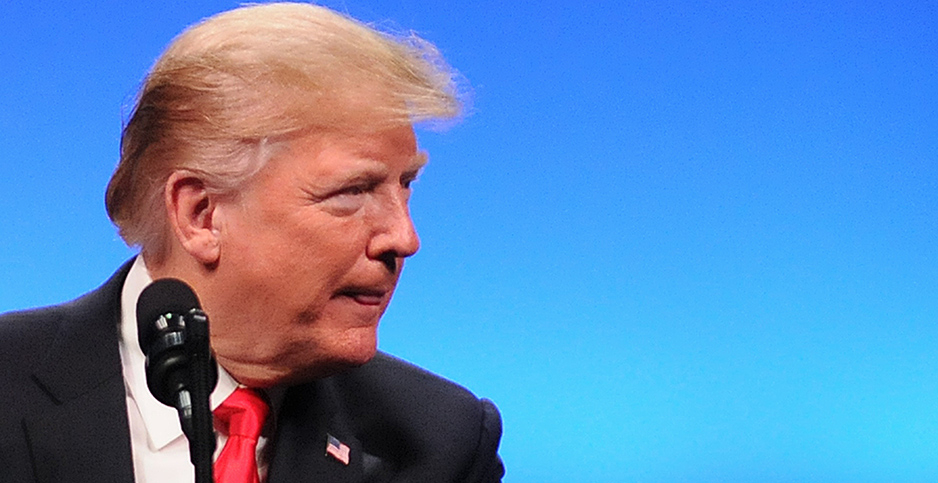 President Trump last night addressed attendees of the International Association of Chiefs of Police annual conference in Orlando, Fla. He has not mentioned a U.N. report released over the weekend that issued a dire warning on climate change. Paul Hennessy/NurPhoto/Sipa USA/Newscom

The White House responded to a dire climate report released this weekend with an oft-repeated talking point: The nation’s emissions have dropped since 2005.

Underlying that statistic, however, is a historic shift away from coal-fired electricity in the United States as utilities embrace renewables and natural gas.

That’s a trend the Trump administration has signaled it may slow.

At issue is a report the U.N. Intergovernmental Panel on Climate Change, a consortium of experts from 40 countries, issued over the weekend outlining a dire warning about the fate of the planet if emissions aren’t curbed in the next decade (Greenwire, Oct. 8).

The document, which incorporated findings from 6,000 scientific studies aimed at assessing the difference between a 1.5 degree Celsius increase and a 2 degree increase, calls on global leaders to hold warming to no more than 1.5 degrees above preindustrial levels or abandon billions of people to the social and natural dangers of runaway warming (Climatewire, Oct. 9).

President Trump, who has called climate change a hoax invented by China, has so far made no mention of the report, opting instead to tweet about newly confirmed Supreme Court Justice Brett Kavanaugh, "paid D.C. protesters," and upcoming rallies in Iowa and Ohio. News also broke today that Nikki Haley is leaving as the United States’ ambassador to the United Nations (see related story).

When asked about the IPCC report, White House spokeswoman Lindsay Walters issued a statement touting the United States’ leadership in providing affordable, abundant and secure energy while protecting the environment and reducing emissions through job-creating innovation.

"From 2005 to 2017, U.S. CO2-related emissions declined by 14 percent while global energy-related CO2 emissions rose by 21 percent during the same time," she wrote. "This has been possible through the development and large-scale deployment of new, affordable, and cleaner technologies to capitalize on our energy abundance."

That response has been echoed in recent months by various Trump administration officials, including acting EPA chief Andrew Wheeler, who at a recent meeting presented a slideshow of graphs showing reductions in air pollution over time.

One slide in Wheeler’s presentation included a data point showing total U.S. energy-related carbon dioxide emissions fell by 14 percent between 2005 and 2017 while global energy-related emissions increased by more than 20 percent during the same period (Greenwire, Oct. 2).

Those data stem from the Energy Information Administration’s findings in September that energy-related CO2 emissions have declined in seven of the past 10 years and are now 14 percent lower than in 2005.

EIA pinned that drop on a shift away from coal in the energy sector to lower emission and more efficient natural gas and renewables, all while electricity sales have dropped across the country as milder weather — cooler summers and warmer winters — settled in, according to EIA.

Critics say the response is underwhelming and hypocritical.

Paul Bledsoe, an energy fellow at the Progressive Policy Institute and former White House climate adviser during the Clinton administration, said the talking point of the United States reducing its emissions has been used among various Trump officials.

What’s ironic, he said, is that it proves the nation can cut emissions while boosting the economy.

"The numbers they’re touting demonstrate we can cut emissions cheaply, even as they claim we can’t," he said. "It’s incredibly ironic."

The president in recent months has slammed wind power as a subsidy-dependent "killing field" for birds, all while rolling back a slew of regulations to boost the coal sector. The administration is also reportedly working on a policy that would boost nuclear and coal plants in the name of national security.

But Frank Maisano, a principal at Bracewell LLP, said the White House made a good point and that emissions have indeed dropped because markets are changing and the nation’s policies are allowing it.

Maisano said innovations are driving new ways of using energy, and utilities will continue using coal where pollution controls are installed and switch to gas where it makes sense. What’s not needed, he said, are regulations or mandates like the Paris accord.

"We can reduce emissions to a certain extent, but it’s not because of imposing regulations or mandates," Maisano said. "That handicaps what we can do, that’s what the Clean Power Plan did."

"The Paris Agreement is incredibly flexible, but let’s face it, China pledged to peak its emissions around 2030," said Banks. "So when the administration responds by saying emissions have fallen by X percent since 2005, you can argue the United States is certainly playing an important role in climate mitigation. I think you can question whether or not we’re playing enough of a role."

It’s not clear when or if Trump will ever address the report. According to press pool reports, Trump is slated to meet with Kanye West on Thursday to discuss prison reform, manufacturing and gang violence, before flying to a rally in Ohio on Friday.

Responses have also been percolating from other corners of the government.

The State Department on Saturday released a statement saying it appreciates the "hard work of the scientists and experts who authored the IPCC Special Report on Global Warming of 1.5C under considerable time pressure" and the agency’s engagement with other members of the panel to finalize the special report by accepting the report from its authors and approving its Summary for Policymakers.

But the State Department also distanced itself from the scientific findings of the IPCC and questioned some of the model results, noting that sections of the report tied to the impacts of 1.5 degrees of warming are "more limited than many other aspects of the climate issue" and that much of the literature is "quite recent" (Climatewire, Oct. 9).

"With respect to acceptance of the Special Report, as provided in the IPCC’s procedures, the contents of the authored chapters have not been subject to line-by-line discussion and agreement, and remain the responsibility of the authors," the department wrote. "In this context, the United States notes that acceptance of this report by the Panel does not imply endorsement by the United States of the specific findings or underlying contents of the report."

The State Department also doubled down on the Trump administration’s intent to leave the Paris accord as soon as possible.

"Finally, in light of references to the Paris Agreement in the Summary for Policy Makers, we reiterate that the United States intends to withdraw from the Paris Agreement at the earliest opportunity absent the identification of terms that are better for the American people," they wrote.