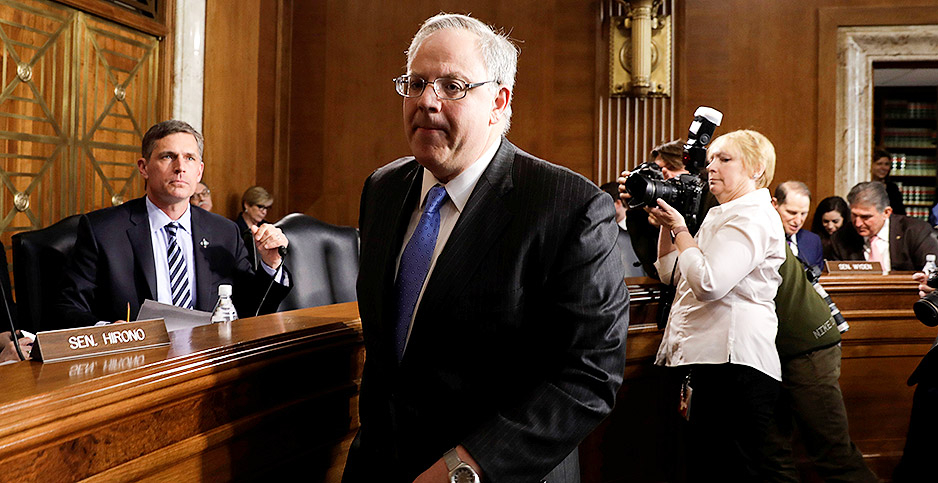 The Trump administration is ordering a sweeping environmental review of the burgeoning offshore wind industry, a move that threatens to derail the nation’s first major project and raises a host of questions for future developments.

The Bureau of Ocean Energy Management, a division of the Interior Department, is ordering a study of the cumulative impact of a string of projects along the East Coast. The review comes in response to concerns from fishermen about the impact of offshore wind development on East Coast fisheries.

A BOEM spokeswoman said the review would focus on projects with signed power purchase agreements. Nine projects in seven states with a combined capacity of 4.8 gigawatts are planned to come online in the coming years. The study will also consider the environmental implications of an even larger build-out of the industry, based on states’ development targets for offshore wind.

The study will supplement an environmental impact statement of Vineyard Wind LLC, the country’s first major offshore project. The 84-turbine project would be located in federal waters 15 miles south of Martha’s Vineyard in Massachusetts and capable of producing 800 megawatts of electricity, enough to supply 3% of New England’s annual energy needs.

"Because BOEM has determined that a greater build out of offshore wind capacity is reasonably foreseeable than was analyzed in the initial draft EIS [environmental impact statement], BOEM has decided to supplement the Draft EIS and solicit comments on its revised cumulative impacts analysis," said Tracey Moriarty, a spokeswoman for the bureau.

The question facing the industry is whether the review represents a genuine attempt to understand the environmental impacts associated with offshore wind or an effort to kill it, said Anthony Logan, an analyst who tracks the industry at Wood Mackenzie, a consulting firm.

"If they are doing this because they want a stable template for the enormous amount of wind projects that are certainly following, then this is arguably a good development," Logan said. "However, you can make up reasons for lots of things. This administration thus far has been very professional when it comes to offshore wind. But the president himself has been very publicly critical of all this."

The analysis throws Vineyard Wind’s future into doubt. The developer, a partnership of Avangrid Inc. and Copenhagen Infrastructure Partners, warned it would be difficult to proceed if BOEM delayed its environmental analysis beyond the summer. But Vineyard Wind officials sought to strike an upbeat tone after BOEM’s supplemental EIS was announced Friday.

They called the decision "a surprise and disappointment" but insisted the project "remains viable and continues to move forward" (E&E News PM, Aug. 9).

Vineyard Wind’s problems are several, according to industry analysts and those familiar with the project (Climatewire, Aug. 7). First and foremost is the availability of the investment tax credit, a federal subsidy available to wind projects. The project had anticipated taking a 24% tax credit on $2.8 billion in capital costs. That enabled the company to sign a contract with three Massachusetts utilities at a price far lower than what analysts had initially expected.

But the tax credit expires at the end of the year. While the project could still qualify for an exemption because of the permitting challenges it has faced, the logistics associated with building America’s first major offshore project makes that more complicated.

Vessels contracted to begin work on Vineyard Wind this fall will not be available again in several months thanks to Europe’s offshore wind construction season, Logan said. Vineyard Wind is likely looking at a year delay before it can get boats back to the United States, he said.

Vineyard Wind has already gone through a lengthy permitting process. BOEM conducted an initial environmental review when it made the decision to lease parcels of the ocean for wind development in federal waters south of Massachusetts and Rhode Island.

It is not clear when the bureau will finish its project-specific review. Vineyard Wind had benefited from a 2017 executive order, in which President Trump directed federal agencies to complete environmental reviews for major infrastructure projects within two years. Under that schedule, Vineyard Wind’s review would have been completed by March 2020, Moriarty said.

The Trump administration had committed to completing its review of the project by the March 2020 deadline and was originally expected to release its final report this summer. But the schedule was thrown off after NOAA Fisheries said it could not concur with the draft analysis conducted by BOEM, prompting a heated debate between the agencies (E&E News PM, July 29).

"We are focusing on the supplemental EIS, and not yet prepared to set a schedule for the Final EIS," said BOEM’s Moriarty.

The change in timeline drew fierce criticism in Massachusetts, where state officials have been counting on Vineyard Wind to drive investment and jobs in the port of New Bedford. Offshore wind also represents the centerpiece of the Bay State’s plans to reduce carbon emissions.

Massachusetts Attorney General Maura Healey (D) said her office "is reviewing all of our available options to ensure this project moves forward."

Gov. Charlie Baker, a Republican, personally lobbied Interior Secretary David Bernhardt to advance the project. A spokesman for the governor called the delay "a step in the wrong direction" but said Baker "remains committed to advancing Massachusetts as a national leader in developing offshore wind energy and will continue to work with federal regulators."

Rep. Bill Keating, a Democrat who represents New Bedford and Cape Cod, was even more strident in his criticism, saying the announcement was part of a wider trend of the Trump administration supporting fossil fuels at the expense of renewables.

"The effects of today’s announcement are the potential loss of over three thousand jobs in our region; the loss of the ability to heat 400,000 homes; and — in light of the decommissioning of Pilgrim Power Plant — twenty percent of our energy was anticipated to come from off-shore wind by 2035," Keating said in a statement. "All of this is in jeopardy now."

The impact for the rest of the industry is less clear. On the one hand, the projects that follow Vineyard Wind are not as dependent on the ITC, meaning they face less of a time crunch. A spokesperson for the New York State Energy Research and Development Authority said officials there were monitoring the situation closely but that they did not anticipate the development delaying any projects there.

But conflicts with fishermen are only likely to grow. Vineyard Wind has primarily drawn opposition from squid fishermen. An area likely to be offered for lease next year near New York is prime scalloping water. Fishermen there are already raising objections.

If Vineyard Wind is ultimately found to have a detrimental impact on fisheries, that would have serious consequences for the rest of the industry, said Logan, the Wood Mackenzie analyst.

"It would be an exteremly bad precedent to set," he said. "Based on the things they’ve brought up with fisheries, which is a problem up and down the Eastern Seaboard, it could be contagious, so to speak."