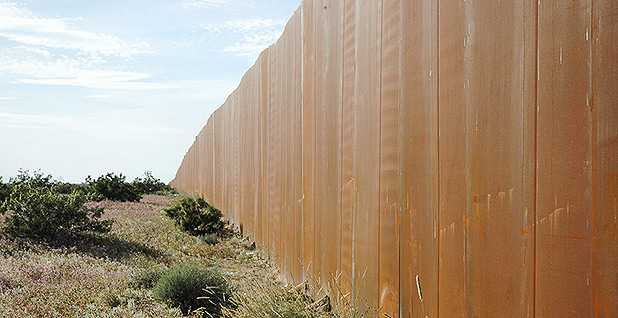 The Department of Homeland Security waived environmental laws for building a wall along the U.S.-Mexico border in the San Diego area. An existing section of the wall is shown here from the Sonoran Desert in Mexico. Wonderlane/Flickr

The Trump administration waived environmental and other regulatory requirements today to expedite construction of barriers along the border between California and Mexico.

The Department of Homeland Security said the waiver covers a "variety of environmental, natural resource and management laws" along the border near San Diego.

It marks one of the first steps in the administration’s bid to construct a border wall along the U.S.-Mexico border, a pillar of President Trump’s campaign last year. The president issued an executive order on the issue days after entering office.

The waiver will apply to border infrastructure projects near the U.S. Border Patrol’s San Diego sector. The administration says it is "one of the busiest sectors in the nation," where "more than 31,000 illegal aliens" were detailed in the 2016 fiscal year. DHS also said 9,167 pounds of marijuana and 1,317 pounds of cocaine were seized in the area during that time.

DHS will focus primarily on a 15-mile segment of the border that begins in the Pacific Ocean.

The agency said it has authority to issue such a waiver under the Illegal Immigration Reform and Immigrant Responsibility Act of 1996 and subsequent amendments to that law.

It will be officially published in the Federal Register tomorrow, according to a DHS spokesman.

It remains unclear how large portions of the wall would be funded and how feasible construction would be.

Trump’s border wall pledge remains a contentious issue, including the environmental ramifications of such a barrier.

The Center for Biological Diversity has already challenged the San Diego project in federal court. The case is pending.

Brian Segee, an attorney with CBD, sharply criticized the waiver today, contending that it is "inapplicable and unconstitutional."

"Trump wants to scare people into letting him ignore the law and endanger wildlife and people," Segee said in an email. "This isn’t just a wall they’re in a rush to build. It’s roads, lighting and all of the infrastructure that comes with it. All of this without any environmental review or public input. It’s a travesty that must be stopped."