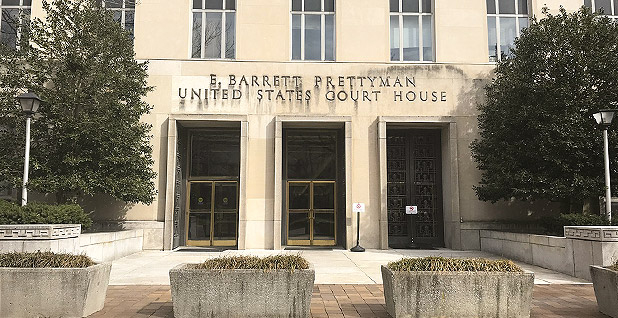 An anticipated flood of lawsuits from environmental groups and states will soon put those claims to the test.

Potential challengers of EPA’s Affordable Clean Energy rule — which does not set a limit on emissions and asks states to select from a list of facility-level efficiency measures — say the regulation flouts the agency’s responsibilities under the Clean Air Act and the Administrative Procedure Act (Greenwire, June 19).

"The Trump administration is doing everything it can to eviscerate protections for the public," said Sierra Club attorney Joanne Spalding. "EPA in particular has issued rule after rule rolling back public health protections, and it has so far been unsuccessful.

"We expect this rule to see the same fate."

One industry lawyer said challengers of the ACE rule are likely to face an "uphill battle" in court.

"Even the Obama EPA acknowledged that the Clean Power Plan relied on a new and pretty creative interpretation of the statute and in particular of what constituted the ‘best system of emissions reduction,’ or BSER," said Bracewell LLP partner Jeff Holmstead, who served in the George W. Bush administration’s EPA.

"What the Trump administration has done is they’ve simply gone back to the interpretation that EPA has had since the early 1970s."

Green groups and states yesterday said they are already building their cases and will soon file petitions for review in the U.S. Court of Appeals for the District of Columbia Circuit.

"I’m guessing that the challengers to this rule will frame their case in a way that really forces the EPA to grapple with the fact that, as recently as 2015, the agency came up with a very different interpretation of the best system of emission reduction and that it was backed up with a reality-based record," said Joe Goffman, former counsel for EPA’s Office of Air and Radiation and the current head of Harvard Law School’s environment and energy law program.

"I think the challengers will really make EPA and [the Department of Justice] work hard to persuade the court to ignore all that."

Democratic state attorneys general including Letitia James in New York and Xavier Becerra in California are expected to launch their legal challenges in the coming weeks.

In a comment on EPA’s proposed ACE rule, a 19-state coalition spearheaded by James’ predecessor took EPA to task for failing to treat power plants as part of an interconnected grid and for ineffectively curbing greenhouse gas emissions the agency had previously found could endanger public health (Energywire, Nov. 2, 2018).

"Given its clear violation of the Clean Air Act, I intend to sue the EPA over this ‘Dirty Power’ rule and look forward to collaborating with other states and cities in taking action to protect all Americans from the increasingly disastrous impacts of climate change," James said in a statement yesterday.

What will be in the lawsuits?

Both states and green groups are likely to ask the D.C. Circuit to scrutinize EPA’s determination of the "best system of emission reduction" for coal-fired power plants.

The ACE rule constrains BSER to on-site heat rate improvements, which could have the effect of increasing power plant emissions by making the facilities more efficient and therefore able to run longer.

Under the ACE rule, neither carbon capture and sequestration nor fuel switching qualifies as BSER.

Who will sue? Environmental groups and a coalition of states including New York and California will fight the Trump administration in court.

What will they argue? They will allege federal regulators fell short of their duties under the Clean Air Act and Administrative Procedure Act and got it wrong on what qualifies as the "best system of emission reduction" under federal law.

When are challenges expected? Lawsuits may be filed up to 60 days after the final ACE rule appears in the Federal Register.

Where will the lawsuits be filed? The petitions will land in the District of Columbia Circuit.

"With this rule, the EPA is dodging its responsibility," said Richard Revesz, director of the New York University School of Law’s Institute for Policy Integrity. "The agency is required to control greenhouse gas pollution with the ‘best system of emission reduction,’ but this approach is nowhere close, making the rule legally vulnerable."

The courts must decide whether EPA appropriately restricted BSER to measures a utility could take within the fence line of a power plant, said Tom Lorenzen, a partner at the law firm of Crowell & Moring LLP, who represented power industry challengers in the Clean Power Plan litigation.

"The rulemaking does restore the states to their proper role in establishing standards of performance for existing sources under Section 111(d)" of the Clean Air Act, Lorenzen said.

Groups like the Natural Resources Defense Council said their petitions will focus on the Trump administration’s "do-nothing" approach to climate in the ACE rule.

Like other regulations introduced under President Trump, the ACE rule scraps estimates of global climate benefits in favor of a U.S.-only calculation, which opponents say can skew regulatory cost-benefit analyses.

"We’ll soon file a lawsuit that details the many ways Trump’s approach ignores the public’s demand for climate action, violates the Clean Air Act, and cooks the books on the science behind climate change, air pollution, and the true costs and benefits of addressing both," NRDC President Rhea Suh wrote in a blog post yesterday.

What happens to the Clean Power Plan litigation?

While the legal slugfest over the ACE rule plays out, a separate battle over the Clean Power plan lies dormant at the D.C. Circuit.

Launched in 2015, the Clean Power Plan challenge led to a Supreme Court freeze of the Obama-era rule until the D.C. Circuit could reach a resolution.

After Trump took office, EPA asked the appeals court to hold the case in abeyance, allowing the new administration to take a crack at the rule.

Clean Power Plan opponents can now ask the D.C. Circuit to either dismiss the original lawsuit or keep it on hold to preserve their arguments to the Obama rule.

Court watchers say the petitioners may choose the latter option to safeguard their challenge in the event the courts find the Trump administration’s repeal of the Clean Power Plan was unlawful.

Will ACE go to the Supreme Court?

Legal experts say it’s too early to tell whether the Supreme Court might take up the ACE dispute.

Either way, the legal battle over the ACE rule could take some time.

"The regulatory battle over the Obama administration’s Clean Power Plan and the Trump administration’s Affordable Clean Energy rule is destined for months or years of litigation that may achieve final resolution only in the Supreme Court," Dorsey & Whitney LLP attorney Thaddeus Lightfoot, a former DOJ lawyer, said in a statement.

Experts say that timing will matter.

It has been four years since Obama’s EPA ushered in the Clean Power Plan. In that amount of time, backers of the Obama rule say, the U.S. power sector could have been well on its way to reaping the benefits promised in the original regulation.

Supporters of the Trump rule would also benefit from a speedy resolution to the litigation, analysts for ClearView Energy Partners LLC wrote in a note yesterday.

"If the appeals move forward on a normal timeline, the Trump Administration’s appointees would be in place to defend the newly promulgated program," ClearView analysts wrote.

"If there are significant delays to the pace of the appeal, the potential that a differently minded administration (should one be elected in 2020) could mount a less aggressive defense or reconsider the rulemaking (as the EPA under the Trump Administration did) could grow."