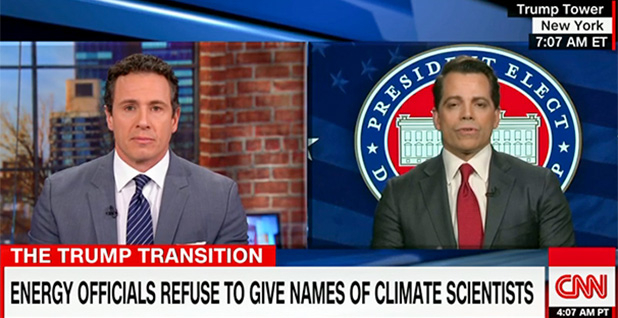 In a CNN interview, Donald Trump's transition team likened modern climate science to the disavowed belief that the Earth was flat. Click here to watch the video.

Fighting the perceived threat to the Obama administration’s massive collection of climate data and resources might require convincing President-elect Donald Trump that gutting information-gathering would disrupt not only the scientific enterprise but also businesses and private-sector entities, advocates say.

Trump’s advisers continue to distance the next administration from climate science, while promising to pursue environmental policies that will reduce pollution.

Scientists once agreed "that the Earth was flat" and "we were the center of the world," said Anthony Scaramucci, a member of Trump’s transition team executive committee in response to questions yesterday about whether man’s actions have an impact on climate.

"Look, I know that the current president believes that the human beings are affecting the climate — there are scientists that believe that that’s not happening," Scaramucci said during an interview on CNN.

As Trump’s people prepare to take the helm of the government’s scientific enterprise — including taxpayer-funded research by U.S. EPA, the National Oceanic and Atmospheric Administration, NASA and more — academics, tech developers and data-storage companies are teaming up to make sure work done under the Obama administration is preserved.

Tools like EPA’s greenhouse gas equivalencies calculator and NOAA’s sea-level rise and coastal flooding impacts viewer must stay accessible and up-to-date over the next four years, advocates argue, because they are essential to regional, state and local planners who will continue to work on climate adaptation and mitigation. Also key is EPA’s environmental justice screening and mapping tool, which shows which communities are most vulnerable to climate impacts.

Thanks to the Obama administration’s open government initiatives, a tremendous amount of climate data lives on the web, said Gretchen Goldman, research director for the Union of Concerned Scientists.

Speaking to E&E News from the American Geophysical Union’s fall meeting this week in San Francisco, where scientists are gearing up to defend their roles and responsibilities, Goldman emphasized the "commercial value" of the data. She said maintaining the databases would be in the government’s "best economic interest."

Most concerning to some observers is the threat to data sets produced from U.S. weather stations and satellites and NASA’s monitoring of global sea ice cover, which sparked a Trump adviser’s threat to gut the funding for NASA’s climate work (Greenwire, Nov. 23).

The U.S. government leads the world in knowledge of the climate system, and the loss of such monitoring resources would have a serious impact on transparency efforts among nations that have committed to curb greenhouse gas emissions under the Paris Agreement.

Without U.S. satellites, "we don’t know if states are living up to obligations under their [nationally determined contributions]," said Simon Nicholson, director of the global environmental politics program at American University’s School of International Service.

Beyond policy solutions to climate, federal data allow companies and nonprofits to plan for the future. For instance, NOAA’s short-term and mid-range forecasting helps international aid groups to plan allocation of resources on the ground in vulnerable areas.

President George W. Bush had a chilling effect on climate science within federal agencies and research labs, Nicholson said, because the administration engaged in "political meddling in how those results were conveyed" and cast doubt over findings and reports. He described how "lines and sometimes whole reports were rewritten" to make climate science seem much more uncertain than it was.

"But we’re facing a very different ideological moment than we faced during the Bush years," Nicholson told E&E News.

Efforts are underway in the United States and Canada to try to catalogue the research amid uncertainty about what the president’s policies will mean (Greenwire, Dec. 13).

Trump’s team has highlighted meetings between the president-elect and climate activists Leonardo DiCaprio and former Vice President Al Gore, while Trump himself has suggested he has an "open mind" on the issue of global warming.

Eric Holthaus, a meteorologist and activist who has been a leader in the data preservation effort, acknowledged yesterday in an interview on NPR that the most-likely scenario under Trump would be across-the-board budget cuts to federal agencies. Computer science professors and developers are engaging in the effort to put the data on the cloud or scatter it so that they are harder to access, he explained, for anyone with malicious intent.

Fox News’ Megyn Kelly tried to pin down Trump transition spokesman Jason Miller on Tuesday night about whether Oklahoma Attorney General Scott Pruitt (R), the nominee to head EPA, believes in climate change. After repeated attempts, Kelly told Miller he was "not really answering" and asked if it was a hard question.

"No, I think it’s a straightforward answer in the fact that we want to see sound science in this," Miller responded, "that we want to see people go through and see what we need to do to take care of the environment and make sure that we’re keeping our country clean and safe.

"But also, too, we’ve seen a lot of the science absolutely start running amok," Miller added, accusing "the left" of wanting "to try to pull us into the debate."

Scientists are gearing up, Goldman said: "If the [next] administration were to remove data or otherwise inappropriately alter it, I think they should expect a fight."