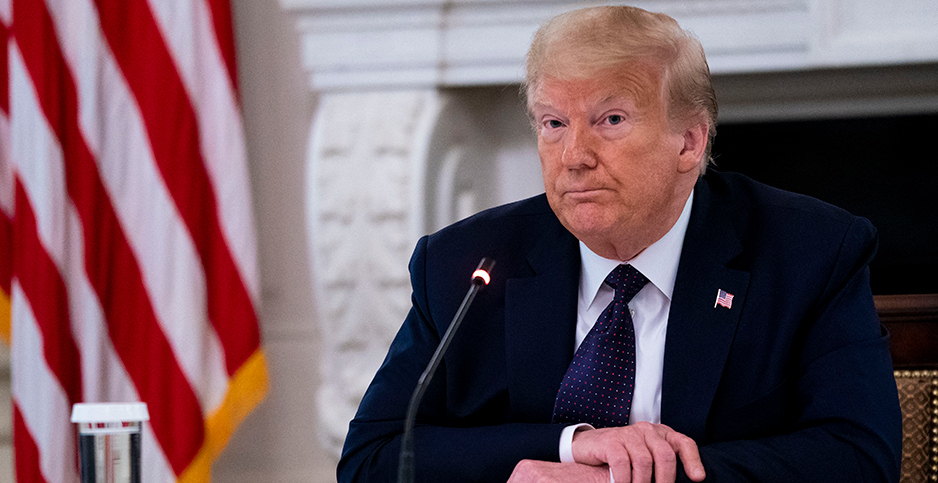 A second Trump term could lead to a more aggressive rollback of regulations and an attempt to undermine bedrock environmental policies, Trump advisers and supporters say. Pool/Abaca/Newscom

A second term for President Trump would mean a more aggressive dismantling of environmental policy and an expansion of the fossil fuel industry, according to energy advisers who work closely with the White House.

These outside advisers have suggested a slate of energy priorities for Trump to pursue if he’s reelected. They want to cut renewable energy standards, waive marine shipping requirements on liquefied natural gas, increase energy leasing of public lands and launch a robust assault on environmental regulations that would have a lasting effect beyond Trump’s presidency.

They also want a "Pittsburgh air accord" that would replace the international Paris climate accord, from which Trump is expected to formally withdraw the United States in November.

First, though, Trump has to win.

And he has said he will use the Green New Deal — and its aim to fight climate change with a government-led jobs program — as a bludgeon to attack former Vice President Joe Biden. Trump’s campaign already has taken steps to frame Biden as an opponent of the oil and gas industry.

While campaign officials would not comment on Trump’s energy platform, outside advisers who remain influential in the White House discussed with E&E News some of the ideas they’ve promoted in closed-door meetings.

The 2016 campaign provided a stark contrast on energy policy ideas, so Trump plans to largely run on the same winning message, said Myron Ebell, the former head of Trump’s EPA transition team and the director of the Center for Energy and Environment at the Competitive Enterprise Institute.

Trump is looking to portray Biden, the presumptive Democratic nominee, as further to the left on energy issues than Hillary Clinton, the Democrats’ 2016 nominee, Ebell said. Ohio and Pennsylvania would be prime targets for this message.

"I don’t know that they have to do anything; they just have to sit here and say, ‘Here’s what our policies are,’ and compare them to the proposed policies of the Biden campaign," Ebell said. "It’s up to the voters to make the choice."

Environmentalists have repeatedly warned that Trump’s approach has — and will — hurt efforts to address climate change at a moment when research shows the globe is at a dangerous tipping point.

Environmental groups have called Trump the worst president for the environment in history. Sierra Club Executive Director Michael Brune said Trump "does not care about the air we breathe or the water we drink, and he is willing to sell them out to the highest bidder."

It remains to be seen what energy issues Trump actually will discuss on the campaign trail. He is expected to resume rallies in the next few weeks after he took a hiatus because of the coronavirus pandemic.

Regardless of the public messaging, energy advisers in White House meetings already have lined up their priorities. Despite the help Trump already has given the fossil fuel industry, there is more to be done in a second term, outside advisers said. That includes going after more regulations as well as expanding energy markets.

Waiving requirements on marine transportation would mean more natural gas produced in the United States could be shipped to additional American ports, including Hawaii, Alaska and Puerto Rico, said Jason Isaac, a senior manager and distinguished fellow at the Texas Public Policy Foundation.

Another way to promote the transportation of more American LNG would be a five-year pause in the Jones Act, which requires that ships transporting goods between American ports be built, owned and operated by U.S. citizens. He said no U.S.-built ships are currently able to transport LNG, and a pause would give adequate time for shipbuilders to construct a fleet.

Isaac has pitched in meetings with White House officials a "Pittsburgh air accord" that would take the place of the Paris Agreement. The name is a riff on Trump’s comments in 2017 after he announced a withdrawal from the international climate agreement; Trump said he was elected to represent Pittsburgh, not Paris. It would focus on reducing air pollutants, a move that would benefit natural gas at the expense of coal.

"If we can get people around the world to adopt our air quality standards, I think it would be beneficial to the United States and the rest of the world, and that’s how you improve the environment," he said.

Outside advisers also are pushing for a repeal of the renewable fuel standard, which requires the use of biofuels in gasoline production.

The oil and gas industry has long been critical of the requirement, and it successfully pushed the administration to grant waivers for refiners a number of times in Trump’s first term.

Because demand has fallen during the coronavirus pandemic, conservative groups that hold sway in the White House have pushed to waive standards on the use of ethanol. In an April letter, they pointed to the use of ethanol in hand sanitizer and said the renewable fuel standard "could divert critical resources from needed sanitizer production to an irrational mandate in the face of falling demand."

The administration should also work to streamline the permitting of energy projects through a single agency, which is how Canada does it, said Mike McKenna, a former Trump energy adviser who still communicates with the White House. He said he would like to see more government accounting of what regulations cost. In addition, he said a second Trump term should take a comprehensive look at government spending on global warming and review key data that’s used to track climate change.

"I also find it remarkable that we don’t have a single government source that tells us every year how much we spend on climate change across the federal enterprise," he wrote in an emailed response. "It would be great to have a hard look at the temperature databases."

The administration should more often examine the cost of regulations and work to reframe the cost-benefit analysis, said Tom Pyle, president of the American Energy Alliance and a Trump campaign adviser in 2016. In addition, he said, the administration needs to wind down clean energy subsidies. He added that he has pitched a rolling lease process for energy resources so that projects can be evaluated on an ongoing basis, not every few years.

"We need to do seismic everywhere; we need to have a real sense of what we have, the resource base we have," he said.

Pyle said Trump is sympathetic to the idea of revisiting EPA’s endangerment finding for greenhouse gases — which is the legal basis for global warming policy — though he expects the campaign won’t engage in any debate over the consideration of carbon dioxide as a pollutant. He said he is hopeful that the White House would try to push a debate over whether CO2 should be regulated through Congress.

"I believe the president wants to have that discussion," he said. "Instinctually, you have seen over the last four years where he is on this issue; Paris is one of those issues where everyone thought he would cave to the pressure and he didn’t, so this is just an extension of that."