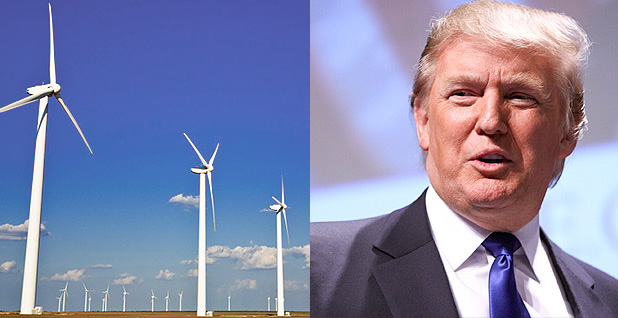 Three days before President Trump declared that wind power doesn’t work "all that well," his Energy Department released a report stating that wind power installations are "robust" and prices are "falling."

Trump, speaking in France at the Group of Seven summit earlier this week, dismissed the notion that the renewable power source could help curb climate change.

"I’m not going to lose that wealth on dreams, on windmills, which, frankly, are not working all that well," he said.

"This Administration has proven that we can pursue renewable energy advancements and deployment, particularly wind energy resources, which are predicted to surpass other sources of renewable power generation this year," Undersecretary of Energy Mark Menezes said Friday in a press release touting a new report on wind energy.

DOE’s report found that the utility-scale land-based wind sector had "another strong year," with 7,588 megawatts installed in 2018, coupled with "record low costs and prices." And the distributed wind sector now stands at 1,127 MW from more than 83,000 turbines across every state in the country. Last year, 12 states added more than 50 MW of distributed wind capacity from 2,684 turbines.

And the trend of using larger wind turbines in distributed applications continued last year, the report found. The average capacity of large-scale turbines was double what it was 15 years ago.

Menezes added that offshore wind would be a "significant part of our comprehensive energy portfolio in the coming years."

According to the American Wind Energy Association, which contributed to the report, the DOE findings capture many of the nuances of the industry. There is currently a record 40 gigawatts of wind power under construction or in advanced stages, according to AWEA.

While Texas continues to lead the nation in installation capacity and industry jobs, a number of new regions have emerged as leaders in development, including ones in Western states such as New Mexico, as well as Nebraska, Missouri, Indiana and Michigan.

Politics of the matter

"We think the President is making a political miscalculation in his comments on wind energy," he said in a statement. Kiernan noted that wind in the swing states of Iowa, Michigan and Texas supports more than 36,000 well-paying jobs, 82 factories and revenue exceeding $436 million a year for farmers, ranchers and local governments.

Kiernan has argued in the past, so far in vain, that wind manufacturing jobs are prevalent in states that sent Trump to the White House (Energywire, May 20).

The president, however, has not softened his rhetoric when speaking in those regions. During a campaign-themed event in Ohio last month, Trump did not hold back his animosity toward the industry.

"If a windmill is within 2 miles of your house, your house is practically worthless," he said, unprompted. "They make noise, they’re intermittent, they kill your birds, they break down all the time, you have to replace them every 10 years because they wear out, they cost a fortune, and they need subsidy. Other than that, they’re quite good."

Ohio, a swing state, has seen wind power increase in the last decade.

The Buckeye State has seen wind power grow to 738 MW of installed capacity, despite what the industry says has been an unforgiving state regulatory climate (Energywire, July 12).

"I think it goes back to all politics is local," he said. "Our biggest risk to a [wind] project is local opposition" rather than the Trump administration.

But Mike Carr, a former Energy Department official and now a partner at Boundary Stone Partners, is not so sure.

He noted that wind services technician is a high-paying job, with an annual salary of between $70,000 to $80,000 a year. In rural America especially, this makes a huge difference.

"Those are the pillars of the community," Carr noted, adding that workers might not be willing to look past Trump’s "bombastic rhetoric" in 2020 if their jobs are in jeopardy.

Democrats, therefore, see an opening, he said, noting that some candidates have "sharpened" their rhetoric on rural climate and energy jobs like wind and biofuels.