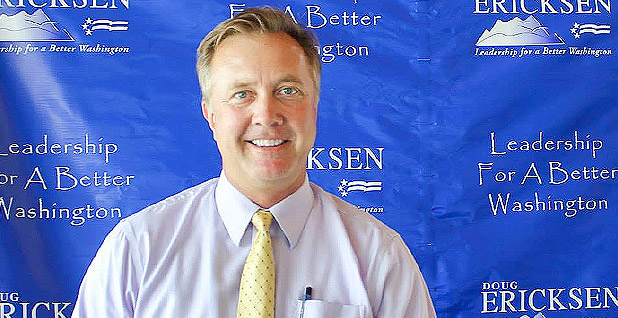 President Trump’s communications director at U.S. EPA is interested in continuing to work for the administration in the Pacific Northwest.

Among the jobs Doug Ericksen would consider taking would be working in EPA’s Seattle-based Region 10 office, he said during a news conference in Washington state earlier this month.

Ericksen, who is also serving in the Washington State Senate, was asked whether he was interested in leading EPA’s regional shop.

"What I would like to do in the future, if something became available to serve the administration and I was asked by the president to serve in a capacity in the regional level, whether it’s with the EPA or the Department of Interior or the Department of Ag, all of those things would be things that I would consider," Ericksen said in the video aired by TVW and posted by The Bellingham Herald.

Ericksen, who was Trump’s Washington state campaign deputy director, has been leading EPA’s communication efforts during the presidential transition period. He’s part of the administration’s so-called beachhead team, a wave of early political appointees with temporary appointments at the agency that could be extended.

The state senator said he hasn’t been offered a regional job by the administration, but he’d like to head back to his home state.

"I have kids who are in high school, and why I took a temporary position and not a permanent position with the EPA right now is because I do not want to move my family to Washington, D.C. So if something came up regionally, I would definitely consider it, but nothing has been offered to me. There is nothing guaranteed in this deal that we’re doing," he said.

He said he’d like to see changes in the region’s energy and environmental policies. That regional office oversees Alaska, Idaho, Oregon, Washington and native tribes.

"I think in Region 10 EPA, things could be done differently," Ericksen said during the news conference. "In the regional positions for [the Federal Emergency Management Agency], for Ag, for Interior, I think you’re going to see changes — as you would expect with any administration — coming to the West Coast also but the regional appointments that come from the new administration."

Ericksen also elaborated on his personal views on climate change.

"My view is that there definitely could be an impact from humans on climate. Is it as big as people say? We’ll find out, and we’ll continue looking at that," he said.

At EPA, Ericksen said, the Trump administration will be working on "expanding the science … to allow people who have been denied the ability to have their views brought forward and allow it. There were stories saying we were going to lock down on science, and it’s actually the opposite. New science will be allowed in; more people will have a voice when it comes to debating the science of issues at the EPA."

Ericksen said he’d like to see the Trump EPA bolster nuclear waste cleanup at the Department of Energy’s Hanford Site in his home state.

"As a state legislator, I would love to see us actually get work done at Hanford," he said. "We have been in a holding delay pattern over there for far too long, and we have a new administration that likes to get things done, and hopefully, we will change our tune and actually start getting it done at Hanford and getting it cleaned up, so that will be the new direction for the EPA, is to get it done."

EPA’s 10 regional positions are responsible for managing EPA’s regional activities under the direction of the EPA administrator. They promote state and local environmental protection efforts and serve as liaisons to state and local officials.

Those regional offices could soon be the targets of cuts under the Trump administration. Myron Ebell, who led the Trump EPA transition team, said in January that he’d like to see the agency’s regional branches "cut significantly over time." He emphasized that he was speaking for himself and not the administration (Greenwire, Jan. 26).

The agency’s Region 10 office was led under the Obama administration by Dennis McLerran, who had previously been executive director of the Puget Sound Clean Air Agency.

Appointments for EPA’s regional offices may not be made for quite some time. The new administration is expected to begin staffing up for key EPA political jobs after Oklahoma Attorney General Scott Pruitt’s likely confirmation as administrator, but filling slots for program office leaders and regional bosses can be a lengthy process. McLerran was appointed in January 2010, about a year after President Obama took office.

Ericksen, who’s taken political heat back home for serving at EPA while keeping his state Senate seat, said he’d resign his Senate job if he took a permanent job with the administration.

Some local residents have launched an effort to recall Ericksen amid criticism that he cannot do both jobs at once, the Associated Press reported.

Ericksen has said that his work has been cleared with state and EPA ethics officials and that the criticisms are being lodged by those with political motives.