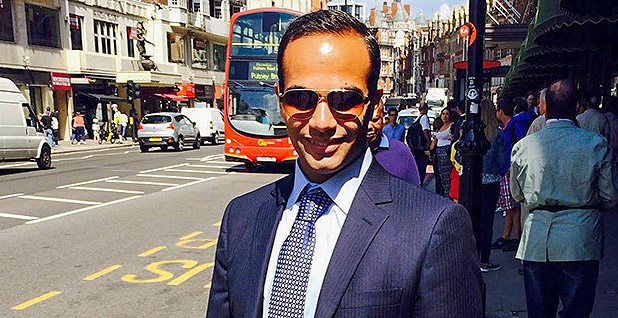 George Papadopoulos, the former Trump campaign adviser who pleaded guilty earlier this month to lying to federal agents about his contacts with Russia, touts his work as an "energy consultant."

Court records released today show Papadopoulos pleaded guilty to the charge he denied meeting with Russians when questioned as part of the ongoing federal probe into that country’s interference in last year’s U.S. election.

Papadopoulos is the first person to plead guilty in the high-stakes investigation led by former FBI Director Robert Mueller.

Document say Papadopoulos, who had contact with Russians in an effort to get damaging information about Democrat Hillary Clinton, is cooperating with Mueller’s team.

Papadopoulos served as a Trump foreign policy adviser beginning in March 2016 and has worked for much of the past decade on oil, gas and energy, according to his LinkedIn profile.

The profile quotes the president as saying, "George is an oil and gas consultant, excellent guy," but does not say when he made the statement.

Much of Papadopoulos’ work appears to concentrate on speaking at international conferences on energy issues. That includes meetings in London, Athens and Israel, where his remarks often assessed the impact on global security on energy markets.

One of his longest energy-related jobs was as a research associate for the conservative Hudson Institute in Washington, where he led its eastern Mediterranean energy security project, according to the profile.

Papadopoulos said he was "liaison between various countries of the region (Greece, Cyprus, Egypt, Israel and Lebanon), and [worked on] analyzing the impact of the Eastern Mediterranean and Caspian hydrocarbon reserves on regional energy security."

He told the Russian-backed news agency Interfax while a campaign adviser in 2016, "The U.S. and Russia will compete over both the European and Pacific gas markets. This is inevitable. Unfortunately for the U.S., sanctions on Russia have resulted in massive energy deals between Russia and China."

Before working for Trump’s campaign, he was adviser to the presidential candidate Ben Carson, who is now secretary of Housing and Urban Development.

This afternoon White House Press Secretary Sara Huckabee Sanders said the developments have nothing to do with the president or collusion with Russia.

She said Papadopoulos’s role on the campaign was "extremely limited." She also called it a "volunteer position."