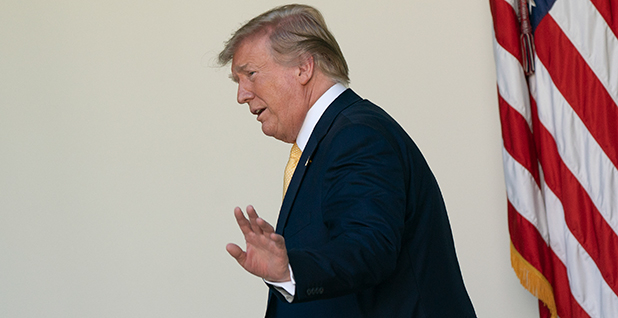 President Trump’s executive order Friday mandating a review of federal advisory committees could upend the decisionmaking process at the Department of Energy and on energy-related panels in other agencies, analysts say.

The order directed agency heads to evaluate the need for committees created under the Federal Advisory Committee Act and, by September, cut a third of them. The White House framed the order as a long-overdue analysis of government spending, asserting that a review of federal advisory committees has not been done in 26 years.

"The President believes it is time to once more review and eliminate ones that are not relevant and providing valuable services so that we are good stewards of the taxpayers’ money," White House spokesman Judd Deere wrote in an email.

The order says that terminated committees should include those where "stated objectives of the committee have been accomplished" and the subject matter or work of the panel "has become obsolete."

It’s not clear yet which committees the order could cut, and analysts noted that of the 1,000 committees across the federal government, 600 are governed under statute and would not be immediately affected. Under the order, agency heads also can request a waiver from the Office of Management and Budget.

But at DOE, the Secretary of Energy Advisory Board (SEAB) and other panels could be affected. Jeff Navin, a former DOE chief of staff during the Obama administration and a consultant, called SEAB "the big one" at DOE in terms of advisory committees, partly for its historical role counseling the Energy secretary on a variety of energy, science and national security issues.

SEAB was convened by Energy Secretary James Watkins in the George H.W. Bush era. The committee’s use has fluctuated over the years, but former Obama-era Energy Secretaries Steven Chu and Ernest Moniz relied on it (Energywire, May 11, 2017).

It did not meet for the first two years of the Trump administration, but earlier this year, Energy Secretary Rick Perry appointed members, many of them with experience in the oil and gas, nuclear, and reliability sectors (Greenwire, Feb. 20).

Eight members met for three hours for the first time in March, according to minutes posted online. The members were briefed by Perry and other DOE leaders on science, technology, engineering and math, or STEM; supercomputers; and cybersecurity.

DOE’s Office of Science programs are overseen by advisory committees and have been meeting multiple times a year during this administration. The same is true for the agency’s nuclear office. Those committees also could be disbanded by the order.

Other potential targets are the National Petroleum Council — which meets twice a year to provide expertise on oil and natural gas matters — and the Appliance Standards and Rulemaking Federal Advisory Committee, which was established to improve DOE’s process of establishing appliance standards.

Advisory committees at DOE allow scientific and technical experts to offer guidance to the agency for free, he said. "Picking an arbitrary number of committees to cut and applying it across the government is a pretty lazy way to manage outside experts," he wrote in an email.

Yet Addison Stark of the Bipartisan Policy Center called the advisory boards critically important but said it’s hard to determine the impact of the executive order. "There could be a positive outcome — make DOE look critically at how they are utilizing them," he said.

Operating costs of the DOE committees hover in the $200,000 range, according to federal data. A senior administration official said the total cost of all the committees is about $400 million a year.

Science organizations generally expressed outrage over the Trump plan, while many fiscal conservatives cautioned people not to "overreact."

Drew Bond at the American Council for Capital Formation said the order "is not inherently anti-science, but rather anti-waste of taxpayer dollars."

But the Union of Concerned Scientists maintained that the Trump administration has tried to shrink the role of the advisory committees for the past 2 ½ years.

"Now they’re removing the possibility of even making decisions based on robust science advice," said Gretchen Goldman, research director at UCS. "It’s no longer death by a thousand cuts. It’s taking a knife to the jugular."