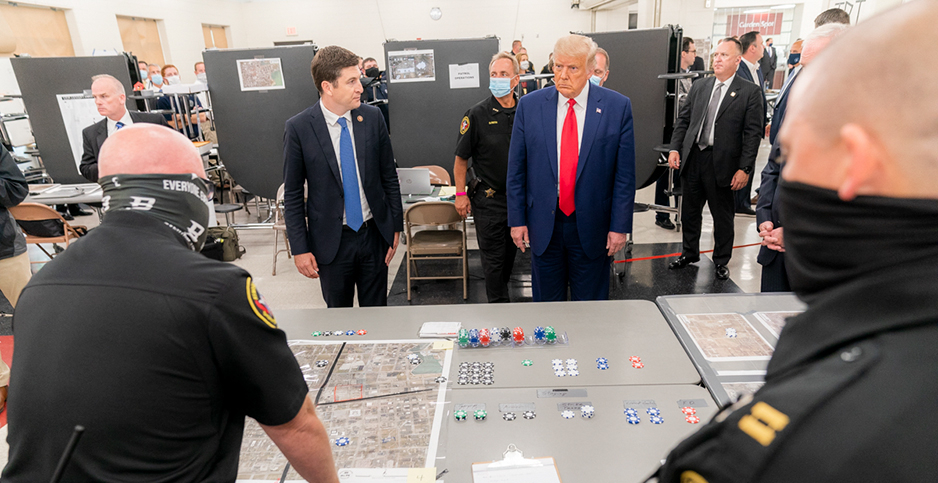 President Trump getting a briefing from law enforcement this week in Kenosha, Wis., which has seen days of protests calling for racial justice in policing. Shealah Craighead/White House/Flickr

President Trump yesterday signed a memo that could restrict federal dollars from going to "anarchist jurisdictions" — a threat that could affect Superfund cleanup sites and other environmental programs.

Trump’s memo follows civil unrest in cities that has followed police shootings and deaths of Black Americans nationwide. Critics called it a politically motivated jab that is both unusual and illegal.

"My Administration will not allow Federal tax dollars to fund cities that allow themselves to deteriorate into lawless zones," the memo reads, adding that his officials must review all federal funds by "jurisdictions that permit anarchy, violence, and destruction in America’s cities."

The memo — which defines an anarchist jurisdiction as one that "disempowers or defunds police departments," among other criteria — directed agency chiefs to submit a report to the White House Office of Management and Budget "detailing all Federal funds provided to Seattle, Portland, New York City, Washington, D.C., or any components or instrumentalities of the foregoing jurisdictions."

After the president signed the memo, OMB chief Russ Vought added on Twitter: "We will explore all options."

Democratic mayors and lawmakers have quickly decried the move. Rep. Don Beyer (D-Va.), whose district is just outside Washington, called the memo a "specious campaign document."

"Any attempt to withhold funds on such flimsy pretext would immediately be challenged in court," he said in a statement.

While most environmental and energy programs are funneled through the states — not directly to cities — experts noted there are exceptions.

A big one could be Superfund sites, which are located in the four cities Trump identified in his order and depend on federal dollars for cleanup.

"Wow, I guess he could do it, because a lot of those cities have sites where there is no viable responsible party," said Betsy Southerland, a former EPA water career official. "So you are dependent on federal dollars to clean them up."

One example is the Washington Navy Yard near Capitol Hill. Seattle has the Lockheed West site, where past industrial activities have contaminated the soil with arsenic, chromium, copper, lead and other metals.

A complex cleanup in the Portland, Ore., harbor includes a 10-mile stretch on the Willamette River, and according to the city’s website, a combination of government agencies — including EPA — is currently drafting cleanup plans for 13 separate sites.

And New York City has multiple sites, including Newtown Creek, a tributary of the East River near the Brooklyn-Queens border.

There are other exceptions, too. Joel Mintz, a former EPA enforcement official, said the agency lends money to cities to build or update sewage treatment plants.

In addition, most Energy Department dollars do not go directly to cities, but some do. The agency’s energy efficiency and renewables office every year doles out more than $300 million directly to cities or via state energy offices.

Most of it is for weatherization — programs that help low-income residents weatherproof their homes to cut energy costs — and some money is awarded to proposals. In fact, the city of Seattle recently won an award for a proposal on conservation research, according to the website USAspending.gov.

Yet Jeff Navin, a senior Obama-era Department of Energy official, pointed out that Congress passed a law that forbids the executive branch from withholding money — which is essentially what this memo orders agencies to do.

"It’s hard to see how any agency can comply with a literal reading of this order and not violate the Nixon era Impoundment Control Act," he wrote in an email.

James Goodwin, a senior policy advocate at the Center for Progressive Reform, said the memo reminded him of the funding-related threats Trump has made to California, claiming that homeless people caused water pollution from discarded heroin syringes (E&E News PM, May 21).

Since Trump signed the memo, sarcasm and speculation have abounded on social media. One Twitter user joked, "Sounds like defunding the police to me," a barb at the president’s attempt to make "Law and Order" the centerpiece of his campaign. A different user said the effort sounded like an attempt to cut funds for roads and bridges.

D.J. Gribbin, a former White House adviser, pointed out in an email that "truly ‘anarchist jurisdictions’ would be unlikely to have the planning skills necessary to advance major infrastructure projects."