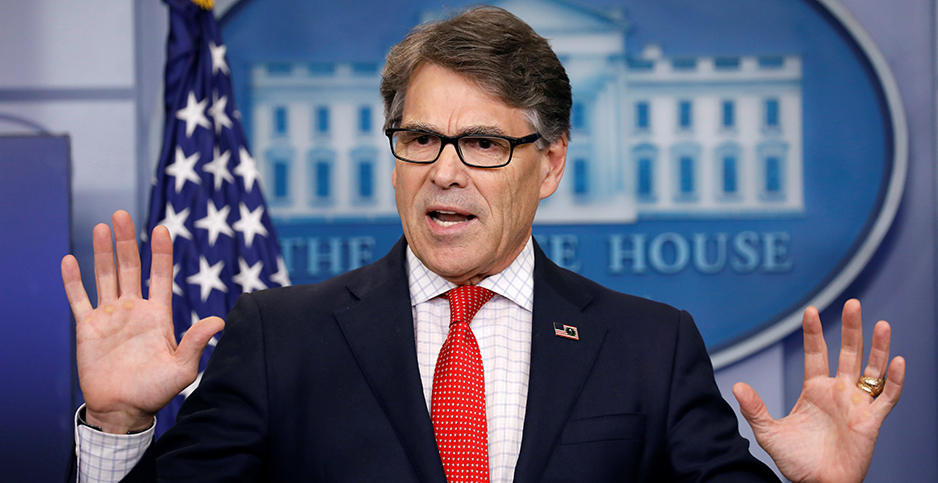 Eighteen months later, that memo signifies the start of a series of unsuccessful attempts by Perry and his policy team to help President Trump fulfill his campaign vow to revive the struggling coal sector.

Perry disclosed last month that an Energy Department plan to channel subsidies to coal-burning and nuclear plants tagged for early retirement had stalled at the National Security Council. "It’s still being bandied around the White House," Perry told reporters. And yesterday, an administration official told E&E News that the "poorly articulated" DOE proposal was floundering at the National Economic Council after failing to gain support among top Trump officials (Greenwire, Oct. 16).

The administration’s ill-fated effort to extend a financial lifeline to coal also faces serious opposition from outside the White House, where it’s been denounced by oil, gas, wind and solar interests. And it faces a challenge from the right, where conservatives oppose energy subsidies and are hostile toward the idea of a federal intervention in power markets that’s paid for by electricity consumers, according to multiple industry and political sources who say they talk regularly with White House officials on this issue.

Despite those headwinds, sources say the policy could still see the light of day given Trump’s personal investment.

"There are some folks in the administration who think this is a horrible idea, but the boss wants what the boss wants," said one industry source. "There have been some who have been trying to either ameliorate or insulate this decision so as to make it less onerous, the people who see power markets as sacrosanct."

The administration official, who was not authorized to speak for the White House and asked to remain anonymous, agreed the policy could survive, just not in its current form.

And in a note to clients, energy analyst Rob Rains of Washington Analysis LLC said that although it’s increasingly unlikely the White House will move forward with the policy, Trump left the doors open for future action.

"If we’ve learned nothing about this White House in its nearly 20 months in office," Rains wrote, "it is that policies never truly die and a resurrection when Trump is back on the ballot in 2020 remains a distinct possibility."

The aim: to keep alive possibly dozens of older, smaller, money-losing coal plants whose owners were ready to scrap them for more efficient gas generation or cleaner renewable power sources.

Initially, DOE stressed the importance of maintaining a diverse portfolio of "baseload" coal and nuclear plants running around the clock. Grid officials responded that there was plenty of spare power plant capacity, and the threatened plants weren’t needed.

Perry sought subsidies from the Federal Energy Regulatory Commission, but the independent agency turned him down 5-0 in January.

This year, his policy team clustered around a national security argument: Coal and nuclear plants, with on-site fuel storage, were fundamentally more secure than natural gas plants claiming an increasing share of the nation’s energy portfolio. And the reason for bold administration action would be heightened security threats from hacking campaigns and natural disasters that could cripple parts of the electricity system reliant on the pipeline delivery of natural gas.

But the two laws on which a national security rationale would stand — the Korean War-era Defense Production Act and 2015 amendments to the Federal Power Act — were emergency authorities, poor fits for a subsidy program that DOE said should run for two years, according to critics (Energywire, May 11).

National security remained the policy linchpin. Details of the plan, contained in a "pre-decisional" DOE draft that leaked in June, called for the creation of a "strategic electric generation reserve." The government would order grid operators to purchase electricity from U.S. coal and nuclear plants to prevent their "premature" retirement. It revealed just how far the administration might be willing to go as it sought ways to force utilities to extend the life of power plants that aren’t profitable to operate in today’s energy markets.

For much of the past decade, as power demand stayed flat, electric companies and power markets have been shifting to natural gas, energy efficiency and wind power, all cheaper and cleaner sources of electricity. Solar panels, battery storage, utility investment and state policies all point toward the managed closure of coal and nuclear plants.

As of June, DOE listed 63 coal and nuclear power plant generators in the Lower 48 states with announced retirement dates between now and the end of 2023, with a total capacity of just over 18,000 megawatts, enough power to serve nearly 14 million homes. DOE has not disclosed how many were on its rescue list or estimated what bailouts could cost consumers.

DOE described the two years of payments as a "stopgap" defense while the agency completes a detailed assessment of vulnerabilities and interdependencies among electricity, natural gas and other infrastructure.

In an interview with E&E News, Bruce Walker, DOE’s assistant secretary for the Office of Electricity, said the department is building a national security framework that would protect certain power plants. Along with the Defense Department, the Department of Homeland Security and other federal agencies, Walker said, DOE has determined which plants and other electricity infrastructure the government views as vital to supporting the most important military bases.

Walker said DOE has tried "to really understand" the power plants and other infrastructure that could tie into a U.S. defense policy. "Then we can employ strategies to protect them better from things like a cyber threat as well as physical threat," he said.

The task of selecting "defense critical electric facilities" was assigned to DOE by Congress in 2015 under the Fixing America’s Surface Transportation (FAST) Act. In advance of, or during, a presidentially declared grid emergency, the Energy secretary would have wide-ranging authority to order particular plants and substations to operate or shut down.

The FAST Act analysis fed into the leaked DOE document with its call for a strategic electric generation reserve, Walker indicated. "So one might expect that as we go through and define what qualifies as defense-critical electric infrastructure, that once you’ve done that," he said, "you would then develop strategies that are going to best enable the entire system to operate, specifically those pieces that are relevant to national security."

When Perry took over DOE, much of the FAST Act work had not been completed. Walker, who stresses DOE’s security role, said the "series of strategies" being developed focuses on the "survivability" of electricity facilities near military bases.

Walker declined to discuss the status of the DOE draft document that landed at the White House. Walker also did not explain how the "baseline" list of power plants supporting military bases could be tied to the president’s goal of slowing or halting coal and nuclear plant closures. The baseline list is classified, Walker said. "And so we have no intention of going public with any of it."

That secrecy collides head-on with any government plan to force power plants to continue operating, which could hardly be done in secret.

Trump in recent months has taken to dropping hints at political rallies that a policy was on its way to save the nation’s ailing coal sector.

At a rally in West Virginia this summer, Trump cast windmills, gas pipelines and solar panels as vulnerable to wartime destruction before foreshadowing a "military plan."

"You know what you can’t hurt? Coal," Trump said from his podium to applause. "We’re working now on a military plan that’s going to be something very special."

Two months prior, White House spokeswoman Sarah Huckabee Sanders said Trump had directed Perry to prepare "immediate steps" to halt the loss of "fuel-secure power facilities" and that the president was looking forward to Perry’s recommendations. The presidential directive stemmed from a commitment Trump made early in his administration to two top coal and nuclear executives, according to his staunch supporter, Bob Murray, chief executive of Murray Energy Corp. (Energywire, Aug. 23, 2017).

But sources say mounting opposition in the White House and Pentagon centers around the belief that extending blanket support to aging coal and nuclear plants in the name of military security is stretching the concept too far.

The military requires base commanders to ensure that they have 24/7 power to complete their critical missions. They’re expected to craft their own power security emergency plans, in close collaboration with local utilities, a process that often includes things like microgrids and backup fuel generators stored on-site.

"We’re talking about a very varied system both in terms of the bases and the roles of missions and bases, and of the utilities they rely on," said Sharon Burke, a senior adviser to the International Security Program and Resource Security Program at New America. "There’s no single answer. That’s stupid."

Burke previously served as assistant secretary of Defense for operational energy under the Obama administration and in the State Department under the George W. Bush administration.

As the policy debate over strategies to beef up grid resilience or throw a lifeline to the coal industry continues inside the administration, threats to the electric grid have grown more ominous.

In June 2017, power industry officials confirmed that hackers were trying to break into U.S. nuclear power plants and other energy facilities, an assault given the classified label "Nuclear 17." Eight months later, a joint alert from the Department of Homeland Security and the FBI pinned the sophisticated attack on Russian government cyber war teams. Airlines and other energy organizations were also hit. The attacks failed to damage infrastructure, but they marked a dangerous escalation.

But the threat clock has kept ticking. Karen Evans, assistant DOE secretary leading CESER, was asked at a congressional hearing last month whether the grid was ready for a coordinated cyber strike.

"So, since you asked me, ‘Do I feel confident?’ the answer would be no," Evans replied.