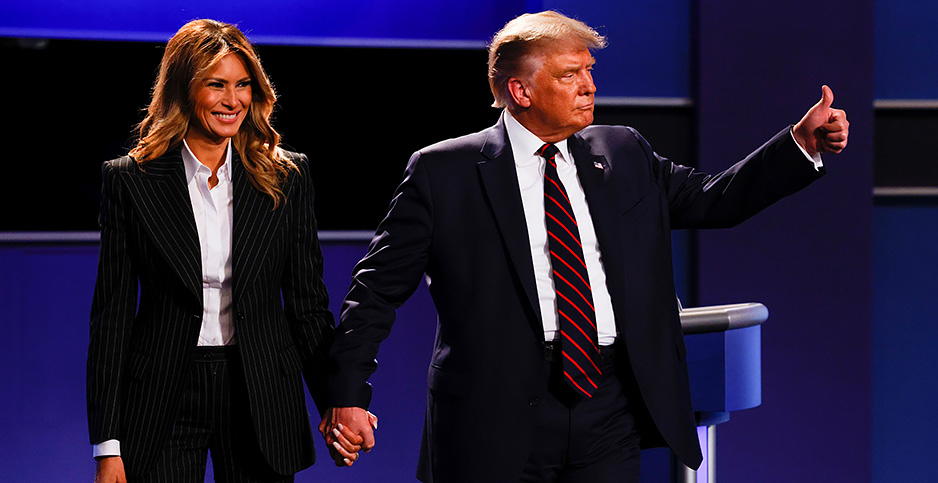 It was not clear if Trump, 74, or the first lady, who is 50, were showing symptoms for the disease caused by the coronavirus, which has claimed the lives of more than 200,000 Americans even as its impact has been consistently downplayed by the White House.

News of the diagnosis came hours after the White House announced that senior Trump adviser Hope Hicks had tested positive for COVID-19, and two days after Trump faced off with Democratic presidential nominee Joe Biden for an in-person debate in Cleveland.

Tonight, @FLOTUS and I tested positive for COVID-19. We will begin our quarantine and recovery process immediately. We will get through this TOGETHER!

Trump’s physician, Dr. Sean Conley, said in a statement that he expects the president to continue carrying out his official duties "without disruption" as he recovers.

"The President and First Lady are both well at this time, and they plan to remain at home within the White House during their convalescence," Conley said in a memo.

The announcement sent shock waves through global stock markets, with Dow futures plunging by more than 400 points early in the morning. It also raised a barrage of questions about how many officials may have been exposed to the virus.

A spokesperson for Vice President Mike Pence said on Twitter that Pence and second lady Karen Pence had both tested negative for the coronavirus this morning.

"Karen and I send our love and prayers to our dear friends President @realDonaldTrump and @FLOTUS Melania Trump," Pence said on Twitter. "We join millions across America praying for their full and swift recovery. God bless you President Trump & our wonderful First Lady Melania."

While there is no sign Trump is seriously ill, Pence would be next in line to assume the duties of president were Trump to die or become incapacitated, followed by Democratic House Speaker Nancy Pelosi, according to the presidential line of succession laid out in the U.S. Constitution.

He had been scheduled to travel to Wisconsin tomorrow for back-to-back campaign rallies before learning of his diagnosis. "As too many Americans have done this year, @potus & I are quarantining at home after testing positive for COVID-19," Melania Trump said on Twitter. "We are feeling good & I have postponed all upcoming engagements. Please be sure you are staying safe & we will all get through this together."

The Biden campaign said the former vice president would be tested for the virus this morning. Biden, 77, is the oldest candidate ever to lead the Democratic Party in a presidential election. Trump is also the oldest Republican to ever top the ticket.

The risks of severe illness from catching COVID-19 increase with age, according to the Centers for Disease Control and Prevention. The CDC estimates that 4 out of 5 U.S. coronavirus deaths have been in adults 65 years and older. Still, the vast majority of people who contract COVID-19 recover.

U.S. Secretary of State Michael Pompeo, in early morning remarks to press while en route to Croatia for an official visit, said he was "feeling fantastic."

"I was tested about 30 minutes ago," he said, according to a State Department transcript. "That would be the fourth time I was tested in the course of the last two and a half weeks. … I actually have not been with the President since the Abraham Accords on the 15th."

Another Cabinet official, Energy Secretary Dan Brouillette, was in Montana and had been scheduled to tour a power plant today. He shared a photo of himself on Twitter yesterday standing near Crow Nation Chairman Alvin Not Afraid and a third person, none of them wearing a mask.