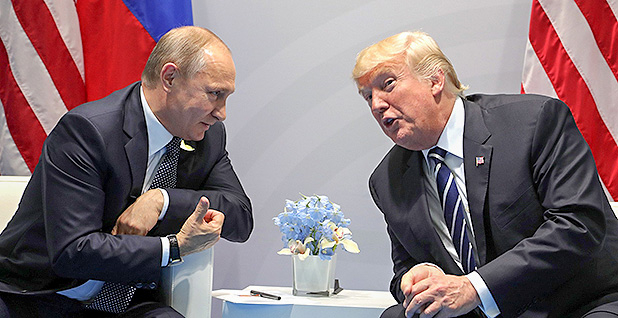 President Trump talked yesterday with Russian President Vladimir Putin in an effort to convince him to bring to an end a global price war that’s crippling U.S. oil producers.

The call came days after Secretary of State Mike Pompeo talked with Saudi Crown Prince Mohammed bin Salman, telling him the kingdom has a "real opportunity to rise to the occasion and reassure global energy and financial markets."

But analysts say that despite the stepped-up engagement, there may be no easy resolution to the situation because the United States doesn’t have the leverage and neither of the countries has much of an incentive to reverse course.

The White House said after the call that Trump and Putin "agreed on the importance of stability in global energy markets."

Yet the Kremlin, which said the call was initiated by the United States, didn’t go that far. It said the two presidents "exchanged views on the current state of the global oil market and agreed that Russian and American energy ministers should hold consultations on this topic."

The call came as U.S. producers are exasperated by the situation and as Trump allies in energy-producing states increase pressure on the administration to take action.

"It’s essential that the U.S. engage," said Jeff Kupfer, who served as an acting deputy secretary and chief operating officer at the Department of Energy under President George W. Bush. "I’m all for the president on down engaging in this and trying to end up with a reasonable solution."

But, he added, "there’s a lot of pain out there, and I’m not sure there is a silver bullet; no matter what it is that’s going to solve all problems, it’s a tough time for everybody."

Prices have hit historic lows as Russia and Saudi Arabia have decided to flood the markets with oil, even as the novel coronavirus pandemic has brought global economies to a standstill.

"Oil is at $20 a barrel," Hoeven said. "This is not a long-term deal. This has to happen now. And the president has weighed in very vigorously and so we’re hopeful."

But there is "no prospect for an output agreement" that would help U.S. shale producers, Sandy Fielden, an analyst for Morningstar, said in a research note.

The shale sector was a major beneficiary when OPEC and Russia agreed to cut their production in 2016. The international agreement kept prices high, which allowed American drillers to expand production and reap profits. U.S. sanctions on Russian oil production also benefited the U.S. industry.

The Trump administration’s outreach to Saudi Arabia and Russia is unlikely to succeed, partly because of acrimony among the oil producing countries and partly because it would be hard to get cooperation among the dozens of U.S. oil companies, Fielden wrote.

"It’s hard to imagine how the typically boom-and-bust shale model could operate within the confines of a production ceiling such as might be imposed by an output agreement between the U.S. and Saudi Arabia or other producers," Fielden wrote.

"Quite apart from the incompatibility of the shale model with an output ceiling, the breakup of the OPEC agreement in February points to deeper challenges within the cartel that would be hard to paper over," he said.

It’s more likely that shale companies will simply shut down production, and there are signs that it’s beginning to happen.

The price of West Texas Intermediate crude fell below $20 a barrel yesterday, and pipeline companies began limiting shipments from some oil producers in Texas over the weekend (Energywire, March 30).

"Weaker producers will be bankrupted, and mergers and acquisitions will proliferate," Fielden wrote. "A core set of the strongest shale producers will survive the downturn."

A group of Republican senators last week called on the State Department to deploy additional diplomatic pressure on Saudi Arabia, warning that the United States would otherwise turn to retaliatory tactics, including "tariffs and other trade restrictions" (E&E Daily, March 26).

In an interview with CNBC, Sen. Ted Cruz (R-Texas) said yesterday he hoped Trump would use his influence with the Russians and Saudis, saying that by ramping up oil production, the countries are taking advantage of the coronavirus pandemic and hurting U.S. oil and gas producers.

By engaging in "economic warfare," Cruz said, the Saudis were not behaving like a military and diplomatic ally. He said Russia is not a friend of the United States and is treated "accordingly" but that the Saudis are not behaving as a friend when they work to drive down the price of oil and to hurt American producers.

"If they don’t change their course, the relationship with the United States is going to change very fundamentally," Cruz said of Saudi Arabia.

Kupfer said he believes tariffs would be a mistake because the United States could find itself in a "detrimental situation" if the economy and the industry begin to rebound at some point.

"Maybe tariffs would have some arguably short-term impact, but we then finish this with a set of tariffs and we’ve begun to go down the road of a trade war," he said.

North Dakota’s Cramer said the price war between Russia and what he called "our so-called friends in Saudi Arabia" has had a devastating effect that will hurt state revenues. Along with Sen. Dan Sullivan (R-Alaska) and others, Cramer said he has led diplomatic efforts on behalf of energy-producing states in challenging OPEC and the Saudis. He and Sullivan have sponsored legislation to withdraw U.S. forces from Saudi Arabia, a move that analysts warn could affect security in the region.

"I am not going to support 2,500 of our troops in Saudi Arabia or four different missile defense batteries in Saudi Arabia that are protecting Saudi oil assets," Cramer said, "rather than protecting American soldiers in places like Iraq, when these friends of ours are basically waging war on our industry and our jobs and our workers in this country."

The engagement with Putin marks a turnaround for Trump, who just three weeks ago tweeted, "Good for the consumer, gasoline prices coming down!"

But producers have complained that they’re being squeezed, and Trump told the television show "Fox & Friends" yesterday morning that he planned to speak with a "gentleman named Vladimir Putin" in an effort to turn off the spigot.

"I never thought I would be saying this: Maybe we do have to have an oil increase," Trump said on the Fox News program. "Because we do. The price is so low now."

Trump accused Russia and Saudi Arabia of "fighting like crazy" and driving down the price of oil even as demand has dropped because of the slump in travel caused by the coronavirus.

Two weeks ago, Trump said he was a "little bit torn" by low gas prices because he believed they were good for consumers. But he added that he’d get involved in the Saudi-Russia situation "at the appropriate time."

Yesterday, he told the television show that he doesn’t "want to have an industry that’s wiped out."

Historically low oil prices, he said, are "bad for them and bad for everybody."

After Riyadh unveiled its plan to hike production in early March, Russia followed suit with a similar resolution, adding to the surplus that sent prices plunging.

Analysts noted that Russia has made it clear that it is targeting U.S. shale oil production, which it views as giving the United States the ability to impose economic sanctions.

Igor Sechin, CEO of Russia’s state-controlled Rosneft, has established he is not about to allow U.S. shale to take market share at Russia’s expense, said Thomas O’Donnell, a senior energy and international affairs analyst and 2019 resident at the Kennan Institute of the Wilson Center.

He said in an email that Sechin never approved of Russia joining the Saudis in OPEC+ and has gotten Putin on board.

O’Donnell estimated that while the move could bankrupt 20% or more of U.S. shale producers, those producers will be reorganized under U.S. bankruptcy laws or be purchased by competitors.

Elsewhere, O’Donnell said, "this price war is literally bankrupting other oil-producing countries and non-OPEC producers from Mexico, Iraq, and Nigeria to Azerbaijan that will suffer much more severe crises."

Congress has backed sanctions against Russia, and Trump suggested in the "Fox & Friends" interview that he was not interested in lifting them, claiming to the television interviewers that he had imposed them.

"Yes, he’ll probably ask that, he’s been asking that for two years," Trump said of Putin. "They’re very heavily sanctioned. They don’t like that."