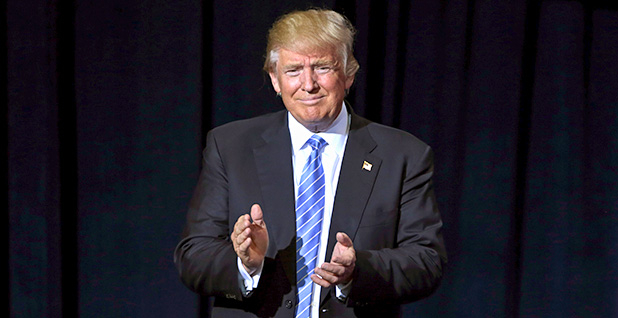 Reducing our dependence on foreign oil is a hallmark of U.S. energy policy. So it was a little perplexing that President Trump was encouraging major oil-producing nations to pump more crude to aid American drivers.

"The OPEC Monopoly must remember that gas prices are up & they are doing little to help. If anything, they are driving prices higher as the United States defends many of their members for very little $’s. This must be a two way street. REDUCE PRICING NOW!" Trump tweeted on July 4.

That’s a reversal from four years ago. The U.S. oil and gas industry feared that full-throttle production from OPEC would suffocate the shale gas boom. Global oil prices plummeted with foreign production, falling to between $20 and $30 per barrel after reaching more than $100 per barrel — a level that nourished the hydraulic fracturing bonanza.

The oil and gas industry has grown accustomed to Trump’s unpredictability. While energy firms embrace his administration’s efforts to slash regulations, they’ve bristled at his overtures on trade. His encouraging tweets to OPEC, a longtime enemy of the U.S. industry, fell into that latter reaction.

"I have to be truthful; it doesn’t sit well with me," said Kathleen Sgamma, president of the Western Energy Alliance.

"If your goal is energy dominance, increasing the world’s reliance on OPEC is not the natural path," added Dean Foreman, chief economist with the American Petroleum Institute.

Experts said there are several reasons for Trump’s recent lobbying of OPEC.

The market realities are different from when bargain-priced barrels of oil flooded the market. OPEC and Russia agreed in 2016 to rebalance the market. Supplies in Libya, Nigeria and Venezuela have tightened. Oil demand has grown.

Then there are the politics. Voters are sensitive to high gasoline prices, and those prices are rising as Republicans control the White House and Congress, and as the November midterms are closing in.

"Four years ago, pumping at max was considered market manipulation," said Sam Ori, executive director of the Energy Policy Institute at the University of Chicago. "It just shows that people like to say OPEC is manipulating the market, but sometimes they want them to."

Trump also said he wants to eliminate Iranian crude oil exports from the market. But his administration has sent mixed signals on whether it would offer waivers to countries that want to import Iranian crude. That activity falls under U.S. sanctions. Iranian exports account for about 2.5 million barrels a day, and if they’re eliminated, other countries would have to step in to provide that supply, or prices could rise. Trump tends to look toward Russia, Saudi Arabia and the rest of OPEC to fill the void.

But that could cause other problems. Pumping an additional 2 million barrels a day would strain Saudi Arabia’s capacity, said Sara Vakhshouri, an oil market analyst and president of SVB Energy International. Add another external shock to the market, and oil prices could soar. Iran’s threats to close the Strait of Hormuz, through which 17 million barrels of oil travels daily, represents that sort of instability.

Foreman noted that maintaining free-market trade policies could smooth supply disruptions. But Trump isn’t keen on that. He has threatened to dismantle the North American Free Trade Agreement. That could affect Canada and Mexico, both of which are significant buyers of U.S. energy. Also, pipeline constraints in the Permian Basin won’t be alleviated if U.S. tariffs make specialized steel inputs too costly, experts said.

There is one thing Trump could do to reduce U.S. reliance on foreign oil, according to analysts: promote electric vehicles.

But that’s unlikely to happen.

Wider deployment of electric cars could tamp down demand on oil and reduce greenhouse gas emissions. But even as Trump is asking OPEC to ramp up production to keep gas prices low, his administration is also trying to lower fuel economy standards. It also pushed to rescind unspent funding for federal loans to buoy alternative fuel vehicle manufacturing.

Past GOP administrations have supported basic research on materials science and alternative transportation, said Leslie Hayward, vice president of content and communications strategy with Securing America’s Future Energy. The fracking boom has changed the dynamics — the United States is now a major oil producer, churning out a record 10.6 million barrels per day — but she still thinks the message of reducing dependence on nations not traditionally aligned with U.S. values and promoting innovation could work with Trump.

"We’re asking foreign countries to assist us, and that’s happening because of the nature of this problem," she said.

"I think this President’s agenda of reducing our dependence on autocratic government oil is beyond clear. Dakota Access/Keystone XL, [Arctic National Wildlife Refuge], adios Paris agreement, expediting extraction permitting, potentially opening up most of the [outer continental shelf] for drilling," Paul Blair, director of strategic initiatives with Americans for Tax Reform, said in an email. "I often struggle to figure out what we’re not doing that we need to when it comes to advancing the America First Energy Agenda."

But oil is priced globally. Increased U.S. production has had an effect on moderating prices, but it likely can’t make a sizable dent on its own, which is why OPEC still holds considerable sway, said Frederick Lawrence, vice president of economics and international affairs with the Independent Petroleum Association of America. Trump’s comments about OPEC production rattled markets, as oil futures for a year out dropped 2 percent, said Foreman of API.

Prices are rising, though they’re still well below the $100 cost of a barrel seen earlier this decade. More recently, lower gas prices compelled the purchase of cars that consume more gasoline, like SUVs and crossovers.

Many of Trump’s supporters work in fuel-intensive industries and are more sensitive to gas price spikes, Lawrence said. But he predicted that the market will "cool down" after summer’s peak driving season. That could alleviate voter anxiety as fall elections roll around.

"My world doesn’t go on tweets," Lawrence said. "It goes on what the market fundamentals are and geopolitical factors."