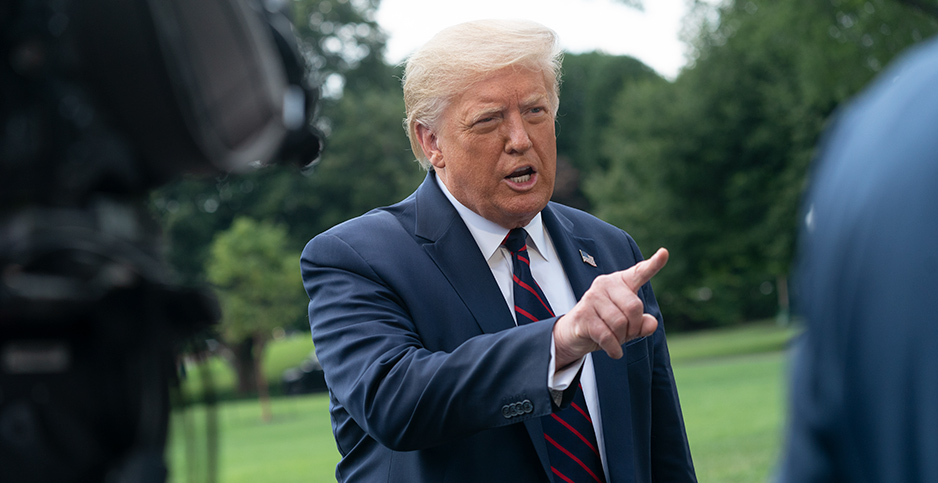 President Trump speaking to reporters at the White House on Monday. He travels to Texas today to promote fossil fuels ahead of the November election. Chris Kleponis/Pool via CNP/SplashNews/Newscom

President Trump will find a warm reception among Texas oil drillers today when he lauds his energy credentials and attacks his opponent’s climate policies at a crude-producing well.

But a segment of important voters are unlikely to be persuaded by Trump’s political performance at the oil rig: Republican-leaning women.

Trump is traveling to Texas to help halt a campaign tailspin that has pushed his support in the Lone Star State to levels so low that he’s in a near tie with Democrat Joe Biden, the former vice president. Trump is ahead by just two-tenths of a point, according to an averaging of polls by RealClearPolitics.

Trump’s focus on the Republican voting base — like oil workers — has helped erode his support among moderate women who polls show disapprove of his handling of the coronavirus pandemic. Democrats are trying to magnify that gap by emphasizing Trump’s rejection of climate science and Biden’s proposals to address rising temperatures.

Those issues are important to women who would ordinarily break for GOP candidates, said John Podesta, the longtime adviser to Democratic presidents.

"The swing vote in this election is pretty small, as it usually is, but in this one in particular, it’s people who tend to be Republican-leaning women," Podesta said. "They don’t like Trump, they don’t really like Biden, but they can be moved on this [climate] question."

Podesta added of Biden: "He’s viewed as much more solidly thinking about what the future looks like, making a place for young people."

Trump has been sending a message in swing states that Biden wants to take away fracking jobs and eliminate the oil and gas industry. Those claims promise to resonate in Texas.

Trump is expected to tour an oil rig in Midland and give remarks about supporting fossil fuels through his aggressive efforts to peel back regulations. Then he’ll head to a high-dollar fundraiser in Odessa, where some participants will pay $100,000 to dine with him.

The president has already locked in energy voters in Texas, including in the Odessa region of the Permian Basin, said Cal Jillson, a political science professor at Southern Methodist University in Dallas.

The pool of traditional swing voters is smaller than it used to be as political views have hardened and entrenched Texans on one side of the aisle or the other. In the middle are some suburban women, who are helping to accelerate the state’s tilt toward becoming a swing state rather than a GOP stronghold, Jillson said.

While climate is not going to be the deciding factor in the presidential race in Texas, Biden’s reputation as a moderate on energy policies, when compared with Democrats like Rep. Alexandria Ocasio-Cortez (D-N.Y.), might win over some Republicans who no longer feel they can support Trump, he said.

"It’s a bigger pool of people who have their head in their hands, their head between their knees, saying ‘oh, shit, what is happening,’ and suburban women are part of that," Jillson said.

"That is a new swing vote, that is a former Republican vote available to be convinced at this time and in the future that maybe voting Democrat is a reasonable thing to do, and Joe Biden is the ideal candidate to make people in transition like that feel comfortable," he added.

Biden held a 25-point lead over Trump among women, according to a Washington Post/ABC News poll released earlier this month. A Quinnipiac University poll found a similar lead of 28 points.

In 2016, Trump beat Hillary Clinton by 27 points among white women without a college degree, according to exit polls. In May, that edge shrunk to just 6 points in a Washington Post/ABC News poll.

Trump’s Texas visit comes days after Hurricane Hanna tore through the Rio Grande valley and caused widespread flooding and damage. About 60% of Texans are worried about global warming, and 67% fear that future generations will be harmed by rising temperatures, according to the Yale University Program on Climate Change Communication.

After largely ignoring the Green New Deal and environmental policy disputes with Democrats for the last few months, Trump has ramped up his attacks on Biden.

In recent weeks, he has said Biden’s promise to reenter the nonbinding Paris climate agreement would "destroy" the American economy. He has also said that Biden’s pledge to make buildings more energy efficient would mean "no windows." Earlier this month, Trump mocked energy-saving lightbulbs (Climatewire, July 15).

Sales of LED bulbs have boomed in recent years, and consumers are increasingly leaving behind less efficient lighting, he said, noting that efficient appliances have long been popular with the public because they save money and reduce pollution.

"Historically there has been nothing partisan about energy efficiency. It’s had bipartisan support until just recently, when the administration tried to rip up everything they can," Horowitz said.

Environmental groups are already spending millions of dollars on ads in other states where Trump was favored to win.

In Florida, considered a must-win for Trump, Biden is up by 7 points, according to the polling average from RealClearPolitics. It’s also a state where climate change has had a disproportionate effect and where extreme weather events have cost billions of dollars in damages in recent years.

The EDF Action Fund, connected to the Environmental Defense Fund, is spending almost $2 million on climate-related television ads in Florida. The most recent one features a clip of Trump saying global warming is a hoax and then contrasts that to statements from military leaders who say climate change poses national security risks.

"A hoax?" the ad states. "If Trump won’t listen to his own military leaders, then who will he listen to?"

One of the biggest gaps in how voters perceive Trump and Biden is on the environment. The Trump administration has rolled back more than 100 regulations and stifled climate science across multiple agencies.

Polling released earlier this month by Climate Power 2020, a group affiliated with Podesta, as well as Data for Progress and the Global Strategy Group shows that a pro-climate message could persuade center-right voters, younger voters, Latino voters and female voters to support a Democratic candidate.

Podesta said Democrats are eager to campaign against Trump on environmental issues in part because he exaggerates his claims. One example is the president’s assertions that hamburgers and airplane trips would be prohibited if Biden were elected.

Podesta likened Trump’s climate attacks to his distortion of COVID-19 research and the president’s erroneous claims that injecting disinfectant could kill the virus.

"I think the [Biden] campaign is happy to engage Trump on this and let him talk about buildings with no windows," Podesta said. "It’s the climate equivalent of drinking bleach."