Trump attacks Biden and buildings: ‘No windows, no nothing’ 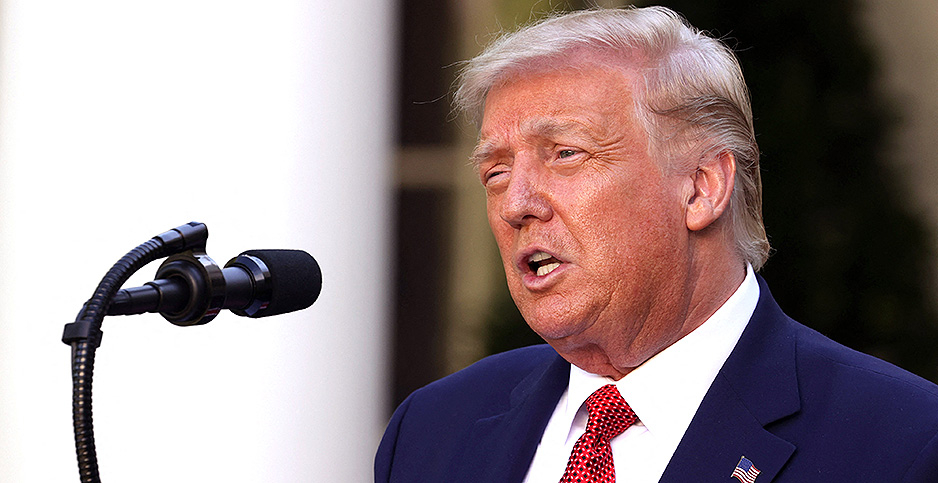 President Trump criticized the Paris climate agreement and other efforts to address rising temperatures in a press conference yesterday in the Rose Garden. Pool/ABACA/Newscom

President Trump said he was brave to withdraw from the Paris climate agreement and claimed that his likely presidential opponent, Joe Biden, would force millions of oil and gas workers out of work.

In a nearly hourlong speech in the Rose Garden yesterday evening, Trump said that the Paris Agreement would "destroy" the country. He said Biden’s plan to reenter the nonbinding accord, signed by virtually every nation, was designed to cripple the American economy.

"He wants to reenter the unfair, one-sided Paris climate accord, which will destroy us at the expense of many other nations who benefit. It was actually drawn in my opinion to take advantage of the United States just like so many other deals that are done to take advantage of the fools running the United States. This would do nothing for the environment, while crippling American industry."

Trump’s comments echo the political slogans of his 2016 campaign denouncing the global agreement designed to address rising temperatures. They also suggest that Trump will reprise the attacks he leveled at Hillary Clinton four years ago to try to damage Biden’s surging campaign.

"What I did there took a certain amount of courage," Trump said of his decision to sever the U.S. from a pact that has been rejected by just a few countries.

Three years ago, he announced he would begin the process of withdrawing from the accord, also in a speech from the Rose Garden, as he said that other nations were laughing at the U.S. for being a signatory.

He was at the time surrounded by leaders of the fossil fuel industry and heads of conservative groups that attack climate science. Last year, his administration began the formal process of withdrawing from the Paris Agreement. It’s scheduled to be completed Nov. 4, one day after the presidential election.

Trump’s comments yesterday came hours after Biden unveiled an aggressive $2 trillion climate plan that would expand clean energy and eliminate fossil fuels as an electricity source within 15 years. The plan would promote a transition to electric vehicles and upgrade millions of homes and buildings to be more energy-efficient (see related story).

Trump made a point to connect Biden to the progressive wing of the Democratic Party, mentioning Sen. Bernie Sanders (I-Vt.) and Rep. Alexandria Ocasio-Cortez (D-N.Y.)
.

Environmental issues are among Trump’s biggest shortcomings in the eyes of voters, according to polls, and he has struggled to weaken the former vice president’s standing as a candidate by attacking his support of the Green New Deal (Climatewire, June 11).

Trump has recently complained about energy-efficient dishwashers and clothes dryers as well as newer generations of water-saving showerheads and toilets. He repeatedly said that older appliances worked better.

Yesterday, he added air conditioning to that list, and he said Biden’s plan to increase the number of energy-efficient buildings would harm the vision of their occupants.

"That means no windows, no nothing, it’s very hard to do," Trump said. "I tell people when they go into some of these buildings, how are your eyes, because they won’t be good in five years; I hope you don’t mind cold office space in the winter and warm office space in the summer because your air conditioning is not the same as the good old days."