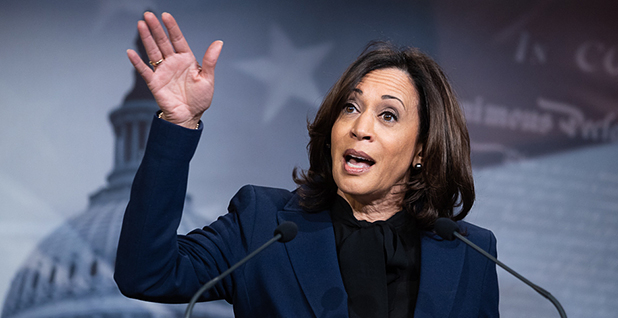 Presumptive Democratic presidential nominee Joe Biden’s vice presidential choice of Sen. Kamala Harris — who has vowed to take the fossil fuel industry to court over climate change and grounded her own run for the presidency on environmental justice — put energy squarely at the center of the presidential election yesterday.

Harris, one of the first senators to back the sweeping Green New Deal, quickly found her energy record under assault from President Trump, who criticized the California Democrat from the lectern at the White House.

"She is against fracking; she is against petroleum products," said Trump, who last week warned a crowd in Ohio that the "radical left-wing movement" wants to "ban fracking, which will demolish your state."

"I mean, how do you do that and go into Pennsylvania or Ohio or Oklahoma or the great state of Texas?" Trump said at the White House. "She’s against fracking. Fracking is a big deal."

Harris, who as California’s attorney general sued oil companies for environmental violations, has been critical of hydraulic fracturing and has gone further than Biden when it comes to support for ending the practice.

Harris told a CNN town hall in September 2019 that there was "no question" that she favored banning fracking, "starting with what we can do on day one around public lands."

Harris’ climate change plan released that month, however, did not call for a ban.

And former Vice President Biden, aware of support for the industry in key swing states such as Pennsylvania, has said he doesn’t support a complete fracking ban but would bar new permits for fossil fuel extraction on federal lands.

Still, as environmental groups welcomed Harris to the ticket, fossil fuel industry advocates accused Biden of caving to the left flank of the Democratic Party.

"Joe Biden has chosen a running mate who is even less connected to working-class Americans and whose energy platform is even more out of touch than his own," said Thomas Pyle, who led Trump’s Department of Energy transition and is president of the American Energy Alliance. "Now that his VP choice has been made, it is abundantly clear which ticket is looking out for working-class Americans and which ticket would prefer to outsource America’s energy security to China."

On a Trump campaign conference call with reporters, Sen. Marsha Blackburn (R-Tenn.) warned that Harris’ support for the Green New Deal would cost Americans jobs and "would take away their cars and even their red meat."

Environmentalists said that the selection of Harris puts climate change as a priority for the Biden campaign.

EDF Action, the advocacy wing of the Environmental Defense Fund, noted that Harris as a senator has co-sponsored legislation to strengthen pipeline safety and reduce methane leaks.

‘Let’s take them to court’

As a presidential candidate, Harris said on the campaign trail that as California’s attorney general, she defended some of the country’s strongest environmental laws and took polluters to court. At a CNN town hall on climate change last September, she vowed to take on Big Oil when it profits "off of harmful behaviors" such as burning fossil fuels.

"It’s not about debating the science. It’s about taking on powerful interests," Harris said. "Let’s take them to court."

Her campaign said she had taken Chevron Corp., BP PLC, ConocoPhillips and Phillips 66 Co. to court for various pollution infractions, and had secured $50 million in settlements. She said at the time that she had sued Exxon, but no evidence emerged that she had — though she had opened an investigation into the oil giant over claims it was lying about climate change.

Dan Eberhart, a Republican donor and CEO of Colorado-based Canary LLC, a private oil field service company, said Harris has a "distorted view of capitalism that is intervention" and predicted it would "result in more conflicts with energy producers who don’t produce the right type of energy — according to Harris."

The Western Energy Alliance, which represents various natural gas and oil companies and suppliers, charged that Harris won’t help Biden with states such as Pennsylvania.

"He’s already had to dial back some of his anti-fracking rhetoric to try to win over blue-collar workers in a state revitalized with natural gas manufacturing jobs, and a VP pick who’s called for a ban on fracking isn’t going to be any more convincing," said WEA President Kathleen Sgamma. "He remains vulnerable with blue-collar workers in general and in energy states in particular."

Still, a CBS poll this week in Pennsylvania shows Biden leading Trump by 6 percentage points, amid widespread concerns over Trump’s handling of the coronavirus pandemic.

The poll also shows voters in the state evenly split on fracking, largely along party lines. The poll found that Biden and Trump run nearly even when voters are asked who would do a better job on oil and gas exploration, including fracking: 45% of respondents said Trump, and 42% said Biden.

Harris, who is Black and Indian American, made environmental justice a focal point of her own campaign for president, something she’s continued after leaving the race. Last week, as Biden was making his decision, Harris and Rep. Alexandria Ocasio-Cortez (D-N.Y.) introduced legislation to create an Office of Climate and Environmental Justice Accountability at the White House (E&E Daily, Aug. 7).

"The environment we live in cannot be disentangled from the rest of our lives, and it is more important than ever that we work toward a more just and equitable future," Harris said.