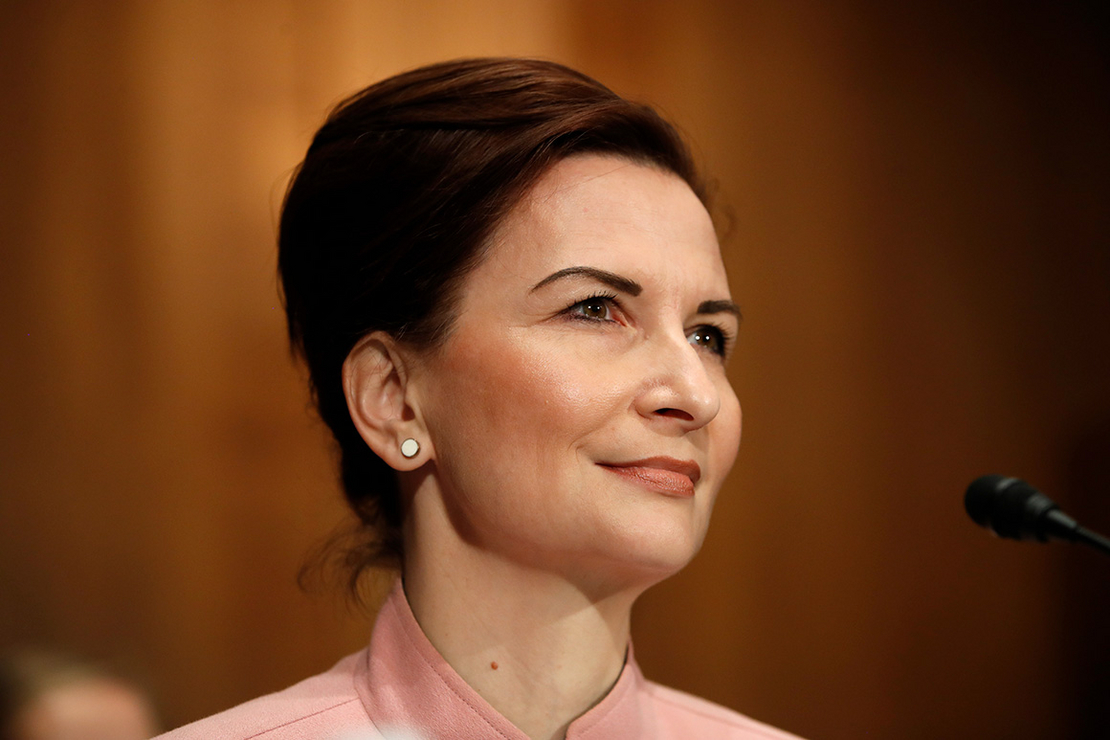 Jelena McWilliams, chair of the Federal Deposit Insurance Corp., announced that she will resign next month. She was appointed by former President Trump. AP Photo/Jacquelyn Martin

A top banking regulator appointed by President Trump announced her resignation last week in a move that could give Democrats more control to address the financial threats of climate change.

Jelena McWilliams, the chair of the Federal Deposit Insurance Corp., said Friday she would step down from her post in February. The FDIC is governed by a five-member board and is responsible for supervising thousands of small banks, managing bank failures, insuring bank deposits and more.

McWilliams’ departure could clear the way for the agency and other regulators to move “much more forcefully" on climate specifically, said Todd Phillips, a former FDIC attorney who currently works at the left-leaning Center for American Progress.

“The thing that was stopping the FDIC from moving on climate action was Chairman McWilliams’ decision not to do anything,” he added.

Perhaps the clearest example of McWilliams’ resistance came in October 2021 when a council of top financial regulators declared for the first time that global warming is a potentially systemic financial risk.

McWilliams, who has headed the FDIC since 2018, was the only member of the Financial Stability Oversight Council to abstain from voting for the report. She acknowledged that global warming threatens society but raised concerns that the council didn’t have enough time to complete the document or “thoroughly evaluate” its potential impact (Climatewire, Oct. 22, 2021).

“That alone was very different from everyone else,” said Sarah Dougherty, a former researcher at the Federal Reserve Bank of Atlanta who currently works at the Natural Resources Defense Council.

The FDIC declined to comment. But a spokesperson did share a speech by McWilliams in which she emphasized that the FDIC has long required financial institutions to address potential climate risks and in 2020 “incorporated climate change research as a corporate goal.” She stopped short of saying the agency should take a more aggressive approach as temperatures rise.

That marks a departure from McWilliams’ peers. Officials at the Securities and Exchange Commission, Office of the Comptroller of the Currency, and Federal Reserve have all intensified their focus on the issue over the last year by appointing climate specialists, drafting guidance and more.

Climate advocates argued McWilliams’ resignation could allow the three Democrats on the FDIC board, as well as the heads of other agencies, to move more quickly on environmental regulation.

The FDIC, OCC and Federal Reserve often “move in tandem, so they issue the same regulations in the same document even when they don’t have to just because generally we want financial institutions to be regulated the same regardless of who their regulator is,” said Phillips of the Center for American Progress.

Dougherty of NRDC said McWilliams’ departure could mean the FDIC is more likely to join OCC’s early efforts to provide major banks with guidance about how to mitigate climate threats. The Fed, for its part, has already signaled it might move in that direction.

The “odds are much better of the same happening at the FDIC now,” Dougherty said.

McWilliams, the sole Republican, disagreed and declined to recognize their vote. She later called the move a “hostile takeover” in a Wall Street Journal op-ed. But she didn’t note the discord in her resignation letter to President Biden.

“Throughout my tenure, the agency has focused on its fundamental mission to maintain and instill confidence in our banking system while at the same time promoting innovation, strengthening financial inclusion, improving transparency, and supporting community banks and minority depository institutions, including through the creation of the Mission Driven Bank Fund,” McWilliams wrote.

“Today, banks continue to maintain robust capital and liquidity levels to support lending and protect against potential losses,” she added.