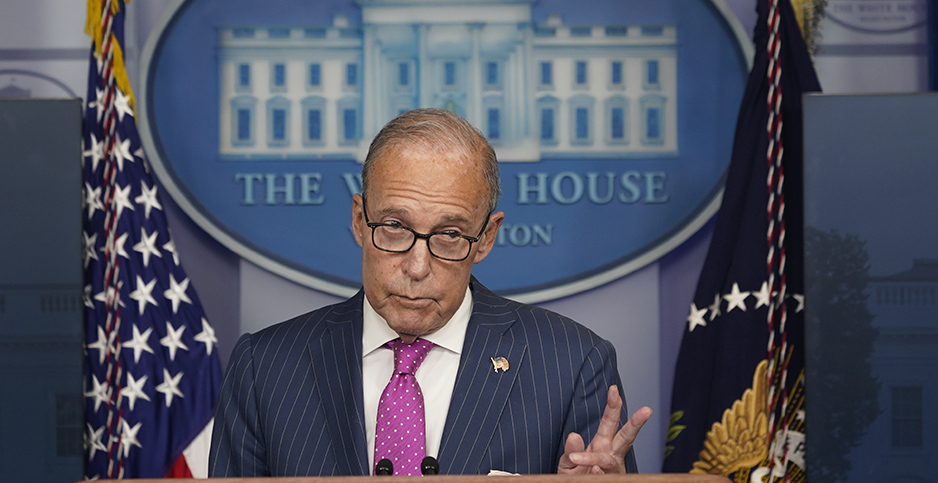 Trump White House economic adviser Larry Kudlow used a Department of Energy summit yesterday to lambaste what he called the "other team" for "bizarre plans" he said would do "great harm" to the U.S. energy industry.

"I don’t want to politicize this, but the other team has some bizarre plans that would do great harm to energy and the economy," Kudlow charged, insisting President Trump, by contrast, "if he’s given the opportunity for a second term," would continue to pursue low taxes and deregulatory policies.

Trump has repeatedly accused former Vice President Biden of looking to ban all hydraulic fracturing, although Biden’s energy platform calls for an end to new oil and gas leasing on public land and water, not a total moratorium. Most drilling is done on private land.

Many progressives want to wholly ban fracking, but Biden told a Pennsylvania voter at a CNN town hall yesterday that he wouldn’t eliminate the practice, noting its importance to the key swing state.

"Fracking has to continue because we need a transition," Biden said as host Anderson Cooper suggested he was "trying to have it both ways" by taking a stance politically popular in Pennsylvania and Ohio even as he pledges to tackle climate change.

Trump’s campaign accused Biden of hiding his intent to wipe out the industry.

"He managed to obfuscate on fracking by claiming he’d support the natural gas industry just long enough to kill it," Trump’s communications director Tim Murtaugh said in a statement. "This was classic Joe Biden: untethered to the facts, his own record or reality."

Yesterday at DOE’s 2020 Natural Gas Summit, Kudlow charged that "people on the other team want to end fracking, want to end fossil fuels in a few years."

He hailed the fracking industry for being at "the cutting edge" and pledged "POTUS is going to protect that."

Kudlow’s touting of Trump’s support for fossil fuels came as Trump this week downplayed the evidence that climate change is increasing the risk of wildfires that have ravaged California and the Northwest. Kudlow repeatedly expressed bewilderment at why environmentalists are pressing to reduce the use of fossil fuels.

At a virtual fundraiser yesterday in Colorado with former Interior Secretary Ken Salazar, Biden talked about the environmental damage from the fires as well as the economic impact and criticized Trump for dismissing climate change.

"When Trump thinks of climate change, he can barely muster one word," Biden said. "He calls it a hoax. I think of one word, too: jobs."

A spokesperson for the Biden campaign did not respond to a request for comment about Kudlow’s remarks at yesterday’s summit.

Amid the background of wildfires and the pandemic, Davis said in a statement that "the Trump administration is having a self-congratulatory summit with oil and gas executives instead of stepping up the much-needed government response and relief to the tens of millions of people suffering because of their science denial and pollution."

Kudlow’s opening yesterday led the way for a chorus of criticism from summit participants, seemingly aimed at Democrats and environmental groups who are pushing for an end to the use of fossil fuels.

Energy Secretary Dan Brouillette stayed clear of the politics, noting only that the natural gas boom in the U.S. is "providing this president and any future president who chooses to wrap their arms around this important industry with foreign policy options that many presidents have not had in the last four to five decades."

But activists, he said, have increasingly stood in the way of industry progress.

"What they’ve figured out, Director Kudlow, is they can’t beat us on the supply side, and they can’t beat us on the demand side," Sommers said. "The world is going to continue to demand these products, so what they do is they … step on the hose in the middle and stop this country from building the infrastructure that it needs to continue to grow."

"Did you rehearse that before you came in?" Kudlow asked.

Richard Weber, chairman and CEO of PennEnergy Resources LLC, said there are groups "ideologically opposed to the concept of any fossil fuel development" that have figured out the way to "really stick it to us" is by opposing infrastructure development.

Weber pointed to billions of dollars sunk into the now-defunct Atlantic Coast project and raised concerns about the future of the 300-mile Mountain Valley pipeline project, which is designed to transport gas from West Virginia into Virginia.

"They gave up, they gave up," Weber said, referring to Dominion Energy Inc. and Duke Energy Corp. "And we have another one, the Mountain Valley pipeline, led by Equitrans, which I also think is at risk right now due to opposition in the courts led by four or five very well-funded, very left-wing environmental groups.

"So-called environmental groups, because I think if you really cared about the environment, you would embrace natural gas," he added.

Although developers of Mountain Valley have asked federal regulators for an extra two years to complete the pipeline as a precaution, the project recently received a favorable report from the Fish and Wildlife Service, and a project spokesperson said the plan is to finish it early next year (Energywire, Sept. 8).

Sherman Knight, president and chief commercial officer with Competitive Power Ventures, an electric power generation development company, said in a phone interview after the summit that it was helpful to convene industry leaders, but less so to veer into politics.

"My preference is always to try and stay away from the politics of determining ‘whose team, what team,’" Knight said. "Ultimately, we’re all on one team, we’re trying to make the right decisions for the future energy needs of the country, as well as the environment and the climate."

He called natural gas a "required resource" as renewables are increasingly used, but he said natural gas has a "negative public perception" that needs to be addressed.

"We can talk about just trying to override it, but I don’t think that’s the right thing to do," he said. "It’s important for the industry, regulators and, for that matter, consumers to address the issues head-on and not just try and override someone’s voice."

Brouillette told CNBC ahead of the summit that it was "no secret" that the industry has been hammered by the pandemic — "it’s been a fairly dramatic decline," he said.

But he insisted there is "excitement" coming for the industry "just around the corner, post-pandemic," and said the demand for natural gas continues to increase at a rate he said was "astounding."

He said U.S. exports will supply one-fifth of the global demand for natural gas in 2020, setting a new record.

He noted the Jordan Cove and Alaska export facilities would allow the U.S. to better serve Asian markets. But Jordan Cove faces a number of hurdles (Energywire, Sept. 9).

Brouillette didn’t say whether he believes Jordan Cove will ever get built.

The project — an 807-mile, $38 billion natural gas pipeline — will be "one of the largest and most complex infrastructure projects" in modern history, according to a press release from the federal agency known as the Federal Permitting Improvement Steering Council.

The council, which was established to ease robust environmental analysis for energy and infrastructure projects, helped the developer coordinate and finalize 70 permits across 19 agencies in less than three years, the release said.

Critics have charged that the council sidesteps necessary environmental review to boost infrastructure.

But Rep. Don Young (R-Alaska) said in a statement Wednesday that the authorization is "a critical step toward responsibly exporting LNG to help power America and to provide good-paying jobs right here in Alaska."

"These permits bring us closer to unleashing North Slope natural gas — for the benefit of all Alaskans, our nation’s energy security, and that of our critical allies in the Asia-Pacific," Sullivan said in a statement.

However, Kristen Monsell, a senior attorney at the Center for Biological Diversity, called the project "a massively terrible idea" that will harm countless species and cause more Arctic drilling and fracking.

"FERC and other agencies failed to properly consider the numerous harms inherent in the project as required by law," Monsell said in an email. "Bragging about how quickly they approved what they admit is one of the largest and most complex infrastructure projects in modern history only shows how they flouted the law to promote a fossil fuel agenda."

He told CNBC in 2018 that the administration was hoping to include energy projects in an oft-touted but never realized infrastructure package.

"I’d like to do anything that will help LNG, terminals, shipping," he said. "We’d like to export oil, natural gas to Europe and to Asia."