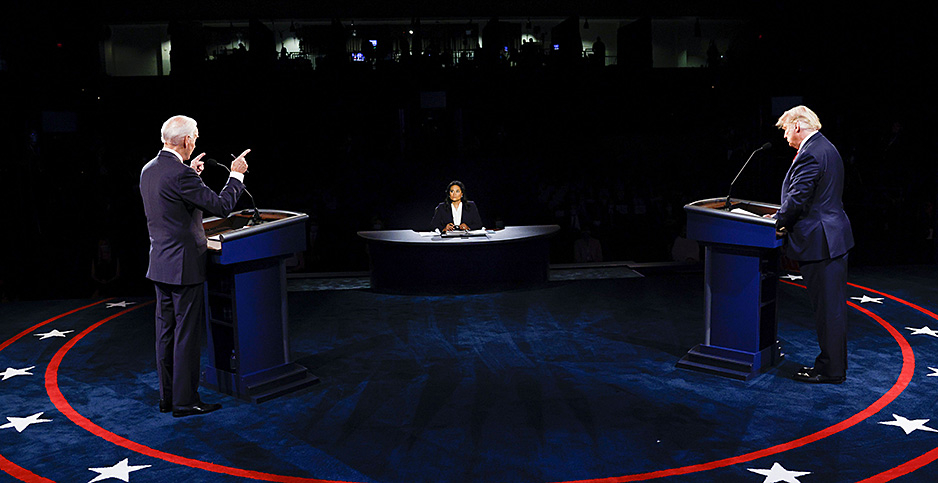 President Trump and Democratic presidential nominee Joe Biden sparred over energy last night in a feisty debate that showed deep divisions over the future of fossil fuels, the worthiness of wind power and oil refineries’ legacy of polluting poor neighborhoods.

The fiercest exchange came as Biden said he’d phase out fossil fuels and Trump moved in, declaring it would cost jobs in the oil industry.

"I would transition from the oil industry, yes," said Biden, who has proposed a $1.7 trillion plan to tackle climate change that calls for a 100% clean energy economy and net-zero emissions no later than 2050.

"That is a big statement. The oil industry pollutes, significantly," Biden said. "But here’s the deal, it has to be replaced by renewable energy, over time."

Trump — who has sought to hammer Biden on inconsistencies over whether the former vice president supports hydraulic fracturing to produce natural gas — pounced.

Biden shot back: "He takes everything out of context, but the point is, look, we have to move toward net-zero emissions. The first place to do that by the year 2035 is in energy production. By 2050, totally."

But at least two Democrats sought to distance themselves from Biden’s remarks, illustrating the fine line Biden has walked in some areas of the country, even as environmental activists and much of the Democratic Party champion an even faster transition off fossil fuels.

Democratic Rep. Xochitl Torres Small of New Mexico, defending her seat in swing district in an oil-producing region, tweeted that she disagreed with Biden’s remarks, calling them "out of touch with the reality on the ground."

I disagree with VP Biden’s statement tonight. Energy is part of the backbone of New Mexico’s economy. We need to work together to promote responsible energy production and stop climate change, not demonize a single industry. 1/2

And Rep. Kendra Horn (D-Okla.), who is also in a tight race in an energy-rich district, said she disagreed with Biden, writing on Twitter that "we must stand up for our oil and gas industry."

Trump’s campaign seized on Biden’s remarks in a post-debate call with reporters, noting Trump had pushed him on it.

"Biden once again accidentally told the truth tonight," said campaign spokesman Tim Murtaugh. "He is an opponent, an enemy of the fossil fuel industries and the millions of millions of Americans who work in those industries."

Trump also tweeted a video montage of Biden’s past remarks critical of fracking and fossil fuels.

Environmentalists have pressed Biden to end fracking, but he sought to clarify his remarks on ending fossil fuels after the debate, telling reporters that workers in the oil and gas industry wouldn’t be out of work — and that fossil fuels are likely to be used for the next 30 years.

"We’re not getting rid of fossil fuels for a long time," Biden said, adding, "They’re not going to lose their jobs. … There are a lot more jobs that are going to be created in other alternatives."

Still, Trump’s embrace of the industry poses a risk for him to win moderates and independents, who are increasingly worried about climate change and calling for efforts to reduce emissions.

The exchange during the debate came as moderator Kristen Welker asked Trump why people of color, who are more likely to live near oil refineries and chemical plants, should vote for him when his administration has rolled back environmental regulations that could protect them.

Trump said he wasn’t familiar with the "statistics that you’re saying," but he insisted that people living near refineries are employed by the industry and "making more money than they’ve ever made."

Biden noted Trump didn’t understand the issue and referred to an Obama-era regulation that required refineries to monitor emissions around their fence lines.

"They live near … chemical plants and oil plants and refineries that pollute," Biden said. "The fact is, in those frontline communities, it doesn’t matter what you’re paying them. It matters how you keep them safe. What do you do? And you impose restrictions on the pollutants."

Biden added that he’d end subsidies to the oil industry and charged that Trump has resisted similar assistance to solar and wind.

Biden argued that the fastest-growing industry in America is the renewable energy industry, mocking Trump’s longstanding antipathy to wind turbines.

Trump shot back that the U.S. is "energy independent for the first time" — although it still imports foreign oil.

And Trump charged, "I know more about wind than you do," prompting giggles from the audience at Belmont University in Nashville, Tenn., which had otherwise remained nearly silent for the 90-minute debate.

"It’s extremely expensive, kills all the birds," said Trump, who last year had to pay the Scottish government nearly $290,000 after losing a legal battle to stop wind turbines from being built in the North Sea near a Trump-owned golf course (Energywire, Nov. 14, 2019).

He charged that most wind turbines are made in Germany and China and that the production causes pollution.

"If you’re a believer in carbon emission, the fumes coming up to make these massive windmills is more than anything that we’re talking about natural gas," he said.

"Find me a scientist who said that," Biden interjected.

Trump did allow that he loves solar. But he said the technology wasn’t yet powerful enough "to really run our big beautiful factories that we need to compete with the world."

Biden said his climate plan has been embraced by environmental groups and unions "because they know the future lies in us being able to breathe." And he said it would involve 50,000 charging stations for electric cars and retrofitting buildings for energy efficiency. (Biden’s written plan calls for adding 500,000 such stations.)

Trump assailed the plan for being too expensive and said it would result in buildings without any windows.

"They want to take buildings down because they want to make bigger windows into smaller windows," Trump said. "As far as they’re concerned, if you had no windows it would be a lovely thing."

Net-zero-emissions buildings, which produce as much energy as they use or more, include windows. Often many of them (Energywire, July 20).

The back and forth on energy came as the two tangled over climate change, with Trump defending his move to pull out of the Paris climate accord as too costly but insisted he loves the environment and wants clean air and water.

Biden labeled global warming "an existential threat to humanity" but pledged that his plan to tackle it would create jobs.

The two also clashed over fracking, which Trump has made a central plank of his campaign, charging that Biden’s plans to tackle climate change would put workers in energy-rich swing states like Pennsylvania and Ohio of work.

Trump was so eager to bash Biden on the issue that he raised it early in the debate when the two were tussling over health care.

"We need other industries to transition to get to ultimately a complete zero emissions by 2035," he said, pledging instead to capture emissions from fracking.

Pennsylvania’s 20 electoral college votes make it one of the most valuable prizes of battleground states that proved critical to Trump’s 2016 win. He won the Keystone State then by fewer than 45,000 votes, and this year, both campaigns have spent considerable time and money there.

Polls, though, have consistently given Biden an edge in Pennsylvania.

But critics said the report undermines Trump’s rhetoric on the campaign trail, noting that he’s told campaign audiences that a Biden fracking ban would cost the state nearly 1 million jobs.

"The real truth about fracking is that it has never been the jobs engine that its backers claim, and it cannot be part of any climate plan that seeks to preserve a livable future," said Food & Water Action policy director Mitch Jones.

Biden has stopped short of calling for a ban on hydraulic fracturing — though he would oppose new drilling on federal land. He has at times muddled his message, telling an attendee at a September 2019 campaign event, "We’re going to end fossil fuel."

Biden said at a CNN town hall last month that fracking "has to continue because we need a transition" to cleaner forms of energy.

Trump on Tuesday night in Pennsylvania played a video of Biden and his running mate, Sen. Kamala Harris (D-Calif.), speaking against fracking, calling the montage of clips an "original Donald Trump Broadway play."

"To all the people of Pennsylvania, hear this warning," Trump said as the video ended. "If Biden’s elected, he will wipe out your energy industry."

A Suffolk University/USA Today poll conducted Oct. 15-19 shows Biden leading Trump 49% to 42% in the state. However, the poll also found that fewer than 40% of respondents believed Trump when it came to Biden’s stance on fracking.

"Trump is trying to turn the election into a referendum on fracking versus clean energy and bold action on climate, which is a fight Democrats are happy to have because clean energy and climate are key issues for voters in Pennsylvania and across the country," said Lori Lodes, executive director of Climate Power 2020.

Trump supporter Dan Eberhart, who owns the oil field services company Canary LLC, argued in a Forbes column yesterday that a ban on fracking on federal land would tightly limit exploration and production growth. And he claimed that a federal ban would actually set back efforts to address climate change, noting carbon has declined because of the increased use of natural gas as a replacement for coal.

Former President Obama made his campaign debut for Biden on Wednesday in Philadelphia, telling a rally there that Trump’s mishandling of the coronavirus pandemic will make him the first president since Herbert Hoover to lose jobs.

By contrast, Obama said, "Joe’s got a plan to create 10 million good, clean energy jobs as part of a historic $2 trillion investment to fight climate change."

Without prompting, Pence repeatedly argued that Harris wants to ban fracking and enact the sweeping Green New Deal to address climate change. Harris supported both as a candidate but has now embraced Biden’s platform.

"They want to abolish fossil fuels and ban fracking, which would cost hundreds of thousands of American jobs all across the heartland," Pence charged.