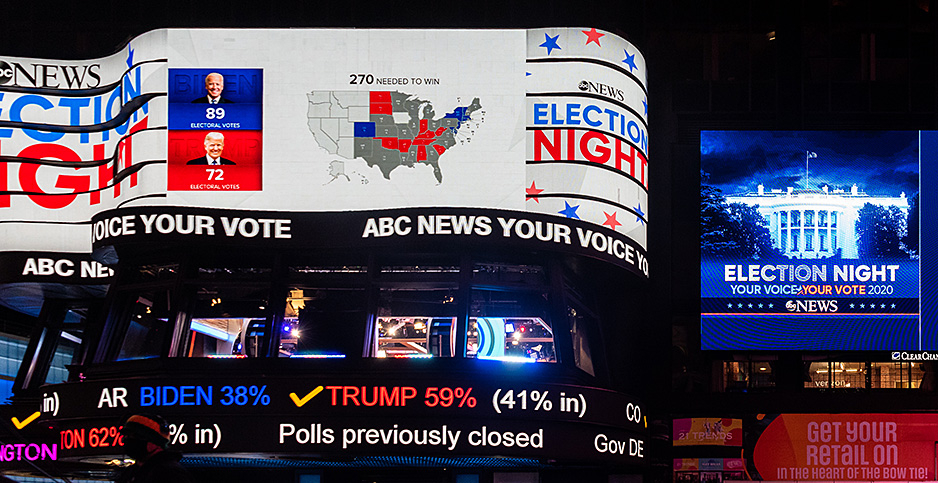 ABC's election night billboard is shown in Times Square in New York City yesterday evening. The outcome of the race is still unclear as hundreds of thousands of votes have yet to be counted nationwide. Gabriele Holtermann-Gorden/Sipa/Newscom

There was no declared winner in a bitterly divided presidential contest early today, as vote tallies were still out for a number of pivotal states, including Pennsylvania — where energy played a critical role in the closing days of the campaign.

President Trump declared victory for himself early this morning over rival Joe Biden, but millions of votes had yet to be counted in a number of key swing states that could decide the contest.

"Millions and millions of people voted for us tonight and a very sad group of people is trying to disenfranchise that group of people and we won’t stand for it," Trump said from the East Room at the White House, surrounded by supporters.

Trump, who notched early victories in several battleground Southern states, called the situation a "fraud on the American public" and vowed to go to the Supreme Court to stop voting. But a surge of absentee ballots had yet to be counted in key swing states including Wisconsin, Michigan, Arizona, Georgia and Pennsylvania, which Trump won by less than a percentage point in 2016. Of the remaining states, Pennsylvania is the largest prize, with 20 electoral college votes.

Biden appeared in Delaware several hours earlier, telling a crowd in Wilmington that he believes "we are on track to win this election" but calling for patience as an unprecedented number of absentee ballots are counted.

"The American people decide the outcome of this election. And the democratic process must and will continue until its conclusion," she said.

Both campaigns put a major focus on energy issues in the closing weeks, particularly in Pennsylvania. Trump in the closing days of the campaign repeatedly falsely accused Biden of looking to ban hydraulic fracturing for oil and gas, posing a threat to the state’s economy.

Biden insisted that he would ban only new fracking on public land and championed a plan to tackle climate change by transitioning to renewable forms of energy that he said would create jobs.

Analysts said the race between the two presents the starkest divisions on energy issues in recent memory, with Trump discounting climate change and pledging continued efforts to promote U.S. oil and gas development. Biden, by contrast, has called global warming an "existential threat" and is pushing to move away from emission-producing fossil fuels into green energy.

Environmental groups have hailed Biden’s plan as the strongest Democratic effort to address climate change and called for time to count the ballots.

"Though there are plenty of votes left to count, the differences between the two presidential candidates could not have greater consequences for our country and for the future of our planet," said Shaughnessy Naughton, president and founder of 314 Action, which seeks to elect scientists to office. "While Joe Biden has laid out policy plans and commitments that are rooted in facts and evidence, Donald Trump has waged an all-out war on science over the last four years."

Trump is unlikely to put much focus on efforts to address global warming, with the U.S. poised to leave the Paris climate accord today.

He noted Biden had secured more popular votes than Trump, adding "we urge everyone to keep fighting to protect democracy and ensure that the wishes of the American people are respected."

Hanging in the balance for the oil industry is a weighty difference between continuing Trump’s "Drill, Baby, Drill" policies or pivoting to a transition away from fossil fuels.

Trump’s biggest talking point on energy has been that the U.S. has become flush with oil and gas under his presidency and that he doesn’t want to "ban fracking." Biden doesn’t either, entirely, but he is offering some of the most oil-hostile policies of a major party nominee.

"Biden’s track record on energy should scare anyone that cares about the country and its future. It is a disaster," oil billionaire Harold Hamm wrote in an opinion piece in the National Review last month.

Trump seized on Biden’s remarks at the final presidential debate that he would "transition from the oil industry" to repeatedly hammer him. Two Democrats who had sought to distance themselves from Biden’s remarks, Rep. Xochitl Torres Small (D-N.M.), and Rep. Kendra Horn (D-Okla.), lost their tight races in oil-producing states, giving House Republicans valuable pickups.

Biden wants to end new drilling on federal public lands, a major departure from Democratic administrations of the past, including Barack Obama.

And Trump zeroed in on Biden’s stance, with analysts suggesting that the fracking boom that brought jobs to Pennsylvania could be a motivating factor for a number of voters in a close race.

Biden has said he wants to block the Keystone XL oil pipeline, and some of his supporters would likely press him to shut down the Dakota Access pipeline that generated large-scale protests in 2016.

But even if Trump wins, the oil industry still faces a demand slump driven by the coronavirus pandemic.

Bjørnar Tonhaugen, head of oil markets at the analytical firm Rystad Energy, noted energy markets have lifted ahead of the election and the final result could have an effect on prices.

"A Trump victory — in contrast to a Biden one — could help price levels keep gains more easily," Tonhaugen said. "A Biden win could also mean — at some point — a boost in demand and in turn, prices, but also carries a supply risk, which could flip the positive effect."

He noted that Biden’s approach to foreign relations could result in more supply to the market, "thus a conservative oil-friendly Trump win could be the most bullish immediate outcome for oil."

Biden could ease relations with Iran and Venezuela, Tonhaugen said, "which in turn could unleash 2+ million barrels per day of oil to the market as early as 2021."

Still, overall, he said Rystad expects the election to be "a sigh of relief, after which the oil market will reorient itself to the larger structural macro weakening and the increasing likelihood of a second, yet milder, wave of COVID-19 oil demand destruction."