Trump: BLM leaders should live ‘in the great American West’ 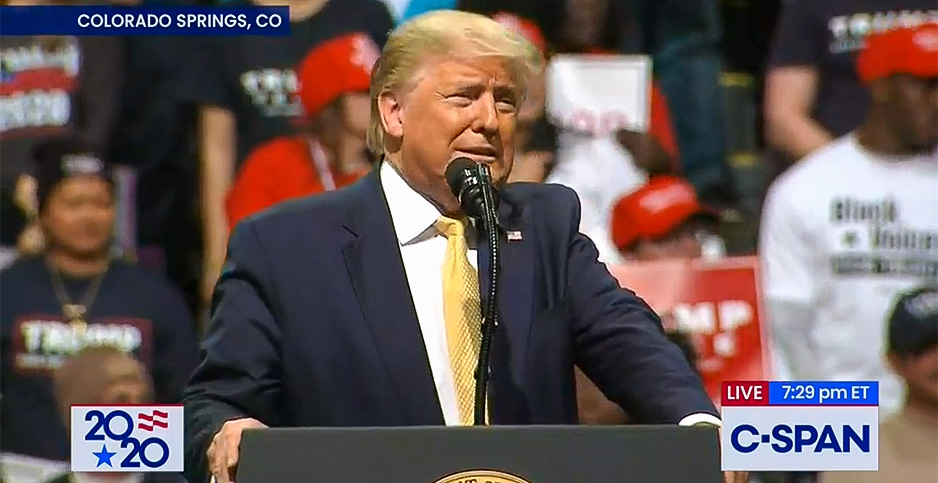 President Trump told a boisterous crowd at a campaign rally in Colorado yesterday that moving the Bureau of Land Management’s headquarters out West is part of his "historic regulatory reduction campaign" aimed at "ending the tyranny of Washington bureaucrats."

"We repealed the ridiculous Waters of the United States rule, which was basically taking away your property," Trump said during the rally in Colorado Springs, Colo. "And we are taking the Bureau of Land Management out of Washington, D.C.; we’ve just done it."

Trump — with Interior Secretary David Bernhardt nearby and flanked by Colorado Republican Reps. Ken Buck, Doug Lamborn and Scott Tipton — told the crowd of supporters that moving BLM headquarters to Grand Junction, Colo., is justified "because we believe that the people who manage the lands of the great American West should live right here in the great American West."

BLM’s move played a small part in Trump’s two-hour speech, which was broadcast live by C-SPAN. The president is on a three-state campaign rally tour that wraps up today in Las Vegas — a day before Nevada’s Democratic caucus.

But his comments were noteworthy because Trump has rarely, if ever, publicly discussed his administration’s reasoning behind relocating BLM’s headquarters to Colorado, along with more than 200 other D.C.-based positions to state offices across the West.

Trump’s comments came as congressional Democrats have ramped up scrutiny of the BLM move.

The House Natural Resources Committee last week granted Chairman Raúl Grijalva (D-Ariz.) authority to subpoena documents and testimony from the Interior Department and other federal agencies — in part due to frustration over obtaining information related to BLM’s move (Greenwire, Feb. 12).

Ed Shepard, president of the Public Lands Foundation, a BLM retirees group, responded to Trump’s comments by noting that 97% of BLM’s nearly 10,000 employees already live and work in the West.

Shepard, who retired in 2012 after a 38-year career at BLM, said, "Moving a few hundred employees out of Washington, D.C., will not improve service to the American people that own the land, and will make it more difficult to work with other agencies and stakeholders" based in Washington.

Bernhardt ‘gets it done’

Trump wasn’t the only one talking about the BLM move.

Sen. Cory Gardner (R-Colo.), who has used the BLM move as a key selling point in his reelection campaign, riled up the crowd just before Trump’s speech by thanking the president for working with him to make the BLM move a reality.

Trump, Gardner said, worked with him on the BLM move; President Obama, he said, did not.

And about an hour into Trump’s speech, the president invited Gardner to join him on stage.

"Mr. President, you’ve done so much good for Colorado. As a result of your work, the Bureau of Land Management is now headquartered in the great state of Colorado," Gardner said to thunderous applause.

Gardner, whose reelection bid is expected to be among the most competitive, has said that he’s the "chief architect" behind the BLM move to Grand Junction (Greenwire, Dec. 20, 2019). He is banking that the relocation, and the government jobs it brings to the state, will help him win a second term in November.

"Cory is a champion for the people of Colorado. He loves your state," Trump said. "He’s got my complete and total support and endorsement. He will never let you down."

Trump also praised Bernhardt — a Colorado native — calling him "the largest landlord by a factor of about 2,000."

He then shifted back to BLM.

"When you work with him, he’s beautiful because he gets it done," Trump said of Bernhardt. "And you’re moving it and its headquarters to Grand Junction, Colo."