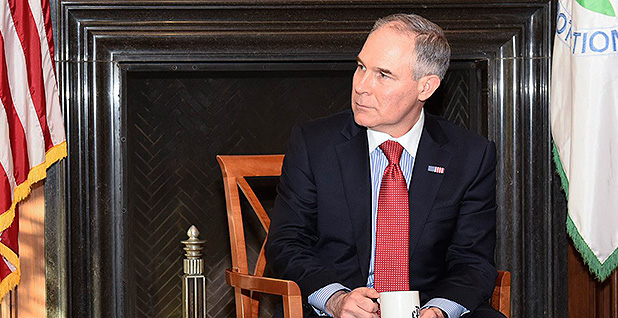 EPA Administrator Scott Pruitt will help decide which agency programs to scale back under looming budget cuts. Photo courtesy of @EPAScottPruitt via Twitter.

U.S. EPA staff and environmentalists have been bracing for big cuts to the agency’s budget under the Trump administration, but a plan to slash funding by almost a quarter was even more than some expected.

The budget outline sent to the agency yesterday by the Trump White House asked for a 24 percent overall cut to EPA’s budget, a source informed about the administration’s plan told E&E News. The EPA outline, the source said, would trim nearly $2 billion from EPA’s current budget of about $8.1 billion (E&E News PM, Feb. 27).

Joe Edgell, another EPA union leader, said today, "People are nervous here, and this certainly doesn’t cause people to be less nervous."

The White House plans sent out to federal agencies yesterday are just the opening salvo in what promises to be a lengthy negotiation over the upcoming fiscal year’s budget. Agencies will weigh in on the White House’s plans, and the funding details will be hashed out with Congress during the appropriations process.

But EPA employees and greens say cuts that steep would take a major toll.

"It would be like taking a meat ax to the agency," said Frank O’Donnell, president of the advocacy group Clean Air Watch. "Enforcement would drop, new rules would stop, companies could be emboldened to cheat more, like Volkswagen did — and public health could only suffer. And a lot of state governments will start screaming if this involves big cuts in grants to state and local agencies."

It’s still unclear where exactly the cuts would come from. White House budget chief Mick Mulvaney said yesterday that his office sent recommendations about how it thinks the agencies can make cuts to reach those targets. Agencies are expected to respond to the White House in the coming days, and the first round of formal top-line budget proposals will be sent to Congress in mid-March.

"On the budget front, we are committed to investments on the capital side, clean water projects, water treatment facilities and cleaning up Superfund sites and Brownfields sites," Ericksen said in an interview. "Any cut that did come would be on the non-capital side. It would be strategic and in line with the president’s agenda and Congress" (Greenwire, Feb. 27).

Much of EPA’s budget is doled out to states for environmental programs, and observers are expecting the cuts to heavily target operations and personnel.

"To the extent that grants to states and utilities to administer delegated programs and upgrade water infrastructure are spared, cuts to the EPA workforce would be magnified to reach a 24% overall reduction, with perhaps as many as 5,000 EPA scientists, engineers and other specialists being ‘de-funded,’" Jeff Ruch, executive director of Public Employees for Environmental Responsibility, said today in an email.

Ruch said his group is preparing to deliver legal aid to EPA employees who may be laid off.

O’Grady is expecting the Trump White House to target activities like climate change, the Waters of the U.S. rule that Trump aims to repeal and enforcement efforts. And, he added, "This is only the first year. So what’s in store after that?"

Stan Meiburg, who was EPA’s acting deputy administrator during the Obama administration, said the details about the budget cuts "make a tremendous amount of difference."

Taking a significant chunk out of the personnel budget could dramatically affect how the agency functions, he said.

"This notion that you can run EPA with the same 5,000 people that you did in 1970 is just not consistent with reality," Meiburg said. "In 1970, you didn’t have the whole range of laws that EPA now administers."

Meiburg said that while Trump’s executive orders — including one expected to come today that takes aim at the Waters of the U.S. rule — have sparked a lot of "noise and drama," the debate over the agency’s budget is "about the heart of the EPA."