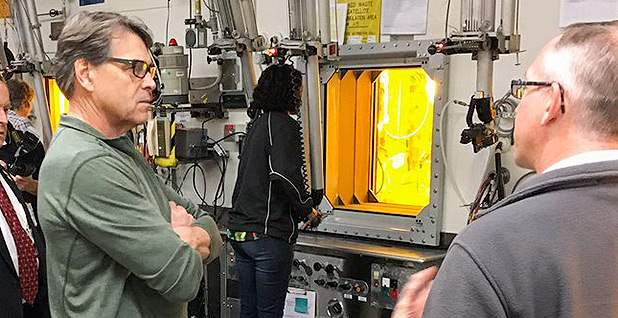 The Trump administration’s fiscal 2019 budget proposal calls for a 15 percent cut in energy research and development funding, made possible by the success stories of advanced technology that Energy Department officials say the government no longer needs to support.

"These are commercially deployable technologies," he said. "It’s actually a very good story to tell."

Spending on energy R&D in the department’s $30.6 billion budget would drop from the fiscal 2018 level set by Congress. DOE’s net budget authority for science would drop to $4.2 billion from $5.4 billion. The budget proposal puts its priority on "basic research, early-stage applied research, and technology transfer efforts that will lead to the breakthroughs of the future."

Some of the spending cuts are clustered in the Office of Energy Efficiency and Renewable Energy, where budget authority would sink to $696 million from $2 billion estimated for fiscal 2018.

"With all due respect, this is less of a rationale and more of an excuse. I say that because in the very technologies they’re pointing out, we have a long distance to go," responded Dan Reicher, executive director of Stanford University’s Steyer-Taylor Center for Energy Policy and Finance. He had been a member of the Secretary of Energy Advisory Board during the Obama administration.

"In batteries, we have a very steep cost curve to come down. Concentrated solar in most parts of the world is still out of the money," Reicher said.

"I would add, we have to look at the competition," he said. "Just as we are cutting back, the Chinese are ramping up investment in the same technologies — in many cases technologies we invented, often at taxpayer expense. This is absolutely the wrong moment to be pulling back on energy R&D."

The DOE budget plan proposes to create a new Office of Cybersecurity, Energy Security and Emergency Response, with $96 million in new budget authority. It would combine two existing DOE offices, one centered on cyber research and the other on disaster response and recovery operations for the energy infrastructure.

President Trump’s 2019 budget request would boost cybersecurity funding at a key Department of Homeland Security office by nearly $20 million compared with enacted 2017 levels, part of a broader effort to bolster cyber defense capabilities at the Department of Defense, the Department of Justice and DOE.

‘Cyber is a team sport’

Much of those funds went toward guarding federal information technology networks from hackers — DHS takes the lead in protecting .gov domains. But the NPPD is also responsible for assessing and responding to cybersecurity threats to 16 critical infrastructure sectors, from chemicals to transportation.

"DHS has continually had to do more with less, and I think the budget reflects that ideology," said Evan Wolff, a partner in Crowell & Moring LLP’s Washington, D.C., office and co-chair of the law firm’s Privacy and Cybersecurity Group.

One billion dollars may not be able to protect every endpoint in the private sector, Wolff noted, but it does "allow DHS to be relevant, and to move the needle when it comes to protecting the cyber aspects of our nation’s critical infrastructure."

The White House is proposing a $32 million expansion of the NPPD’s 24/7 cyber watch floor, where analysts keep tabs on hacking incidents and issue alerts to private companies and the general public. Meanwhile, the budget request would trim spending on DHS cyber education and awareness.

The new budget proposal seeks out more than $8 billion to advance the cybersecurity mission at the Department of Defense; would hike cyber spending at the FBI; and would bankroll the proposed Office of Cybersecurity, Energy Security and Emergency Response.

"Cyber is a team sport, and so the fact that [White House officials] are starting to fund some of the other agencies, such as DOE, to do cybersecurity reflects the fact that everyone needs to be involved," said Wolff.

Wolff, who formerly worked as a senior adviser at DHS, said the agency should retain its role as the go-to office for civilian cyberdefense.

"[Trump’s] emphasis on strengthening our cybersecurity operations at the Department of Homeland Security is critical in countering our highly sophisticated cyber adversaries," McCaul said, "and his steadfast promise to build a wall along our southern border and provide additional resources in technology, infrastructure, and personnel will better protect our homeland and citizens."

DHS’s congressional budget justification also sets aside $6.6 billion for major disasters in 2019 — a figure that does not include costs incurred during the devastating 2017 hurricane season. The Federal Emergency Management Agency noted that its own proposed budget includes "a reserve amount of $2 billion (an increase from previous years) due to the uncertainty around the availability of additional supplemental funding" to help Texas, Florida and Puerto Rico recover from Hurricanes Harvey, Irma and Maria.

As was the case a year ago, Trump’s budget proposal serves as a marker for his priorities on the energy front centered on promoting U.S. fossil fuel production to underpin his energy "dominance" goals. But his preferences have taken a back seat to Congress, where both chambers have already weighed in with fiscal 2018 appropriations bills following different priorities on several fronts.

Energy Secretary Rick Perry seemed to accept that outcome as inevitable, joking that when he was governor of Texas, his state budget proposals were considered handy "doorstops." "Here is our wishes," Perry said of the Trump 2019 budget request. "Then Congress does their business."

The new DOE budget proposal again cuts off funding for the Advanced Research Projects Agency-Energy (ARPA-E), but Senate energy appropriators supported it in this year’s spending measure, raising the budget for the Obama administration initiative to $330 million. "The committee definitely rejects this shortsighted proposal," senators said about the proposed funding cutoff. The House appropriations bill, however, sided with the administration.

"The idea of ARPA-E is to fund new ideas that require research and blend science and engineering," Stanford professor Arun Majumdar, the founding director of ARPA-E, said in an interview last year. These are risky projects with potentially very high payoffs if they make it, he said. Some succeed, while some don’t, but the point is to support the attempts. ARPA-E critics "need to look at the results of these funded projects," he added. "They are all around the country."

The new budget plan again proposes to zero out the Title 17 Innovative Technology Loan Guarantee Program, reclaiming $363 million in unobligated prior-year appropriations, "in accordance with administration priorities, including the focusing of resources toward early-stage research and development," the proposal said. The House 2018 appropriation supported a cutoff, although it would retain funding for loan projects given preliminary approval by Oct. 1, 2017. The Senate bill would not cancel the program.

One of the ARPA-E projects awaiting a decision, and given preliminary approval by the Obama administration’s DOE, is a breakthrough process for manufacturing silicon wafers that become the base of photovoltaic solar cells (Energywire, March 21, 2017).

The funding would enable 1366 Technologies, in Bedford, Mass., to open its first production line in a new factory in upstate New York. "We produce the wafers for one-third the energy and half the cost," company CEO Frank van Mierlo said in an interview last year.

The company has supply contracts and investment from leading German and South Korean firms. "This technology is going to be a big part of solar manufacturing going forward and hopefully capture jobs in the U.S. That would be great," van Mierlo said.

"Clearly that will only happen if we successfully work with the new administration," he added. "Whether the loan guarantee is there or not is a decision Rick Perry has to make."

The $220 million Grid Modernization Laboratory Consortium project was included in a questionnaire sent by a Trump transition team to DOE officials before Trump took office, which sought information about laboratory staff including its contributions to outside websites "during work hours."

The DOE consortium combines research at 13 of the 17 DOE national labs, other DOE offices, and industry and academic partners across 88 projects. The research involves studying advanced systems to manage dynamic changes in renewable power generation and battery storage. And it involves studying ways to better integrate rooftop solar power and other distributed generation onto a grid that was built for large, centralized power plants that burn coal and gas (Energywire, Jan. 15, 2016).