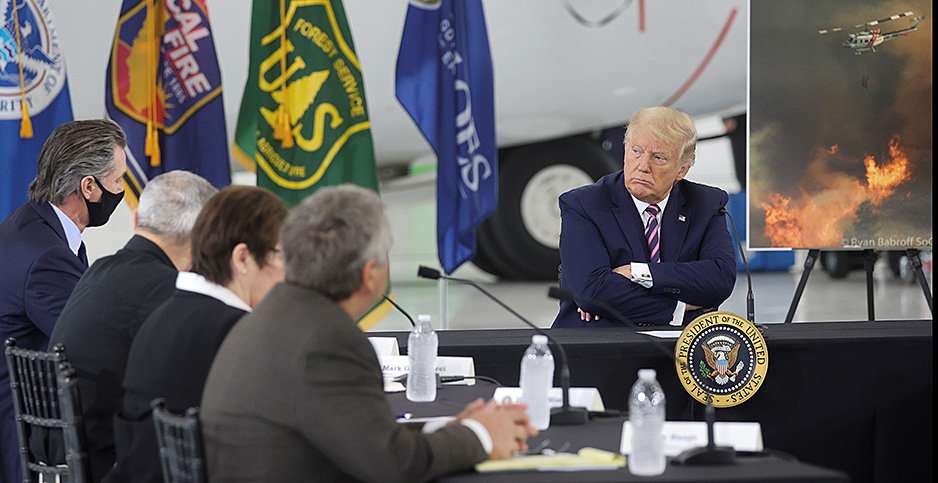 President Trump circumvented federal regulations and made an apparently unprecedented use of presidential powers Friday when he abruptly reversed his decision denying California’s request for disaster aid after deadly wildfires.

Two days after rejecting a formal request by California Gov. Gavin Newsom to have a "major disaster" declared in seven counties, Trump changed his mind after talking to Newsom, a Democrat, and House Minority Whip Kevin McCarthy, a Republican whose California district would benefit from Trump’s action.

Trump’s reversal bypassed an official appeals process that directs governors to file a written appeal with the Federal Emergency Management Agency if they want a president to reconsider a denial of disaster aid. The process is enshrined in federal regulations.

Trump’s decision also apparently contradicted FEMA leaders, who the White House said had recommended that Trump deny California’s request because the damage was too minimal to merit federal aid.

And it illustrates how Trump has stretched the rules on spending the federal government’s multibillion-dollar Disaster Relief Fund.

Presidents have the final say in approving disaster declarations that give federal taxpayer dollars to states for cleanup and repairs and give individuals cash for emergency expenses such as housing.

But presidents typically follow a painstaking process whereby requests for disaster aid — or an appeal of a denial — are reviewed by FEMA officials in a governor’s region and at agency headquarters in Washington, who make a recommendation to the White House. At the White House, teams including the Office of Management and Budget review the requests before a recommendation goes to a president.

"It’s the only time I recall anything like this happening," said a former senior FEMA official, who asked not to be named. "For the White House to come out and deny a declaration request and then, without receiving any appeal or additional information, to reverse itself — that’s a first, to my knowledge."

Federal regulations say governors "may appeal the decision" of a president denying their request for disaster aid, and should submit a letter "along with appropriate additional information" to the FEMA official in charge of a governor’s region.

Newsom provided no additional information. During a remote appearance Friday at the Milken Institute’s 2020 Global Conference, Newsom said he reached Trump that day by phone on Air Force One and the president changed his mind instantaneously.

"I reached out and I said, ‘We may have seen this major declaration rejected, but I hope you would’ — and he said — I couldn’t even finish the ask — he said, ‘You got it. I’m signing off on that major disaster declaration in California,’" Newsom recalled an hour after talking to Trump.

McCarthy, who led the defense of Trump during the House impeachment proceedings early this year, represents a district that includes part of Los Angeles County. Trump’s disaster declaration provides aid to seven California counties damaged by wildfires in September, including Los Angeles.

Regulations do not prevent presidents from reversing their denials of a disaster request at any time or bar governors and lawmakers from making personal appeals to presidents. Governors and members of Congress routinely lobby the White House and FEMA to approve disaster declarations and to reverse denials.

"It’s not uncommon to get things denied and get more information and get them approved," said Craig Fugate, who ran FEMA from 2009 to 2017.

But the formal appeals process has traditionally been followed to allow FEMA and the White House to analyze any new information from a governor and make a recommendation to the president.

Fugate could not recall an instance in which his boss, President Obama, reversed his decision on a disaster denial without receiving a written appeal from a governor.

"I don’t remember it," Fugate said. "It could be the information FEMA provided [the Trump White House] hasn’t changed, and the White House changed its mind."

"The appeal process is a formal process, but there’s nothing that says you have to do an appeal," Fugate added.

Trump’s reversal raises the prospect that in overruling FEMA’s recommendation to deny Newsom, Trump approved disaster aid for individuals and a state that did not meet federal eligibility guidelines.

Newsom’s request for disaster aid "was not supported by the relevant data," and Trump "concurred with the FEMA administrator’s recommendation," Deere, the White House spokesman, said Thursday.

At the same time, FEMA said the damage assessments it conducted with state and local officials in California determined that the wildfires in early September "were not of such severity and magnitude" that they merited federal disaster aid.

A FEMA official told E&E News on Friday, before Trump reversed his decision, that Newsom’s request for aid to individuals and households was rejected because many of the people affected by the wildfires had insurance. FEMA provides emergency cash under its individual assistance program only to help pay for uninsured losses.

That level of damage would ordinarily be sufficient for FEMA to recommend and a president to approve individual assistance.

But FEMA determined that 75% of the homes cited by Newsom as "uninsured" actually had property insurance, the agency official told E&E News.

"My report has 948 total residences, and 75% of those are insured," the official said.

In January 2018, Trump rejected a similar request for individual assistance by then-Gov. Jerry Brown of California, who cited 1,004 homes destroyed by wildfires and 55 homes that sustained major damage. FEMA determined that 80% of the homes were insured.

The FEMA official could not explain the denial of Newsom’s request for public assistance, which pays for 75% of a state’s cost in responding to and rebuilding from a disaster.

Newsom’s Sept. 28 letter lists $346 million in cleanup and repair costs as a result of wildfires that started in early September and have burned 650,000 acres in the seven counties.

That is easily enough to qualify for federal aid under a FEMA formula that sets a threshold for each state to receive public assistance. For California, the threshold is $58 million in costs related to disaster cleanup and repair.

"That is very strange as to why they would not declare that," the former FEMA senior official said.

Neither FEMA nor the White House explains to the public or to state officials why disaster requests are rejected beyond providing boilerplate language about a request failing to show sufficient need.

Trump’s initial denial generated skepticism because of the extent of wildfire damage in California this year and because Trump repeatedly has blamed California for the wildfires, saying it has failed to maintain forests.

Despite his criticism, Trump has approved five disaster declarations for California wildfires since taking office — including a declaration Aug. 22 — that have resulted in the state and its residents receiving $3.2 billion in federal disaster aid, FEMA records show.

In bypassing the appeals process, Trump continued his pattern of stretching the limits of federal disaster law and politicizing the disaster process.

"Throughout this administration, he’s made decisions about disaster response in ways that previous presidents may not have," said Samantha Montano, a professor of emergency management at Massachusetts Maritime Academy and author of a blog about disasters.

In March, when Trump began declaring major disasters for state efforts to deal with COVID-19, he became the first president to declare that a health epidemic was a major disaster. Federal law lists 13 types of "natural catastrophes" that can be declared a major disaster, including hurricanes, earthquakes and mudslides, but it does not list epidemics.

The Congressional Research Service noted at the time that a major disaster "has not been authorized in response to a public health incident of any type."

Trump also has feuded publicly with disaster-aid recipients such as Newsom, whom he has blamed for inadequate forest management, and the mayor of San Juan, Puerto Rico, whom he accused of "poor leadership" after Hurricane Maria devastated the territory in 2017.

"He overly politicizes everything," Montano said. "He seems to respond well to people picking up the phone and talking to him directly and persuading him to make decisions."