Trump can’t drop climate from his speech. Here’s why 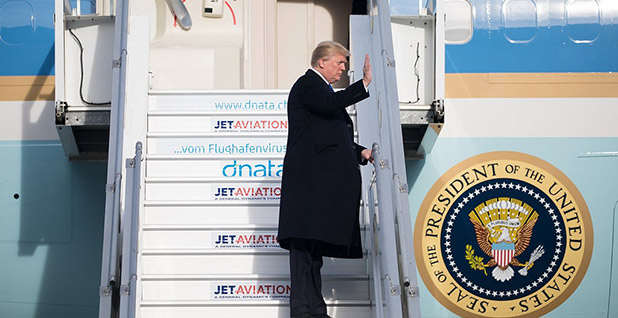 President Trump is not expected to raise the issue of climate change when he addresses the nation tonight. Shealah Craighead/White House/Flickr

At least three of President Trump’s State of the Union guests can blame global warming for their invitations.

But don’t expect Trump to mention climate change tonight, even though hurricanes and wildfires dominated his first year in office.

The administration hopes to set this year’s agenda by emphasizing infrastructure and trade, and Trump will likely tout his agencies’ moves to cut regulations and boost fossil fuel production. To some, all those topics add up to a climate policy for an administration that’s determined to eschew one.

"There’s probably too much focus on having politicians say the magic words of ‘climate change,’" said Josiah Neeley, energy policy director at the free-market R Street Institute. "The policies are going to have the effects they’ll have regardless of what Trump, or anyone else, believes about greenhouse gases."

The real value of tonight’s address, historians say, is for Trump to frame his agenda directly to voters — a ritual that has become unique as the media landscape has grown more fractured and partisan.

A major part of that pageantry since 1982 has been the presidents’ guests, invited to humanize policy and exemplify American values. This year, Trump invited three people who rescued others during last year’s natural disasters, which scientists are getting more confident about linking to climate change.

Jon Bridgers is a founder of the Cajun Navy, a volunteer force that helped people trapped by Hurricane Harvey. David Dahlberg, a firefighter from Southern California, saved 62 people from wildfires in July. And Ashlee Leppert, a Coast Guard aviation electronics technician, airlifted dozens of hurricane victims to safety.

Glossing over climate change while honoring people who grappled with it — that’s a tidy encapsulation of this administration’s paradoxes, said Mary Stuckey, an expert in presidential rhetoric and a professor at Pennsylvania State University.

"Donald Trump is going to have these recent examples of American heroes, which is kinda Reaganesque, but the underlying connection between these people is … hello, climate change," she said. "None of these people would have a cause to display their innate heroism if it weren’t for climate change — which we’re not talking about."

That’s typical of his style, she said. It’s open-ended enough for people to read into it what they want.

Trump either dodges climate questions or answers them with falsehoods (Climatewire, Jan. 29). But his climate legacy is already taking shape around the contours of other issues.

His biggest trade move has been to slap tariffs on imported solar equipment, and any moves he previews tonight promise to needle countries still bitter over his decision to quit the Paris climate agreement.

The biggest infrastructure needs are in places still recovering from last year’s natural disasters, and greens worry that his infrastructure initiative could loosen environmental protections in the name of building quickly.

Energy dominance has become a theme across agencies, which have begun rolling back the Obama administration’s Clean Power Plan and opening up new areas for oil and gas drilling. Those areas include the Arctic National Wildlife Refuge in Alaska, where warming is happening twice as fast as in most other places.

Political observers expect Trump to frame those moves as simply boosting jobs. And if he does make environmental overtures, he’ll phrase them so his base can say he doesn’t mean it, said Wayne Fields, a historian of presidential rhetoric and a professor at Washington University in St. Louis.

Historically, leaders of both parties have found ways to couch climate change within their own agendas since its first mention during President Clinton’s 1998 State of the Union.

"Last year’s heat waves, floods and storms are but a hint of what future generations may endure if we do not act now," Clinton said during his 1999 address, one year after saying climate policies could coexist with economic growth.

President Obama mentioned climate change in each State of the Union speech except in 2011, when he still urged historic investments in "clean energy" funded by ending oil company tax benefits.

(President Nixon made the first State of the Union mention of "clean energy" in 1972.)

President George W. Bush waited until his 2007 State of the Union to say his goal of reducing foreign oil demand could also "help us to confront the serious challenge of global climate change."

The next year, Bush, who had opposed the Kyoto Protocol, outlined his wish for something that now sounds like the Paris climate accord: a worldwide agreement coupled with an "international clean technology fund" that would lower emissions in developing countries as well as rich ones.

"This agreement will be effective only if it includes commitments by every major economy and gives none a free ride," he said.

Those addresses, like every State of the Union, offer a historical record of what people considered important at the time, said Vanessa Beasley, a historian of presidential rhetoric and a professor at Vanderbilt University. They also validate whom the president seeks to represent — who "counts" as part of the union.

Trump’s first address to a joint session of Congress last year got high marks because his conventional delivery was a "novelty act," said David Greenberg, a professor at Rutgers University. "I wonder whether he can play that card again," he said.

Part of the State of the Union’s purpose is to shore up a president’s credibility, but Trump has already undercut himself, Fields said.

People don’t know how much to trust his prepared remarks, but they know to trust the sentiments behind his tweets, he said.

"What he says during the formal speech, [people can dismiss as] ‘Oh, that’s them talking. But the tweets, that’s our boy,’" he said.