Trump chats with the prince. ‘He is really into climate’ 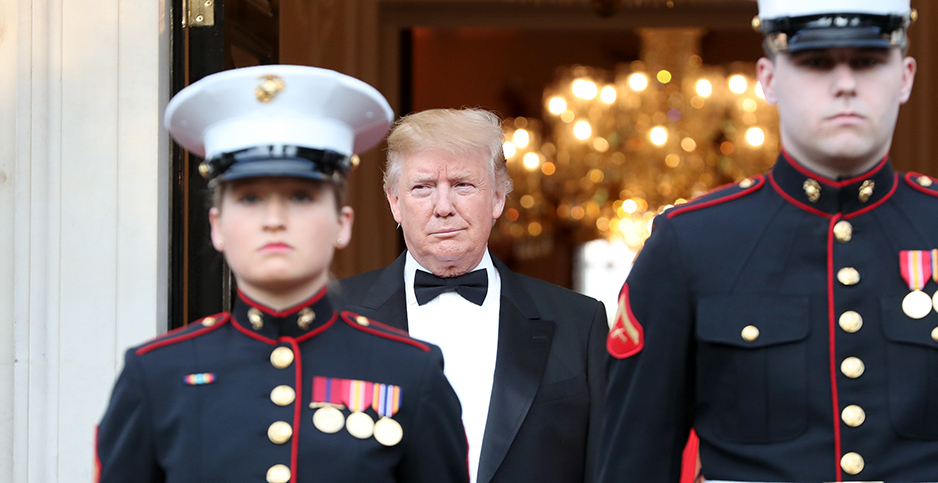 President Trump hosted a dinner at the Winfield House yesterday in London. i-Images/Polaris/Newscom

Prince Charles and Prime Minister Theresa May pressed President Trump to address climate change during his state visit to the United Kingdom.

In an interview with Piers Morgan on "Good Morning Britain" that aired this morning, Trump said he was impressed by Prince Charles’ concern about the environment.

Trump said that it was supposed to a brief chat, but it ran on because Prince Charles was so passionate about climate change.

"We were going to have a 15-minute chat, and it turned out to be an hour and a half, and he did most of the talking," Trump said. "He is really into climate change, and I think that’s great; I like that, and I want that."

"Did you listen to him?" Morgan asked.

"I totally listened to him," Trump said.

Trump said he told Charles "that the United States has one of the cleanest climates there are, based on all statistics, and it’s even getting better." In fact, the United States’ emissions of greenhouse gases increased last year, and its air pollution lags behind a number of other developed nations.

When Morgan pressed Trump on whether he accepted the reality of climate science, Trump tried to portray the science itself as uncertain. He suggested that there has always been natural variability in the climate.

"I believe that there is a change in weather, and I think it changes both ways," he said, referring to natural and human forces. "Don’t forget, it used to be called global warming; that wasn’t working, then it was called climate change, and now it’s actually called extreme weather, because with extreme weather, you can’t miss. Look, we have a thing now with tornadoes. I don’t remember tornadoes in the U.S. to this extent. But then, when you look back 40 years ago, we had the worst tornado binge that we’ve ever had. In the 1890s, we had our worst hurricanes, and I say we’ve had some very bad hurricanes."

The term "climate change" is used more frequently than "global warming" because scientists determined it was more accurate, since the effects of rising carbon dioxide levels do more than just warm the planet.

Scientists are still uncertain about the connections between tornadoes and climate change. The warming of the planet creates conditions that can drive stronger hurricanes, such as warmer ocean temperatures and more moisture in the air, but scientists do not believe it has increased the number of hurricanes.

Trump has not sought a briefing on climate change from NOAA or NASA, two of the top science agencies in the world. However, he has received multiple briefings on climate from William Happer, an emeritus physics professor at Princeton University not formally trained in climate science. Happer is on the White House National Security Council, where he is leading an effort to conduct a hostile review of climate science.

Prince Charles was not alone in pressing Trump to address climate change.

May, while standing next to Trump, told reporters that she had discussed climate change with him. She said she also pressed him on the importance of the Paris climate agreement.

"Recognizing our nations are safer and more prosperous when we work together on the biggest challenges of our time, I also set out the U.K.’s approach to tackling climate change and our continued support for the Paris Agreement," she said.

Trump’s comments about climate came just weeks after the U.K. Parliament declared a "climate emergency." In addition, last month, a government committee recommended that the country’s carbon emissions be cut to zero by 2050.

The United Kingdom just experienced its longest run of generating electricity without the use of coal. Trump is a champion of the fuel.