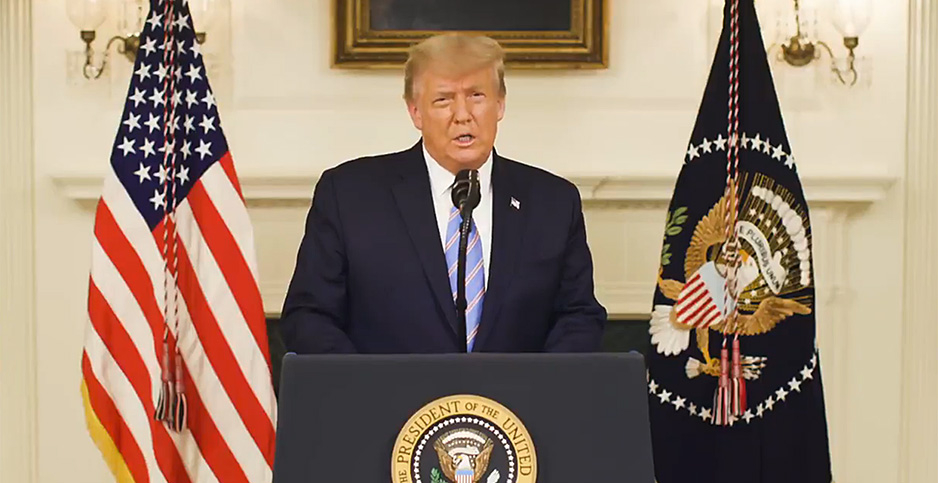 Congressional Democrats are pushing to remove President Trump from office in the wake of riots that wreaked havoc at the Capitol on Wednesday.

Top Democrats, House Speaker Nancy Pelosi (D-Calif.) and Senate Minority Leader Chuck Schumer (D-N.Y.), yesterday asked Vice President Mike Pence to invoke the 25th Amendment to the Constitution and work with the Cabinet to remove Trump. If not, Democrats signaled they could move to impeach the president for encouraging supporters to target the Capitol.

In a statement yesterday evening, Schumer and Pelosi said they called Pence yesterday morning to urge him to make the move but had not yet heard back.

"The president’s dangerous and seditious acts necessitate his immediate removal from office. We look forward to hearing from the Vice President as soon as possible and to receiving a positive answer as to whether he and the Cabinet will honor their oath to the Constitution and the American people," Pelosi and Schumer said.

Pence, who condemned the violence, has not yet publicly weighed in on possibly invoking the 25th Amendment.

Trump, feeling heat over his role in the riots, released a video yesterday acknowledging the election loss and not claiming voter fraud.

"Now Congress has certified the results. A new administration will be inaugurated on January 20th. My focus now turns to ensuring a smooth, orderly and seamless transition of power," he said.

House Democrats are set to huddle on a caucuswide call this morning to decide how to move forward if Pence won’t act. It’s unclear how Trump’s video will change their calculus and that of many Republicans who have been turning on the president.

House Judiciary Chairman Jerry Nadler (D-N.Y.), who helped lead the passage of articles of impeachment against Trump in the last Congress, called on the House to do so again. Nadler acknowledged that committee hearings won’t be possible with Trump already due to end his term on Jan. 20.

"We have a limited period of time in which to act. The nation cannot afford a lengthy, drawn-out process, and I support bringing articles of impeachment directly to the House floor," Nadler said.

Pelosi yesterday, during a press conference, tore into Trump and said Democrats wanted the president gone as soon as possible.

"That is the overwhelming sentiment of my caucus and the American people, by the way," Pelosi said. "Justice will be done to those who carried out these acts."

President-elect Joe Biden denounced Trump yesterday but sidestepped calling for an early exit. He accused Trump of "inciting a mob to attack the Capitol, to threaten elected representatives of the people of this nation and even the vice president, to stop the Congress from ratifying the will of the American people in a just-completed, free and fair election."

‘Getting through the next 14 days’

Many congressional Republicans — except many of Trump’s fans — criticized the president’s role in inciting the riots, but few called for having him removed from office early.

Sen. Lindsey Graham (R-S.C.), an ally of the president, said that Trump "tarnished" an "amazing four years" of conservative victories with Wednesday’s events.

Graham opposed invoking the 25th Amendment to remove Trump and called for a peaceful transfer of power — unless, he said, "something else happens," at which point "all options would be on the table."

Asked about efforts to disqualify Trump from running for office again in 2024, Graham replied, "I’m not worried about the next election. I’m worried about getting through the next 14 days."

Backers of impeachment may find their greatest challenge is the calendar. Even if the House acted by early next week, the Senate would still be required to hold a trial that could take days to negotiate.

A two-thirds vote of the chamber would be required to remove Trump from office for high crimes and misdemeanors, a threshold that might not be reachable.

Federal prosecutors are also said to be examining possible charges against Trump for inciting a mob, leading to renewed talk that the president might seek to pardon himself before leaving office.

The Wall Street Journal editorial board, known for its conservative leanings, said the president should resign to spare the country another impeachment fight.

"If Mr. Trump wants to avoid a second impeachment, his best path would be to take personal responsibility and resign," they said last night.

Amid widespread criticism of the Capitol Police’s failure to prevent and contain rioters, lawmakers on both sides of the aisle have called for probes and resignations.

Earlier in the day, the Capitol Police union called for a "change at the top" and said officers "were frustrated and demoralized" about how leaders had handled the riot response.

Appropriators in both chambers called for hearings to probe what went wrong with the Capitol Police, which received $516 million for fiscal 2021.

‘Failed in their duties’

House Appropriations Chairwoman Rosa DeLauro (D-Conn.) and Rep. Tim Ryan (D-Ohio), chairman of the Legislative Branch Appropriations Subcommittee, released a statement praising the bravery of law enforcement officers but said there was a "severe systemic failure" in securing the building and responding to the rioters.

"To ensure the safety of those who work and visit here, we must get to the bottom of these breakdowns and prevent them from ever happening again. The Legislative Branch Appropriations Subcommittee, which funds the Capitol Police, is robustly investigating yesterday’s events, including with hearings to directly question key leaders about what went wrong," they said.

Graham, a senior Senate appropriator, said he would personally hold law enforcement accountable for prosecuting the rioters and determining why the Capitol Police were so ill-equipped to confront the violent mobs.

"A band of people who are terrorists, not patriots, literally occupied the floor of the House, drove the Senate out of its chamber, and the question for the country is, how could that happen 20 years after 9/11?" Graham asked. "Anyone in charge of defending the Capitol failed in their duties."

Graham called for the removal of current Capitol Police leadership and the creation of a "joint task force to identify every person who breached the security of the Capitol, who occupied the chambers, invaded offices and destroyed property."