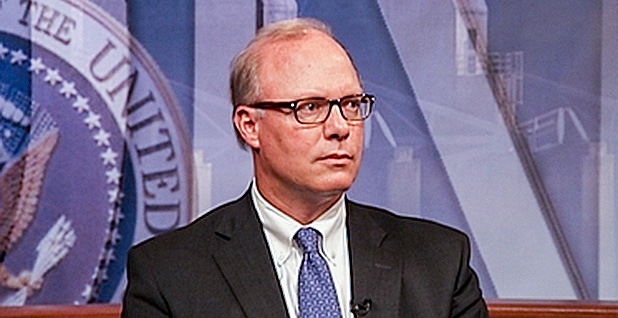 Capitol Hill aide Bill Cooper is under consideration to lead the Council on Environmental Quality. Photo courtesy of E&ETV.

President Trump is considering Bill Cooper, a House staffer with years of experience lobbying for gas export companies, to head the Council on Environmental Quality, according to sources.

The job could be among the most powerful environmental jobs in government, yet it remains to be seen what role the CEQ will play in the Trump administration.

Cooper is staff director for the Natural Resources Subcommittee on Energy and Mineral Resources. Before joining the committee in 2015, he served as president of the Center for Liquefied Natural Gas and filled a number of roles in the private and public sector.

Also rumored to be in the running for the job are former Texas regulator Kathleen Hartnett White, now working at the conservative think tank Texas Public Policy Foundation, and Marty Hall, who was CEQ’s chief of staff during the George W. Bush administration.

White’s name has long been mentioned, and she’s being advocated by coal industry executives and members of conservative think tanks (Greenwire, Feb. 9).

Cooper would be well-suited to play a role at CEQ should Trump decide to use the agency to advance new infrastructure.

He has nearly three decades of experience in different aspects of the energy industry, including a stint as a partner at the law office of Hunton & Williams LLP.

Cooper also served as counsel to the House Energy and Commerce Committee. He helped draft and negotiate the Pipeline Safety Improvement Act of 2002 and was a lead negotiator for the House on several provisions of the national energy policy bills in the 107th and 108th Congresses, according to his online bio.