Trump could ‘flood the zone’ to combat House Dems 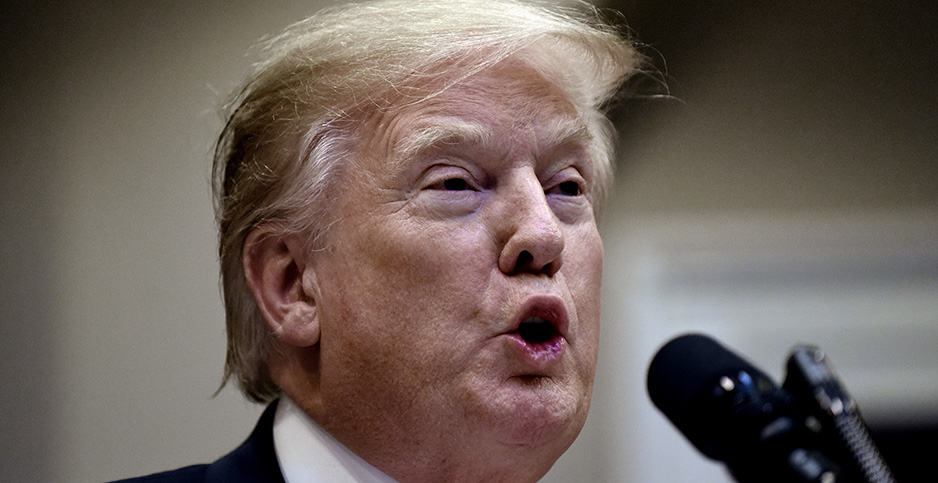 President Trump's administration will press ahead on its energy and environmental agenda even as Democrats take control of the House next year. Douliery Olivier/ABACA/Newscom

President Trump’s allies hope his administration will plow ahead with its deregulatory energy and environmental agenda next year, despite resistance from newly empowered House Democrats.

With Majority Leader Mitch McConnell (R-Ky.) still in charge of the Senate, Democrats will be limited to conducting oversight of the administration and potentially some narrow legislative compromises, according to officials close to the administration.

"I don’t see much of a change in the regulatory space," said George David Banks, who was an energy adviser in the Trump White House and is now executive vice president at the American Council for Capital Formation.

"Obviously, the House can influence it to a certain degree through oversight," he added, but "I’m not even sure how much oversight really impacts the executive branch. Certainly the Obama administration’s regulatory agenda was not curtailed by the Republican Congress."

Much will depend on how the Trump administration responds to the expected flurry of Democratic hearings, letters and subpoenas.

Pyle thinks there is a benefit to "having lots of things out there moving simultaneously — knowing internally and hopefully not leaking what the priorities would be to kind of focus them a little bit more." Such a strategy would "also give the other side a bunch of targets that they have to figure out what to shoot at."

Alternatively, the Trump administration "can hone down and really focus on one or two or three major priorities," Pyle said. "I really don’t have a strong sense of which direction that they may go yet on that."

"If they decide that, ‘Hey, we need to be responsive,’ then that’s certainly going to eat up resources and have an impact on your ability to push through administrative action." Instead, the White House could "just choose to ignore and say, ‘We’re not going to do it, so good luck with that,’" he said.

While Republicans’ expanded majority in the Senate will make it easier for Trump’s top picks to win confirmation for key administration positions, dogged House Democratic oversight could make such jobs less appealing for nominees.

"Are they going to want to spend a large chunk of their time with the Democrat House?" Pyle said. "It’s a limiting factor for sure in the talent pool, no doubt about it."

The power vacuum, however, could benefit conservative groups, according to the American Energy Alliance president.

"What I think it will do is kind of empower organizations like ours and others who spend a lot of time thinking about these things and putting together policy ideas and we’ll continue to make those available to anybody to pick up and run with," he said.

Trump administration supporters think some legislative compromise remains possible, even in a divided Congress where party leaders are keeping their eyes on the 2020 presidential race.

"I think it’s interesting that Republicans have decided to neuter themselves during this legislative session," she added. "That might prove to be a wise strategy, in that maybe they’re forgoing getting some things done now in the hopes of some bipartisan compromise in next two years."

One example Sgamma pointed to was H.R. 4239, a bill from Rep. Steve Scalise (R-La.) that would open the eastern Gulf of Mexico to oil and gas drilling (E&E Daily, May 22).

The legislation "has some provisions that could be attached maybe to some type of lame-duck bill, but it doesn’t look like there’s a lot of appetite for moving forward with that," she said.

Banks, meanwhile, sees the potential for Democrats and Republicans to compromise on infrastructure spending.

Pyle predicted that an energy efficiency package long championed by Sen. Lisa Murkowski (R-Alaska) could finally make it to the president’s desk. He is also looking ahead to what could happen in December 2019.

"What I do fear is that there could be potentially a lot of mischief in an end-of-the-year mega-package of all of the spending bills, some reconciliation, an infrastructure package and — ‘Oh, what pay-fors are we going to do? Should we increase the gas tax? Should we air drop a carbon tax?’" Pyle said.

"That to me is the worst-case scenario," he added. "We’ll be keeping our eye out for that and obviously doing our best to prevent that from happening."