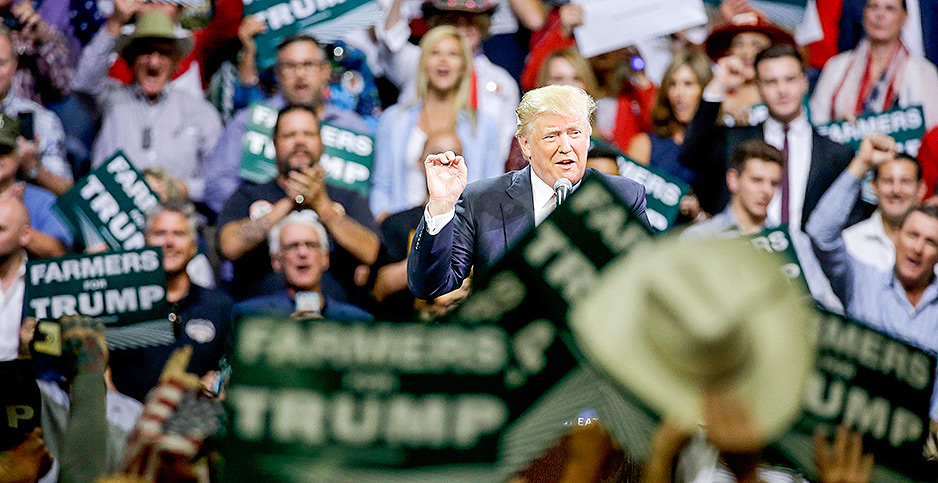 President Trump at a rally in California during his 2016 campaign. Chris Carlson/Associated Press

But critics were quick to denounce the reasoning behind the order, which, coming just weeks before Election Day, appears to be part of a recent effort to fortify the administration’s environmental record and deliver on a campaign promise to provide more water to Western farmers.

The order touches on a broad range of issues, from creating new water storage for Western farmers, to Florida Everglades restoration, to the Great Lakes.

"The Trump Administration has made it a priority to ensure communities across the nation receive safe, reliable water," Interior Secretary David Bernhardt said in a statement. The order "furthers our incredible efforts over the past three and a half years to cut bureaucratic red tape and improve water infrastructure."

Critics quickly challenged the order’s motivations and cast many of its action items as capitalizing on ongoing work while ignoring the challenge of climate change. In particular, they noted that action item No. 1 was a directive to "increase water storage, water supply reliability and drought resiliency." In the West, that typically means shuttling limited water supplies away from the environment and to farmers.

Jayson O’Neill of the Western Values Project said a key benefactor would be farmers like those in California’s Westlands Water District, a former client of Bernhardt’s when he worked as a lobbyist before joining the administration.

"Once a lobbyist, always a lobbyist," O’Neill said. "Unpack this order and you’ll find crooked former lobbyist Secretary Bernhardt has tipped the scale toward his monied special interest clients once again."

Interior maintains that Bernhardt has been resolute in maintaining his ethical responsibilities, including signing an ethics pledge in August 2017 and vowing not to participate on any issues related to his lobbying work in the two years prior to joining the department.

"The President’s bold action is about the millions of Americans that rely on public water infrastructure to have clean drinking water and grow crops that feed our country," Conner Swanson, an Interior spokesman, said in an email. "To suggest this action is anything otherwise is untethered from reality."

The order aims to provide "abundant, safe, and reliable" water supplies. It contends that the current federal bureaucracy has overlapping responsibilities for water management, and seeks to streamline the process.

"This order," it states, "will ensure that agencies do that more efficiently and effectively to improve our country’s water resource management, modernize our water infrastructure, and prioritize the availability of clean, safe, and reliable water supplies."

It will do so by reducing "unnecessary duplication" in the government and "consolidating existing water-related task forces, working groups, and other formal cross-agency initiatives."

On the campaign trail in 2016, Trump campaigned on delivering more water to Western farmers, particularly those in California who are frequently at odds with state and environmental groups over how to divvy up the state’s most precious resource.

Yesterday’s order is another effort to deliver on that promise. Trump signed a somewhat similar executive order in the days leading up to the 2018 midterm elections to improve coordination between the Interior and Commerce departments (Greenwire, Oct. 22, 2018).

Trump referenced that work and an endangered fish, the delta smelt, in a rambling interview on Fox News last week. Using frequently debunked talking points, he told host Sean Hannity that California "is going to have to ration water" because it is sending "millions of gallons out to the sea."

"[It’s] because they want to take care of certain little tiny fish that aren’t doing very well without water," he said. "They have farms here, and they don’t get water. It is so ridiculous."

The order calls on agencies for recommendations on how to increase water storage, reliability and drought resiliency, including by "adding additional storage capacity."

It also calls for more efforts in the Colorado River Basin, which continues to struggle with drought conditions.

"Farmers cannot grow the food and farm products we all consume without water," said California Farm Bureau Federation President Jamie Johansson in an email. "It’s time for agencies and elected officials at all levels to put aside differences and come together around this critical issue. Our aging water system needs concerted, coordinated work to assure it can provide safe water for drinking and irrigation and a healthy ecosystem."

Trump’s order formally creates an interagency water subcabinet, a panel that will be co-chaired by Bernhardt and EPA Administrator Andrew Wheeler to work closely with the White House to eliminate duplication among agencies working on water issues.

Other members of the subcabinet include the heads of the departments of Agriculture, Commerce and Energy, as well as the Army Corps of Engineers and other agencies as Wheeler and Bernhardt "deem appropriate," according to the executive order. They will work closely with senior officials from the White House Council on Environmental Quality, Office of Management and Budget, and Office of Science and Technology Policy.

"By establishing the Water Subcabinet, President Trump is bringing key policymakers together who will coordinate actions to streamline needs of our Nation. Once again, the Trump Administration is taking action to deliver practical results for the American people," CEQ Chair Mary Neumayr said in a statement.

The group has existed informally for months to focus on Western agricultural water needs.

The Family Farm Alliance, an advocacy group focused on shoring up water for irrigation in the West, said in a statement that it hosted several members of the group at its annual conference in Reno, Nev., in February.

The subcabinet under the executive order is charged with reducing duplication between federal agencies; developing a national water strategy to ensure the reliability, quality and forecasting of water supplies; promoting integrated planning and coordination; and supporting recruitment of water sector professionals. The subcabinet’s first report laying out recommended action items and milestones for fiscal 2021 through 2025 is due in three months — days away from Inauguration Day on Jan. 20, 2021.

But Trump’s executive order formalizes or repackages ongoing work on issues like restoration of the Everglades, the Great Lakes and other bodies of water.

The order, for example, calls on the subcabinet to implement the third installment of the Great Lakes Restoration Initiative action plan issued in the fall of 2019 by EPA. That work is already ongoing. The order also calls for increasing coordination between agencies and members of the South Florida Ecosystem Restoration Task Force and completing activities in the Comprehensive Everglades Restoration Plan. That plan, comprised of dozens of construction projects sprawled over 18,000 square miles of South Florida with a cumulative estimated price tag of more than $10 billion, has been ongoing for almost two decades.

Even so, Trump is expected to make more aggressive attempts at burnishing his environmental credentials ahead of the election. Yesterday, he signed an executive order aimed at boosting the country’s involvement in the international Trillion Trees Initiative, an effort to plant and preserve 1 trillion trees around the world to sequester carbon (Greenwire, Oct. 13).

And in the coming days, EPA is expected to unveil a final lead and copper rule. While critics have blasted the proposal as too weak, the Trump administration is expected to tout the rule as a major achievement, including the first requirement to test for lead in day cares and schools.