Trump declared every state a disaster. But need remains 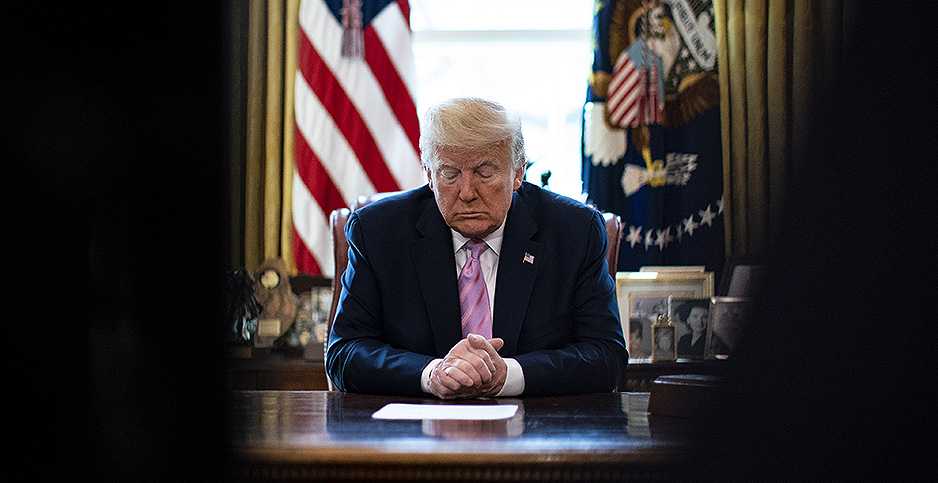 President Trump has taken the unprecedented step of declaring every state a major disaster due to COVID-19, but the designation so far has been insignificant for all but a handful of states.

Trump in the past four weeks has approved the disaster declarations sought by each of the nation’s 50 governors as well as the District of Columbia and four U.S. territories. With Wyoming declared a disaster Saturday, the pandemic is the first event in U.S. history that has resulted in the entire nation being declared a "major disaster."

But the approvals so far are largely symbolic.

Even as Trump has declared every state a major disaster — a designation that can make a state and its residents eligible for billions of dollars in federal disaster aid — the administration has not approved most governors’ requests for disaster programs such as crisis counseling and legal assistance for individuals.

Those requests are "under review," according to the Federal Emergency Management Agency, which distributes disaster aid.

Only one type of disaster aid has been approved for each state in the declarations — a program that reimburses 75% of state costs for "emergency protective" measures related to the pandemic, including costs of emergency medical care.

But states were already eligible for the reimbursement under an emergency order Trump signed March 13.

The administration’s decisions have bewildered some disaster officials and added to the uncertainty facing states as the economic shutdown diminishes their tax revenues and threatens government services.

FEMA has more money than ever in its Disaster Relief Fund, which pays for disaster aid and received a $45 billion emergency allocation from Congress in the recent $2.2 trillion economic recovery package.

The disaster fund had $84 billion on March 31 — double the amount it had a month earlier, according to FEMA. Three years ago, the fund had just $5 billion.

Govs. Larry Hogan of Maryland and Andrew Cuomo of New York said Saturday that governors’ stay-at-home orders have caused "catastrophic damage to state economies" and that states need $500 billion in federal aid. Hogan, a Republican, and Cuomo, a Democrat, made the plea as chairman and vice chairman, respectively, of the National Governors Association.

The association and several individual states, including New York, have asked FEMA to reimburse all costs of emergency protective measures instead of the standard 75% reimbursement. FEMA has not approved any state request.

FEMA said in response to E&E News questions about governors’ aid requests that it is "working closely with each state on their individual needs, eligibility requirements and FEMA disaster assistance policy."

The agency gave no timetable for making decisions and did not address questions about how it has decided so far to allocate disaster aid. In evaluating governors’ disaster requests, FEMA assesses the extent of damage caused by a disaster and states’ own fiscal capacity.

COVID-19 differs drastically from other disasters such as hurricanes, tornadoes and floods because the pandemic has not caused physical destruction, which FEMA closely measures to determine whether a "major disaster" occurred.

FEMA also measures human suffering. And with the U.S. death toll exceeding 21,000, the pandemic has caused more casualties than every other disaster combined since FEMA was created in 1979.

"I wouldn’t spend a lot of time thinking about it. I’d just turn it on," said Fugate, who ran FEMA during the Obama administration. "That to me would be pretty straightforward."

FEMA’s Crisis Counseling Assistance and Training Program gives states money to provide free services to help people cope with trauma caused by a disaster. The agency gave states $180 million from 2008 through 2016 to set up counseling programs after disasters, according to the Government Accountability Office.

Since March 16, every state has asked FEMA for crisis counseling money to help residents deal with the COVID-19 pandemic. Requests also were made by the District of Columbia and the territories that have been declared disasters — Puerto Rico, the U.S. Virgin Islands, Guam and the Northern Mariana Islands.

But the administration has approved the program for 10 states, all of which have been hit hard by COVID-19. Those states are New York, New Jersey, Michigan, Massachusetts, California, Louisiana, Illinois, Florida, Texas and Washington.

Several states with high numbers of COVID-19 infections, including Pennsylvania, Georgia and Connecticut, have not been approved to receive funds for crisis counseling, FEMA records show. Pennsylvania reported 18,228 cases on Saturday, more than all but six states, according to the federal Centers for Disease Control and Prevention.

In addition, FEMA has not approved any state request for other types of disaster aid such as legal services for low-income people, case management, and money for medical and funeral costs.

The only previous disaster to come close to COVID-19 in its national reach was Hurricane Katrina in 2005.

After Katrina destroyed parts of the Gulf Coast, President George W. Bush declared "emergencies" throughout the United States for states that received displaced Gulf Coast residents. Bush declared emergencies in every state except for Alaska, Hawaii and Wyoming, making those states eligible for disaster aid to cover costs of housing their new residents.