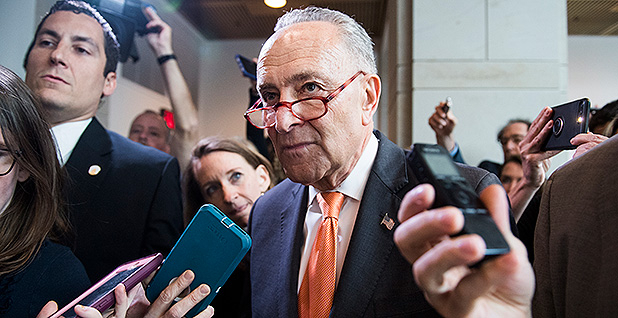 Senate Minority Leader Charles Schumer (D-N.Y.) spoke to reporters after a news conference in the Capitol Visitor Center, after a meeting on infrastructure at the White House was cut short by President Trump. Tom Williams/CQ Roll Call/Newscom

Top congressional Democrats involved in yesterday’s failed White House talks on infrastructure had hoped to revamp the electric grid as part of a $2 trillion package.

"We believe that to bring clean new energy around the country … we need a power grid modernized and updated," Senate Minority Leader Chuck Schumer (D-N.Y.) said in a press conference on Capitol Hill after leaving the brief White House meeting. "We believe in modernizing our transportation fleet with electric cars."

Ambitious plans to carry out elements of the Green New Deal appeared all but dead after the planned sit-down on infrastructure — a priority issue for many in both political parties — abruptly ended minutes after it started.

President Trump told reporters in the Rose Garden that he walked out of a meeting with Schumer and House Speaker Nancy Pelosi (D-Calif.).

But Democrats claimed the president did not enter the talks in good faith and asserted their commitment to combating climate change by investing in green energy.

At the Capitol, Schumer held up a 35-page plan that he said outlined his infrastructure priorities, including spending $80 billion to "bring innovation to America’s energy grid." The plan also calls for investing in research, power grids, investments in cybersecurity programs, interregional transmission lines and tech-neutral tax credits for clean energy.

"These investments will help move clean, renewable power, such as abundant wind power from the Midwest, to areas without as many renewable resources," the plan says.

And despite the shutdown in talks at the White House, several Democrats asserted that some of their green energy goals were still achievable.

"Donald Trump is on again, off again. We can’t base our actions on his mood," said Rep. Earl Blumenauer (D-Ore.). "He’ll have 50 different positions in the next month. He’ll change his mind."

Others echoed the optimism.

"I see it as a temporary hiccup along the way," said Rep. Paul Tonko (D-N.Y.), chairman of the Energy and Commerce Subcommittee on Environment and Climate Change.

Charging stations, storage, grid modernization and weatherization were pieces of legislation that could advance on their own, he said.

"We’re just saying we need to do our thing for the green element of the infrastructure bill so that when it happens, if it happens, we are there at the table defining what our perspective is," Tonko said.

The White House drama occurred on the same day the House Energy and Commerce Committee was holding a hearing on grid modernization.

The committee’s "Leading Infrastructure for Tomorrow’s (LIFT) American Act" would provide $4 billion over five years for electric grid infrastructure, focusing on security and resiliency. It would include funds to speed up grid recovery after extreme weather events.

But it’s unclear exactly where Democrats and Republicans could find common ground on energy spending. While some Republicans have expressed openness to securing the grid, they have dismissed major green stimulus efforts as too costly.

"I think the debate for us is the resiliency," said Rep. John Shimkus (R-Ill.). "So it’s more if we are having bigger, more powerful storms, how do you develop a transmission grid that can withstand that? My district is big, wide, and they are huge, and you want to make sure they withstand. We’ve had major storms come through."

He added, "I raised the issue of false expectations. If a community wants this $500 million grant, they have to still put up a cost share. Most communities in my district can’t do a cost share for $500,000."

Industry sources expressed disappointment at yesterday’s failed meeting, and some said they didn’t find anything objectionable in the Democrats’ wish list. But they called for permitting reform — which Trump has already pushed through executive order — to be a part of the energy discussions.

Christopher Guith, CEO of the U.S. Chamber of Commerce’s Global Energy Institute, asserted at the House Energy and Commerce Committee hearing that it "shouldn’t take longer to permit a project than it does to build it."

And that could be a nonstarter for Democrats.

"We have had a number of initiatives that have done streamlining," Blumenauer said. "As a practical matter where there are problems usually with the permit process it’s because people have short-circuited [the process]. They didn’t spend the time to listen to what the public wanted. They didn’t follow the law."