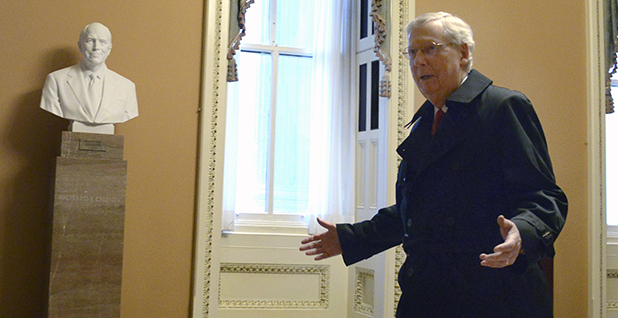 Senate leaders are continuing talks on a way out of the shutdown impasse, even as congressional Democrats are rejecting President Trump’s proposal to reopen the government for three weeks in exchange for a "large down payment" on his border wall.

McConnell has largely remained on the sidelines until this week when he set up competing votes to end the shutdown, both of which failed yesterday (E&E News PM, Jan. 24).

"At least they came together for this, this is progress, but it’s only real progress if you go another step," Senate Appropriations Chairman Richard Shelby (R-Ala.) told reporters.

Shortly after the doomed Senate votes, which resulted in the Democrats’ proposal to reopen government for two weeks garnering two more votes than the Trump proposal that included the $5.7 billion he wants for the border wall, White House spokeswoman Sarah Huckabee Sanders announced the administration was receptive to a three-week continuing resolution but with a familiar caveat: "if there is a large down payment on the wall."

A spokesman for Schumer said Democrats "have made clear to Leader McConnell and Republicans that they will not support funding for the wall, prorated or otherwise."

While the Senate is scheduled to be in session at noon today, the House is gone until next week, suggesting any reprieve to the standoff is unlikely until after the weekend.

Federal employees today will miss their second paycheck of the shutdown, but at least one Republican senator said he doesn’t see that as a breaking point for negotiations.

Kennedy likened federal employees to an infamous scene in the movie "Pulp Fiction" in which a character’s head is blown off when a gun accidentally discharges in a car.

"They’re kind of like Marvin in ‘Pulp Fiction,’" he said. "They got shot in the face, and they really didn’t even have a dog in the hunt. They’re in the middle of all this."

"My priority is get the government open again, get people back to work, and provide for border security," Kennedy said.

Sen. Mitt Romney (R-Utah), who voted for both the Trump and Democratic proposals on the Senate floor yesterday, said the way out of the shutdown is for leaders from both parties to "sit down and talk."

"We can’t just have the lack of communication that prevents us from getting to a deal," he told reporters. "It’s simply wrong that we have hundreds of thousands of Americans not getting paid for their work, wondering whether they can get their bills paid."

Romney added, "The president’s proposal was the best one. The Democrats’ proposal was certainly not as good, but it would have gotten government open, and that’s why I voted for it."

But House Democratic Caucus Chairman Hakeem Jeffries (D-N.Y.) said his party has "not moved off" its position: Open the government first, then have a bipartisan discussion about immigration.

"This is a battle for the heart and soul of the American people, and clearly and repeatedly over the last several weeks, they are siding with our reasonable position that we have to open the government first," he told reporters.

Frustrated senators from both parties took to the Senate floor yesterday to argue for a clean CR to reopen the government for three weeks, a period during which they pledged to work on a bipartisan border security package.

"This is our best option at this point in time for resolving this shutdown," said Maryland Democratic Sen. Chris Van Hollen, who said nevertheless it was not his "preferred solution."

But a three-week CR would "allow feds to get back to work and will make sure they all get paid," Van Hollen said.

Sen. Lindsey Graham (R-S.C.) said a potential bipartisan border security agreement would include money for more immigration judges and agents on the border, adding that he has "never been more optimistic than now" about the shutdown being resolved.

He and Sen. Rob Portman (R-Ohio) said it would not entail building a concrete wall but rather would be a border security plan that’s supported and recommended by experts.

"More sensors, cameras, judges and screening for drugs going through," Portman said. "These are things that both parties want to do."

Sen. Johnny Isakson (R-Ga.) reminded the chamber that the 1995-96 shutdowns during the Clinton administration led to the Monica Lewinsky scandal. "Idle hands are never good," he said.

West Virginia Sen. Joe Manchin, the lone Democrat to vote for Trump’s plan yesterday but one of several senators to endorse both amendments, called the shutdown "absolutely horrific."

"We are not serving the public, we’re all guilty," Manchin said.

Sen. Lisa Murkowski (R-Alaska), who also supported both bills yesterday, called them "flawed measures" but said they created some "hope" because it was an opportunity to come together and express views.

"I know it does not deliver a check to people tomorrow, but our goal is push these negotiations forward," she said.