Trump dines out on shark-fin soup 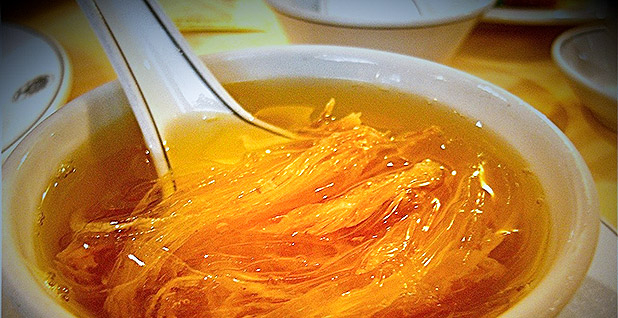 President Trump’s Vietnamese hosts served him shark-fin soup instead of his customary steak Saturday in a culinary move that may have had political undertones.

Presented as the fifth course at Saturday’s State Dinner in Hanoi, the soup was at the very least far more adventurous than Trump’s standard beefy fare. In addition to shark fin and shrimp, the soup included "fish maw," according to the menu.

But it’s the shark fin in the soup, while handsomely presented by female servers in pink dresses with cream silk pants and male servers in maroon dinner jackets, that may leave some with a bad taste in their mouth.

"The barbaric practice of ‘finning’ sharks at sea and returning their carcasses to the ocean has rightly been outlawed in the [United States] since the 1990s, as it is in many countries, but not all," noted Alistair D.M. Dove, vice president of research and conservation at the Georgia Aquarium.

In an email today, Dove added that he cannot comment "on another country’s policy choices with respect to sharks."