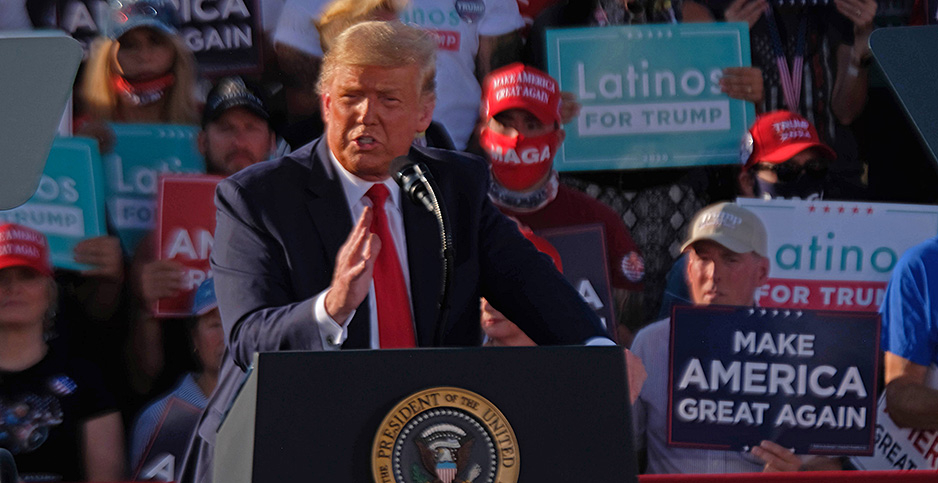 President Trump has been touting his environmental record on the campaign trail, but new reports find that his administration has dramatically slowed enforcement of the major environmental laws. Christopher Brown/ZUMA Press/Newscom

The record was barely better under the Clean Air Act: 50% fewer cases were prosecuted.

DOJ typically pursues enforcement cases that are referred by EPA.

Uhlmann, who is now a professor at the University of Michigan Law School, laid most of the blame at the agency’s feet.

"Fewer Clean Water Act and Clean Air Act prosecutions adds up to dirtier water and dirtier air. There is no way around it," he said in an interview. "The Trump EPA is running from its core public health and environmental protection mission."

Uhlmann’s findings undercut what has been a primary Trump team message since it took office: Instead of pursuing a sweeping regulatory agenda like the Obama administration, this EPA would focus on the nuts and bolts of cleaning up the country’s air, water and hazardous waste sites — including by enforcing the country’s laws.

But Uhlmann, who worked at DOJ for 17 years, including as its top environmental prosecutor, found that at least in the first two years of the administration, the opposite was true.

Uhlmann’s Environmental Crimes Project studied environmental criminal prosecutions in the 14 years from 2005 to 2018 — when the most up-to-date information was available.

Those numbers revealed a decline at the end of the Obama administration. But once Trump took office, he found, "the bottom fell out."

The drop in Clean Water Act cases is particularly notable, he said, because that law provides the most straightforward path to bringing a criminal prosecution: If you discharge pollutants into a waterway without a permit — or in violation of a permit — you’re liable.

"A 70% drop in water pollution prosecutions can only be explained by the fact that the Trump administration has made a concerted effort to pull back on Clean Water Act enforcement," he said. "There is no other way to explain the historically low number of cases."

DOJ and EPA have pushed back on Uhlmann’s findings, saying they are not representative of the administration’s work.

"In recent years, we have concentrated our resources on pursuing large, high-impact cases involving gross violations of our environmental laws," Clark said in an emailed statement.

And Clark said the number of pesticide cases "has increased by several hundred percent as well as focus on illegal smuggling and fraudulent COVID-19 remedies."

But Uhlmann accused DOJ of misdirection.

By "every metric" to determine the "quality" of a criminal prosecution, he said, this administration is underperforming, including felonies vs. misdemeanors, fine amounts and length of jail time imposed.

Further, he said no experienced prosecutor would argue that pesticide cases should take precedence over Clean Air Act and Clean Water Act prosecutions.

Doug Parker, who worked in EPA’s Criminal Investigation Division in multiple administrations over more than two decades, said Uhlmann’s findings are a product of this administration’s enforcement philosophy.

"You have an agency that has deemphasized enforcement. You have, for a period of time, less agents and less supportive U.S. attorney’s offices and, at DOJ, more ambivalence toward these cases," said Parker, who is now a consultant at RPO Strategies.

"If all three of those legs are weakened," he said, "that’ll hobble your stool."

For EPA enforcement chief Susan Bodine, Uhlmann’s paper adds to what has not been an easy year.

The longtime Republican spent much of 2020 defending her five-month-long controversial COVID-19 enforcement policy, which signaled to companies that they could get out of routine monitoring and reporting of pollution, including leaks (Greenwire, Aug. 31).

"It surprised me that he used prosecutions, which is a lagging indicator," she said, bringing up the report unprompted. "It’s far more indicative to look at the leading indicator."

She argued that EPA’s initial investigations had been declining from 2011 to 2017 but that the Trump EPA "finally turned that around in 2018." Uhlmann’s report shows that prosecutions dropped in 2014, but he said that was probably because of a lack of resources at a time when Republicans controlled Congress.

Bodine added that the 2020 numbers have not been finalized, "but they increased again even though we were in a COVID situation."

But other reports are supporting Uhlmann’s findings.

It analyzed enforcement inspections in the states of members of the Senate Environment and Public Works Committee, as well as the districts of lawmakers on the House Energy and Commerce Committee.

The group found that the median decline in inspections was 17% in the congressional districts and 14% in the states it analyzed during the Trump administration compared with the previous 16 years.

EPA spokesman James Hewitt said that the agency is still reviewing the report but that the group "does not have a good track record of accurately interpreting" the agency’s enforcement data.

For inspections, Hewitt said EPA is continuing to develop tools to target potential violators and "allow us to use our inspection resources more efficiently."

And he criticized the report’s reliance on average penalty amounts. When looking at total penalties, "there is a different story," including that the Trump administration has nearly doubled the Obama administration in civil penalties and criminal fines recovered.

Environmental Enforcement Watch tonight will hold a virtual event, "Democratizing Environmental Data." The goal is to show how environmental laws are being followed and enforced in congressional districts of lawmakers who sit on oversight panels in Congress.

Uhlmann acknowledged that there has been a slight uptick in criminal prosecutions under the country’s hazardous waste law, the Resource Conservation and Recovery Act.

But he took issue with the argument from EPA that prosecutions are a "lagging indicator."

He said some of the decline could be attributable to decreased EPA agent resources from the Obama administration.

"But that does not come close to explaining why the numbers were even worse during the second year of the Trump administration," he said, "nor why the Clean Water Act and Clean Air Act cases fell so drastically both years."

"It would be far preferable," he said, "if the Justice Department showed more fealty to the facts and didn’t make up numbers out of whole cloth to justify its paltry enforcement efforts."