Trump donates $100K of his salary for monument repairs 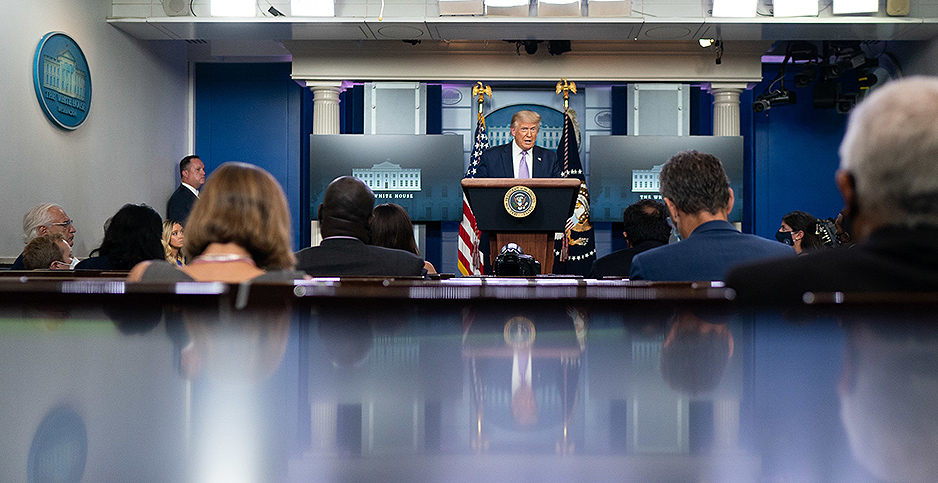 President Trump, pictured at an Aug. 13 press briefing, donated $100,000 from his salary to the National Park Service. Shealah Craighead/White House/Flickr

President Trump has donated $100,000 of his 2020 salary to the National Park Service to help pay for repairs on national monuments.

It marked the second time in three years that Trump has turned over part of his earnings to the park service. In 2017, the president donated $78,333 to help pay for the restoration of a historic house at the Antietam National Battlefield in Maryland (Greenwire, Oct. 23, 2017).

"I promised YOU I would not take a dime of salary as your President," Trump tweeted Friday night. "I donate the entire $400,000! It is my honor to give $100,000 to @NatlParkService to help repair and restore our GREAT National Monuments. So important to our American History! Thank You!!"

His tweet included a photo of the check, which was dated July 13.

Interior Secretary David Bernhardt, who oversees the 419 national parks, followed up with his own tweet. He praised his boss and noted that news of the president’s donation of his quarterly salary came only days after Trump signed the Great American Outdoors Act, a law that will create a national trust fund to begin paying for a $20 billion backlog in maintenance projects on public lands.

"Following @realDonaldTrump’s enactment of the greatest conservation funding legislation in U.S. history, he has again demonstrated his unwavering commitment to improving our national parks, public lands, and monuments," Bernhardt said in his tweet.

Trump did not specifically tie his donation to repairs to NPS monuments vandalized in recent weeks, but the issue has been a major focus for both the park service and the president since late May, when protesters began toppling statues as part of the nationwide protests against police brutality (Greenwire, July 16).

Irked by the toppling of a statue of Confederate Brig. Gen. Albert Pike at Washington’s Judiciary Square, Trump in June reportedly ordered Bernhardt to fix it and put it back up after it’s repaired.

At the same time, he called for a 10-year prison sentence for anyone who vandalizes or defaces a monument or statue on federal property, denouncing those who want them removed as "thugs" who are seeking to erase U.S. history.

And on a visit to Mount Rushmore National Memorial over the Fourth of July weekend, Trump announced that he had signed an executive order requiring the Interior Department to create a national garden featuring the statues of 31 "American heroes" chosen by him.

Trump, a billionaire, has given his $400,000 annual salary to a variety of federal agencies, including the National Institute on Alcohol Abuse and Alcoholism and the Agriculture Department.

His donation to the park service three years ago paid for repairs to the Newcomer House at the Antietam battlefield in Sharpsburg, Md.

The house, which sits next to a 24-foot statue of Confederate Gen. Robert E. Lee, was situated near a bridge that became a thoroughfare for both Union and Confederate troops, who participated in the bloodiest fight in U.S. history at the Battle of Antietam on Sept. 17, 1862. The Lee statue was damaged by vandals in June.