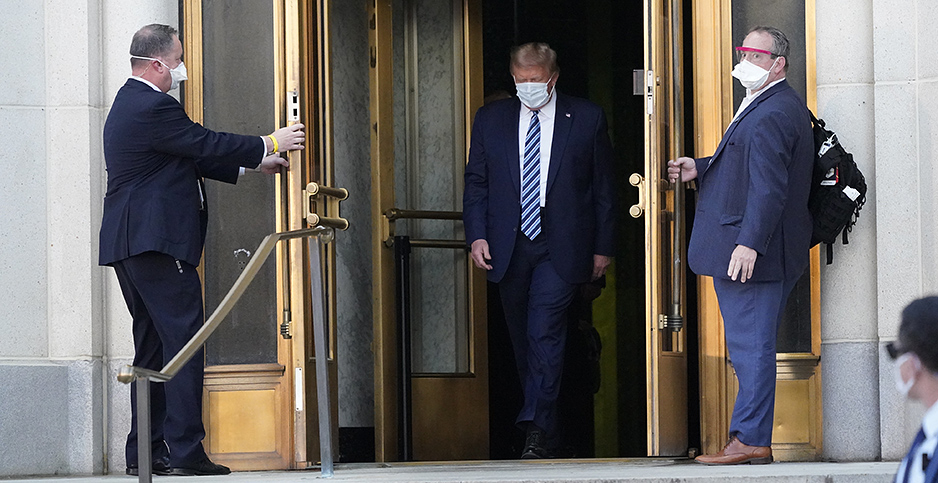 President Trump was discharged yesterday from Walter Reed National Military Medical Center after days of uncertainty about his condition in the hospital.

Reports that the president’s oxygen levels had dropped repeatedly and that he was being treated with drugs often reserved for severely ill patients raised questions about the seriousness of his symptoms over the weekend.

But rather than urge his followers to take the virus seriously after contracting it himself, Trump continued to downplay the danger of the deadly pandemic.

The attitude parallels his cavalier approach to climate change.

Trump tweeted yesterday afternoon, several hours before being discharged, that he was "feeling really good" — and he told his followers not to fear COVID-19.

"Don’t let it dominate your life," he went on. "We have developed, under the Trump Administration, some really great drugs & knowledge. I feel better than I did 20 years ago!"

I will be leaving the great Walter Reed Medical Center today at 6:30 P.M. Feeling really good! Don’t be afraid of Covid. Don’t let it dominate your life. We have developed, under the Trump Administration, some really great drugs & knowledge. I feel better than I did 20 years ago!

Since the onset of the pandemic, Trump repeatedly has minimized its seriousness.

He also urged states to reopen early in the pandemic, against the advice of public health experts nationwide. The president has touted the use of unproven, experimental drugs. His administration has been widely criticized for a lack of federal guidance on safely reopening the economy.

Meanwhile, the virus has killed more than 209,000 people in the United States.

Trump’s behavior isn’t surprising. It’s similar to his continued denial of the realities of climate change, even as wildfires, hurricanes, extreme heat and other climate-related disasters wreak havoc across the United States year after year.

Telling followers not to fear COVID-19 echoes a brand of climate denial common among conservative policymakers in the United States — the idea that while climate change may exist, its consequences aren’t that serious.

EPA Administrator Andrew Wheeler, for instance, has said that he believes climate change is happening and that human activities may be to blame.

But he repeatedly has suggested that it isn’t a particularly pressing concern. He told Fox Business Network last year that he didn’t see climate change as an "existential threat" and told Reuters last year that it wasn’t his top priority.

Scientists repeatedly have debunked these arguments. An overwhelming number of studies point to the serious negative consequences of climate change.

Many of these consequences are already unfolding around the United States in the form of rising sea levels, extreme heat, and the increasing severity of disasters such as hurricanes and wildfires. Yet the reality of these events hasn’t prompted any increased urgency on climate action from the Trump administration.

Similarly, it seems, even contracting the virus himself hasn’t inspired any renewed urgency in Trump about the pandemic.

Trump’s tweet also attempted to reassure the public that his administration is addressing the pandemic with new drugs and research. In some ways, this statement also parallels some of Trump’s responses to the issue of climate change.

The Trump administration has invested heavily in vaccine development efforts from firms including Pfizer Inc., Moderna Inc. and Johnson & Johnson. But it has also been criticized for touting experimental COVID-19 therapies without adequate scientific evidence that they’re effective.

Early in the pandemic, Trump encouraged the use of a drug called hydroxychloroquine, typically used as a malaria drug, to treat COVID-19 patients. But doctors cautioned there was no credible evidence that the drug was effective against the coronavirus, and they warned that it shouldn’t be widely employed without further research.

In August, the Food and Drug Administration authorized the use of blood plasma from people who have recovered from the coronavirus as a treatment for other COVID-19 patients. But public health experts criticized the decision as premature, and officials from the National Institutes of Health urged the FDA not to go through with it — noting that more research was needed.

When asked about climate change, Trump has suggested that his administration is addressing the issue. But the actions he points to tend to be false, exaggerated or ineffective at addressing climate change.

In this election season’s first presidential debate, moderator Chris Wallace asked the candidates what they believed about the science of climate change and what they would do to confront it. Trump responded that "we have now the lowest carbon" — a false statement, as the United States has the second-highest domestic carbon emissions in the world.

He went on to suggest that the wildfires plaguing the western United States could be addressed with better forest management. But experts widely agree that changes in forest management won’t completely negate the effects of rising temperatures and increasing droughts, which research suggests increase the severity of Western wildfires.

Trump also noted that his administration is "planting a billion trees" — possibly a reference to a promise he made in his State of the Union address earlier this year to join a global tree-planting project known as the Trillion Trees Initiative.

While forests do absorb carbon from the atmosphere and can be one useful form of climate action, reducing the burning of fossil fuels is the primary step needed to cut the country’s greenhouse gas emissions.

"Disregarding science is reckless," Anthony Leiserowitz, director of the Yale University Program on Climate Change Communication, said in an email to E&E News.

In response to both Trump’s attitude toward his own illness and the question of climate science, he added, "He’s putting himself, everyone around him, and the entire world at risk."