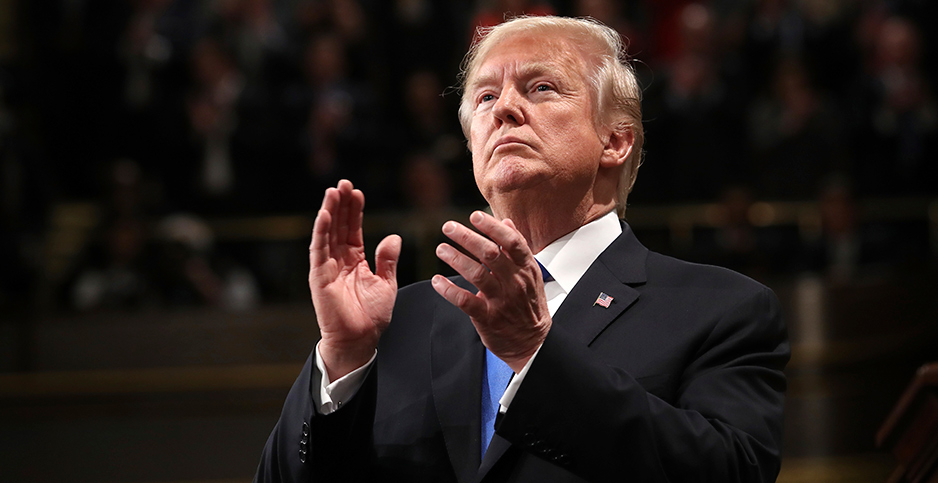 President Trump clapped during the State of the Union address in the House chamber last night. Win McNamee/Pool/Associated Press

President Trump tried to strike a unifying tone on controversial issues during his first State of the Union address. Climate change was not one of them.

Trump opened his speech by paying homage to American strength during a year of "floods and fires and storms," with some first responders attending the speech as his guests. He never mentioned rising temperatures.

"We saw the volunteers of the ‘Cajun Navy,’ racing to the rescue with their fishing boats to save people in the aftermath of a devastating hurricane," Trump said.

"We heard tales of Americans like Coast Guard Petty Officer Ashlee Leppert, who is here tonight in the gallery with Melania. Ashlee was aboard one of the first helicopters on the scene in Houston during Hurricane Harvey. Through 18 hours of wind and rain, Ashlee braved live power lines and deep water to help save more than 40 lives," he added.

"We heard about Americans like firefighter David Dahlberg. He is here with us, too," Trump said. "David faced down walls of flame to rescue almost 60 children trapped at a California summer camp threatened by wildfires."

Many of Trump’s policies, however, could exacerbate warming and expose more people to climate-fueled catastrophes, like the wildfires that ravaged the West and the severe flooding from Hurricanes Harvey, Irma and Maria.

The president has riled much of the public and scientific community with his contrarian views on climate change. But by not mentioning it, Trump never addressed an issue that scientists see as a clear and present threat.

Trump has sought to expedite energy development by removing regulations to promote an "energy dominance" agenda. The administration has credited energy with bolstering the economy and reshaping geopolitical dynamics. Trump officials said those realities put the United States and its allies in a stronger position.

Experts argue that Trump is not responsible for the energy boom. Asian demand buoyed coal during Trump’s first year, but analysts forecast a decline this year. Recovering oil prices were a boon for oil and gas drillers that had become more efficient during recent lean years.

Congressional Republicans, though, defended Trump’s record on energy and the role his policies have played.

"He’s done so much to reduce the regulations," Sen. Steve Daines (R-Mont.) said after the speech. "He’s taken the boot off the neck of American energy producers."

Sen. Joe Manchin (D-W.Va.) also praised Trump for creating some regulatory breathing room for the coal industry — not least by moving to gut carbon emissions regulations for power plants — though he indicated that the president had less to do with the oil and natural gas industry’s success.

"You’ve been here long enough to understand that whoever’s up top there is going to take credit," Manchin said. "That’s just the way it is."

He was often the only Democrat to offer Trump standing applause.

Obama also promoted fossil fuels, but he was less likely to embrace those moves publicly. That leaves an opening for Trump, who seems willing to take credit for it. It was Obama who signed legislation ending a 40-year-old ban on crude oil exports; and it was Obama who created a process to quickly approve exports of liquefied natural gas.

Another difference: Obama cared about his progress and reputation on climate change. Trump does not.

The president’s speech came days after he made several false statements about mainstream climate science in an interview with British TV personality Piers Morgan (Climatewire, Jan. 29).

It also comes after leaked documents showed Trump’s main legislative priority this year could prove the biggest threat to environmental and climate policy.

The administration said the document, obtained by The Washington Post, was outdated. Administration officials have said changes to those laws can be made without sacrificing environmental quality, and they criticized Obama for making permitting more cumbersome.

"Any bill must also streamline the permitting and approval process — getting it down to no more than two years, and perhaps even one," Trump said last night. "Together, we can reclaim our building heritage. We will build gleaming new roads, bridges, highways, railways and waterways across our land."

Congressional Republicans are eager to hear more about the infrastructure bill, said Sen. John Barrasso (R-Wyo.), chairman of the Environment and Public Works Committee, after the speech. Their first chance could come tomorrow at a GOP retreat.

But for critics of the president, they see the infrastructure bill as the latest iteration of attacks on environmental safeguards.

"The scarce details we do have point to an approach that emphasizes public-private partnerships and sacrifices environmental and other protections for speed," Grant Carlisle, director of advocacy for Environmental Entrepreneurs, said in a statement.

Detractors say the administration’s focus on fossil fuels, combined with its signal to leave the Paris climate accord, demonstrates a failure of global leadership on climate change. The White House has pushed back, saying fossil fuels have a place in the climate conversation, since they’ll still be used for decades.

The White House has made a concerted effort to shop its energy wares to other countries. Its posture on trade with respect to energy — particularly oil, gas and coal, and also nuclear technology to a limited degree — clashes with its more protectionist streak on other matters.

The Trump administration has said the United States is dealing from a position of strength on energy. Exports of natural gas and oil are booming. A "clean coal alliance" to promote gas and coal is in the works.

"For the first time in nearly a decade, the United States, under President Trump’s administration, has begun recognizing and utilizing our own energy resources as a strategic, American asset," Independent Petroleum Association of America President and CEO Barry Russell said in a statement. "The impacts of America’s energy resurgence are being felt around the world."

That wind and solar power and electric vehicles get so little attention is the glaring blind spot of Trump’s energy dominance framework, clean energy advocates said. The White House recently dealt clean energy its biggest blow of the Trump administration by slapping tariffs on imported solar products. It wasn’t as bad as the industry expected, but analysts said it could set solar back about two years.