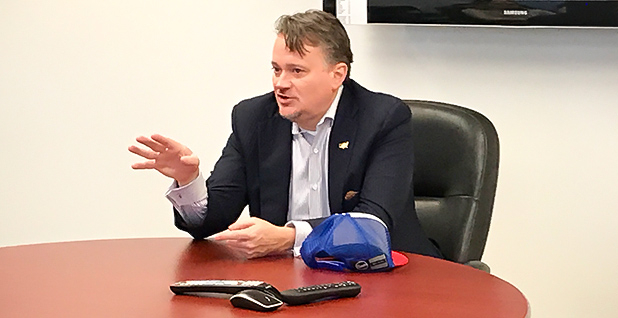 The 50-year-old Missouri native resigned abruptly last Tuesday as President Trump’s top energy aide after failing to receive a permanent security clearance over his admitted use of marijuana in 2013.

With a year of the Trump White House behind him — and extensive experience on and off Capitol Hill — Banks is plotting his next step.

"Going back to be a full-time swamp creature is certainly an attractive option," he joked during an interview late Friday at E&E News’ Washington office.

Some see Banks — who was special assistant to the president on international energy and environment — as a victim of a White House crackdown on staffers who lack permanent security clearances in the wake of the resignations of two staffers who had been accused of spousal abuse.

The administration, Banks said, is mulling positions for him at the Interior or Energy department. It’s not clear yet what’s available, he said, or whether it would be a "good fit."

He said he plans to rejoin the American Council for Capital Formation (ACCF) next month and has taken a seat on the advisory board for ClearPath, the conservative clean energy advocacy group.

Before joining the Trump administration last February, Banks worked as the main contact for climate change issues at the U.S. Mission to the European Union as a CIA legal and economic analyst and as an adviser in the George W. Bush White House’s Council on Environmental Quality. He also served as a Republican deputy staff director of the Senate Environment and Public Works Committee and as ACCF’s executive vice president.

For the interview, Banks wore a dark blue suit, an open collar, and bright stars-and-stripes socks. He discussed his time at the White House, his abrupt departure and what’s ahead for his colleagues and the "clean coal" initiative he had been leading.

How do you blow off steam?

I love flea markets. It’s really going to flea markets and collecting stuff I’m really into. Vintage baseball cards, coins, "Star Wars" toys. But I will definitely spend a lot of time over the next months getting healthy again, working out and going to the gym.

Tell us about your childhood in New Madrid, Mo.

I grew up on a farm without any neighbors. That taught me to appreciate how great it is to have friends and spend as much time having fun with them. It was a soybean farm.

I’m descended from a long line of bootleggers, sharecroppers and peasants. My family has lived in southeast Missouri for over 200 years. That part of the United States was a melting pot for a couple generations; that’s why my ancestors include slaves, Native Americans and European colonists.

What was it like working in the Trump White House?

Did you enjoy it?

It’s really an honor to be given that responsibility. But it’s tough; you go through the physical, emotional strain. It’s largely a thankless job inside the White House.

Everyone on the outside appreciated me. But inside the White House, jobs like mine responsible for managing parts of the government don’t get much visibility.

Will the White House replace you?

I think they plan to. It may take some time to find someone. I didn’t have time to give any recommendations. I wasn’t even allowed to say goodbye. That was the uncomfortable part.

With whom did you work most closely at the White House?

Mike Catanzaro and I share the energy portfolio. That relationship was the most important to me in the White House.

And then you have what I considered to be "team energy." You had the folks reporting to me, and National Security Council; you have the vice president’s office, the Office of Management and Budget — oftentimes, you’re with energy folks there. CEQ to a lesser extent. There aren’t a whole lot of shops who are full-time energy people.

I just saw a report [that White House Chief of Staff John Kelly] is going to reform the process, make it, I guess … transparent to the people who are either involved or have to ultimately sign off on it. My process, I had a permanent clearance for 14 years, CIA, State, Bush White House.

It was like an hour interview with the FBI. They’re looking over your paperwork; you’re going through all your responses. Then that’s it. Didn’t hear anything. Certainly didn’t hear there was a potential problem with my clearances.

I didn’t know until Tuesday. I get a call at 4:30 p.m. from White House counsel saying they want to meet with me at 6 p.m. Three people in the room. They just say, "Look, your job requires a permanent TS-whatever, and we’re not going to grant you a clearance." And I’m like, "Why?"

Did you fail a drug test?

I self-reported. I’ve had a drug test. They gave me a drug test. So this is one question that I have: … If it had been something, like, had I lied, right, and in their investigation they found, "Oh, he smokes pot," or if it were a revelation that they just discovered, like, two weeks or two months ago. … But I self-reported this a year ago.

I just don’t know why it took a year.

What about the other dozen or so White House officials with interim security clearances?

The process for each person is different. I hope I’m the only one. I hope everyone else gets cleared, they sail through and stick it out.

Is anyone invested in the "clean coal" initiative you oversaw?

It was Energy Secretary [Rick] Perry’s idea, the "clean coal" initiative. He announced it in Africa. The idea has been accepted by the administration, and what’s to be decided is the shape and form of its implementation. It’s going to be "clean fossil." It’s not just a clean coal coalition.

How much influence does coal executive Bob Murray have on the Trump White House?

The notice of a proposed rulemaking [for subsidizing coal and nuclear power], I would say, it reflects the reality that we are going to lose baseload power plants, because I was looking at this from a nuclear perspective. If you don’t fix the capacity and energy markets like PJM [Interconnection LLC], you’re going to lose a lot of those plants. They’re going to be prematurely shut down.

Is there actually talk of the Department of Energy using the emergency provision under the Federal Power Act to keep coal plants running?

There’s certainly some concerns that that would be illegal or highly vulnerable to litigation. I’ve heard about it. I just don’t know how actively discussed it is.